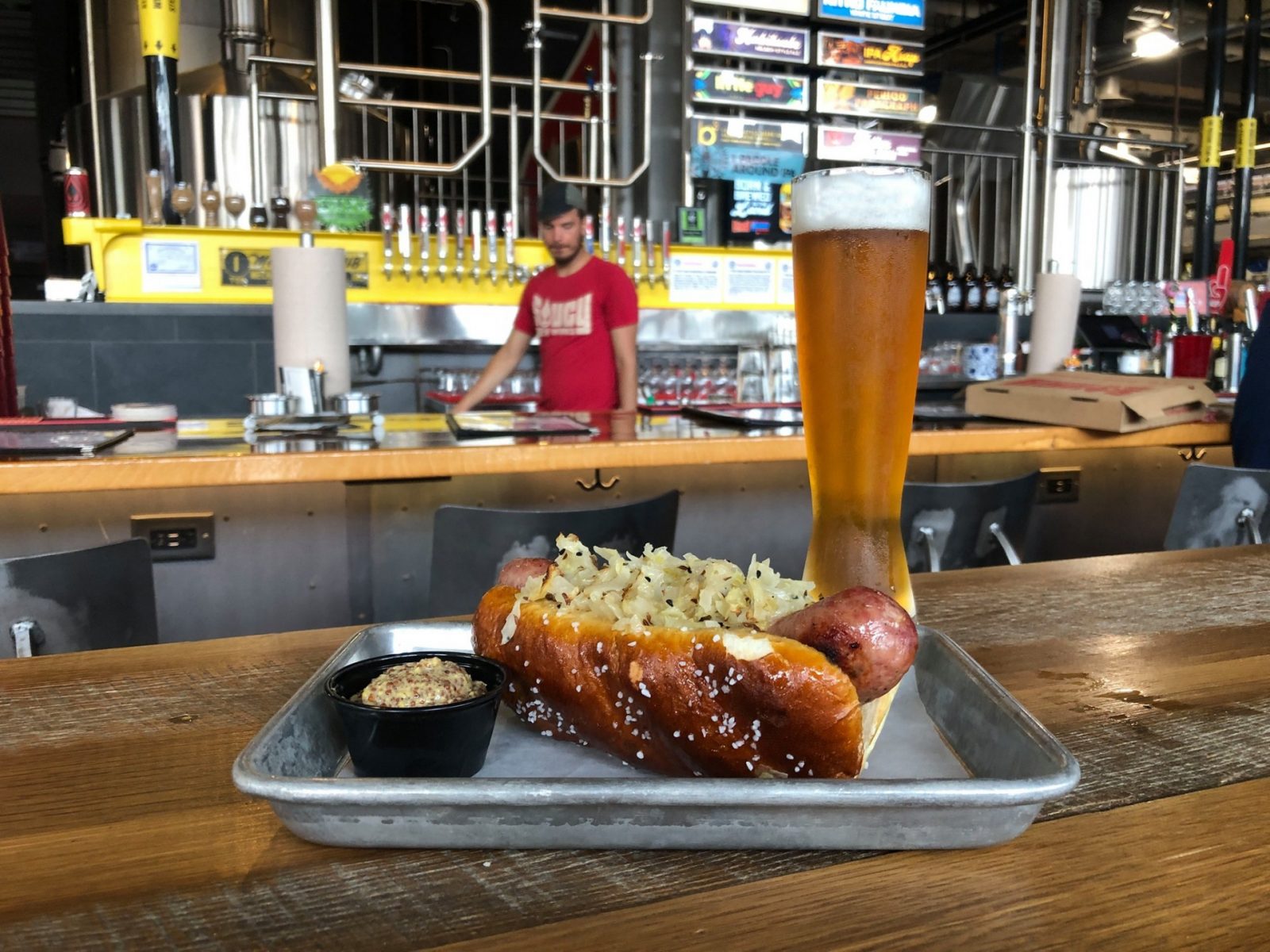 Click-or-treat: join our virtual candy hunt for a daily chance to win

Any craft beer enthusiast has, no doubt, had their fair share of coffee stouts or porters; but, it’s unlikely many have experienced a full-service brewery and taproom complete with an attached coffee shop.

For Columbus beer fans, that’s about to change, as the Cleveland-based Saucy Brew Works has just opened a new brewery and coffee shop, located at 443 W. Third Ave., by the Harrison West neighborhood.

According to Saucy Brew Works Marketing Manager Shelby Nicholson, the attached coffee shop will feature not only the traditional slate of prepared drinks, but also a single origin house roast from Columbia (which will be packaged and sold), as well as coffee drinks inspired by some of the brewery’s favorite beers.

One of these is a drink based off of What’s His Nuts, a vanilla stout with peanut butter and Honduran coffee. “We basically created a peanut butter vanilla latte, and it’s delicious,” Nichols said.

This expansion into Columbus marks a busy year for the company, which will—in addition to its two existing Cleveland locations—be adding a Detroit taproom and a new Cleveland production facility, although these aren’t scheduled to open until 2021 and late Fall 2020, respectively.

And even though the brewery now has a handful of locations either open or in the works, Nichols says that every Saucy Brew Works hub aims to create its own unique interior aura.

“We’re handling each space that we open differently, so none of them will look the same or have the same type of atmosphere,” said Nicholson. “So if you go to Cleveland, it’s a little more of an industrial feel, it really focuses on the brewery and being able to see that. In Pinecrest [their second Cleveland location] it’s a taproom and has kind of a floral, California West Coast feel.”

And while these both sound like thoroughly enjoyable locales, the brewery has created something both unique and desirable in Columbus.

The chic, spacious taproom is decked out in tasteful wood-topped tables, and stadium seating for a fun and immersive Gameday vibe (a pair of screens behind the bar will be playing Buckeye games), but that’s now what you’re likely to notice first.

What catches your eye are the swings. Arranged as seating for roughly half of the taproom’s tables are ceiling-mounted swings that move freely from polished metal chain links. According to Nicholson, the brewery hopes these will help guests to indulge in the “experiential dining” and drinking the taproom aims to create.

As for dining, a robust menu highlighted by fun, flashy pizza options, sandwiches, salads, and shareables will all be available to pair with a beer.

Because, of course, that’s what put Saucy Brew Works on the map in the first place: the beer. The new taproom will feature 20 different draft lines (and will even put on occasional guest beers from nearby BrewDog), in addition to a large selection of canned beer to go.

According to Nicholson, the brewery will sell its three perennial offerings—Habituale, a Kölsch-style ale; Juicy ASAP, a juicy American IPA; and Love You, Bye, a hazy imperial IPA—in addition to a list of seasonal and one-off taprooms brews. Some highlights from the current menu include Stealing Signs, an IPA featuring Idaho 7 hops (a favorite, and one of the most underrated, hop varieties); Other Barry, a blackberry tart ale; and Milton, a bourbon barrel aged golden strong ale.

And while the space won’t feature the full-scale commercial brewing of Saucy’s original Cleveland location, the Third Ave. location does contain a pilot brewing system where limited production beers or previously untested recipes will be made.

“All of our core beers and our bigger lineup will still come down from Cleveland, but we’re going to use the pilot system here for experiments, and if we find something that we brew here sells really well or is just awesome, then we’ll brew it in Cleveland too,” Nicholson said. “And we’re really excited about that.”

And at the end of the day, the brewery hopes to become a friendly, neighborhood hub to catch a Buckeye game, and maybe grab a great pizza or beer while you’re at it. “Our goal is to really just be kind of like the spot to hang out in Columbus, especially on gameday; we’re big fans of Ohio State,” Nicholson said.