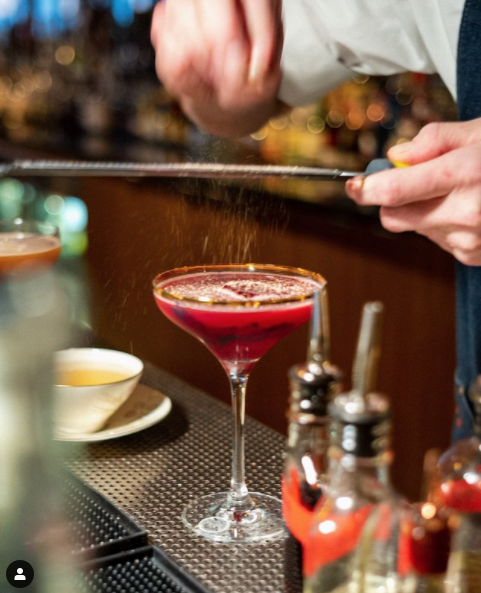 Where to dine out for New Year’s Eve

Although we’re not a fan of the weather, winter just might be the best season for drinks.

I mean, first of all, eggnog. Whether you love it or hate it, you have to admit it’s iconic. Then there’s hot toddies. And whether your favorite drink is hot or cold, there are a host of spices and flavors to combine for comfort in a cup.

We’ve rounded up some of the most delectable-looking drinks for you to try this season. Take a sip, or two, or three. Winter can be a bit of a drag, but these drinks are anything but boring.

With a title like “Raised by the Wolves,” this cocktail sure evokes images of the wintry wild. Featuring Bacardi rum, Irish whiskey, beet and raspberry cordial, ruby tawny port, lemon, and spices, we’re sure this will be an adventure for our palate, too.

Eggnog fans, look no further than this house-made beverage, made with heavy cream, egg, cinnamon, and nutmeg. We’re digging that cinnamon stick, too.

Oh, Hadley’s, where every drink looks like something out of our dreams. Forget about sugar plums—visions of this Eggnog Boozy Shake will certainly dance in our heads now.

Ah, peppermint ice cream. It’s great by itself, but it shines when you add milk, schnapps, whipped cream, and candy cane pieces.

Add sprinkles to just about any drink and we’re that much more pumped about it. In this case, they make us that much more excited to try out this Sugar Cookie cocktail.

Featuring cold brew, vanilla, Vietnamese cinnamon, and peppermint, this Peppermint Snickerdoodle draft latte sounds like heaven in a glass. Who doesn’t want to try a snickerdoodle in liquid form? We’re here for it.

We’re a firm believer that you can’t get tired of eggnog. The drink is so versatile, there are endless possibilities. Take this Chocolate Mint version, for example.

Nothing puts the snap in gingersnaps quite like whiskey. Echo Spirits’ Gingerbread Boulevardier features their straight rye whiskey with gingersnap Campari and spiced vermouth. We have a feeling we’ll order a second round.