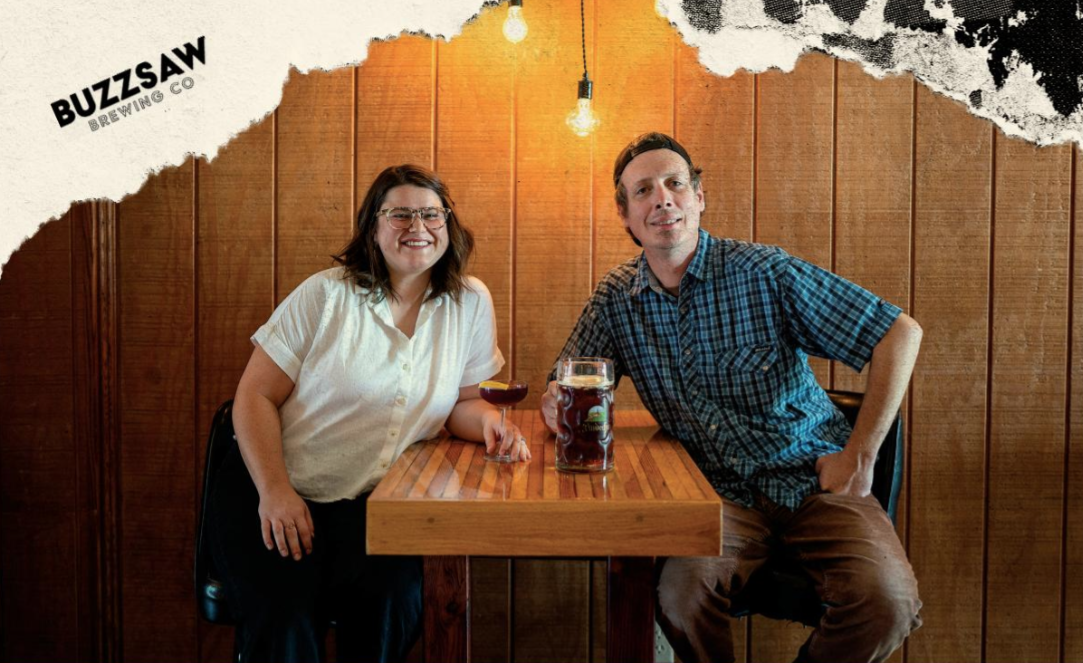 Take a long look around the Columbus beer scene. You’ll see some great stuff: the stalwart of Columbus Brewing, the wacky yet world-class IPA experiments out of Hoof Hearted, the trans-Atlantic choiceness of Brewdog.

One thing you don’t see, however, are any Columbus beermakers focusing on Belgian styles—that is, until now.

Buzzsaw Brewing’s love of the Belgian form goes way back. Like, way back. According to cofounder Andrew Watkins, during World War II, an American soldier serving in Belgium was rescued by a group of monks after becoming lost in a forest. They exposed him to Belgian beer (much of it is actually produced in monasteries), which he brought back to the states.

“He had a small gas station bar somewhere on the East coast,” Watkins said of the soldier. “And on tap there was Budweiser, Bud Light, Miller Lite, but also Chamay Blue. [Buzzsaw’s second cofounder Quinn Bartlett]’s dad ended up there once, and he fell in love with Belgian beer. That interest was passed down to Quinn, and then from him to me.”

And while the pair both value Belgian beer for its taste and versatility, Bartlett is also fond of the brewing process itself.

“[Belgian beer] was actually always difficult for me to make when I started home brewing. Because there’s not much in them; they were so simple, so you really have to dot your i’s and cross your t’s,” he said. “The ingredients list is pretty short, but the procedure list is very long. I think the simplicity of them is elegant.”

And early on, at least, simplicity seems to be the name of the game at Buzzsaw. Currently, the pair operates out of a small, unadorned industrial space just south of Main Street. They work on a brewing system featuring two custom-made fermentation tanks that can turn out a total of 750 cases per week, although to start, the brewers will likely be putting out about 500 cases a week.

This simplistic clarity shines through in their beer as well. 614 was lucky enough to get an advance tasting of Treasure Trove, Buzzsaw’s Belgian Tripel, at 9% ABV.

The beer exuded a simplicity and clarity of flavor that’s difficult to find among even some of the country’s best beermakers. The bright addition of Amarillo hops (a nice, subtle American twist) balanced by caramel malt and just the right amount of wheat in the grain bill created a smooth, delicious, drinkable brew that reminded staffers of we love craft beer. It’s nothing fancy; no crazy wood aging; no lactose; no quadruple dry-hopping; but that’s the beauty of it, and this beer absolutely shines.

The duo are currently waiting on a pair of permits, but once these are received, you can expect to see Buzzsaw beer three weeks later. The duo is eyeing this month as their likely launch.

The brewery plans to stay streamlined early on from the production standpoint as well. They will have two regular flagship offerings, Buzzsaw Pale Ale and Buzzsaw Blond, in cans and kegs, as well as several rotating beers (including a good mix of German lagers and the occasional contemporary American style), likely in kegs as well. While they don’t yet have a taproom of their own, they plan to distribute their kegged beer to a variety of craft beer bars throughout the city.

One of these is the nearby Grain and Grape, a long-standing, family owned neighborhood beer and wine bottle shop complete with a sleek taproom (featuring cocktails as well) and an eclectic selection of the best local and national craft beers.

Owned by the husband and wife team of Adam Fleischer and Samantha Smith, Grain and Grape will act as one of Buzzsaw’s “Home Away from Home,” according to Watkins.

And for Fleischer and Smith, their connection with Buzzsaw allows them to not only welcome deserving local brewers, but also display pride in the city’s East side, where a full slate of under the radar beermakers are popping up.

“Our personal thing is to focus on the eastern part of the county. Because we’re kind of at the edge ourselves, we’re sympatico with Homestead and Outerbelt and Buzzsaw and Parson’s North, all those breweries. We feel like we’re kind of in the same boat in that way.”

Watkins and Bartlett have also noted the friendships they’ve already established with fellow East-siders Nocterra and 2 Tones Brewing. So go enjoy the east side, Columbus. It’s rife with great beer—and 614 couldn’t be happier about that.