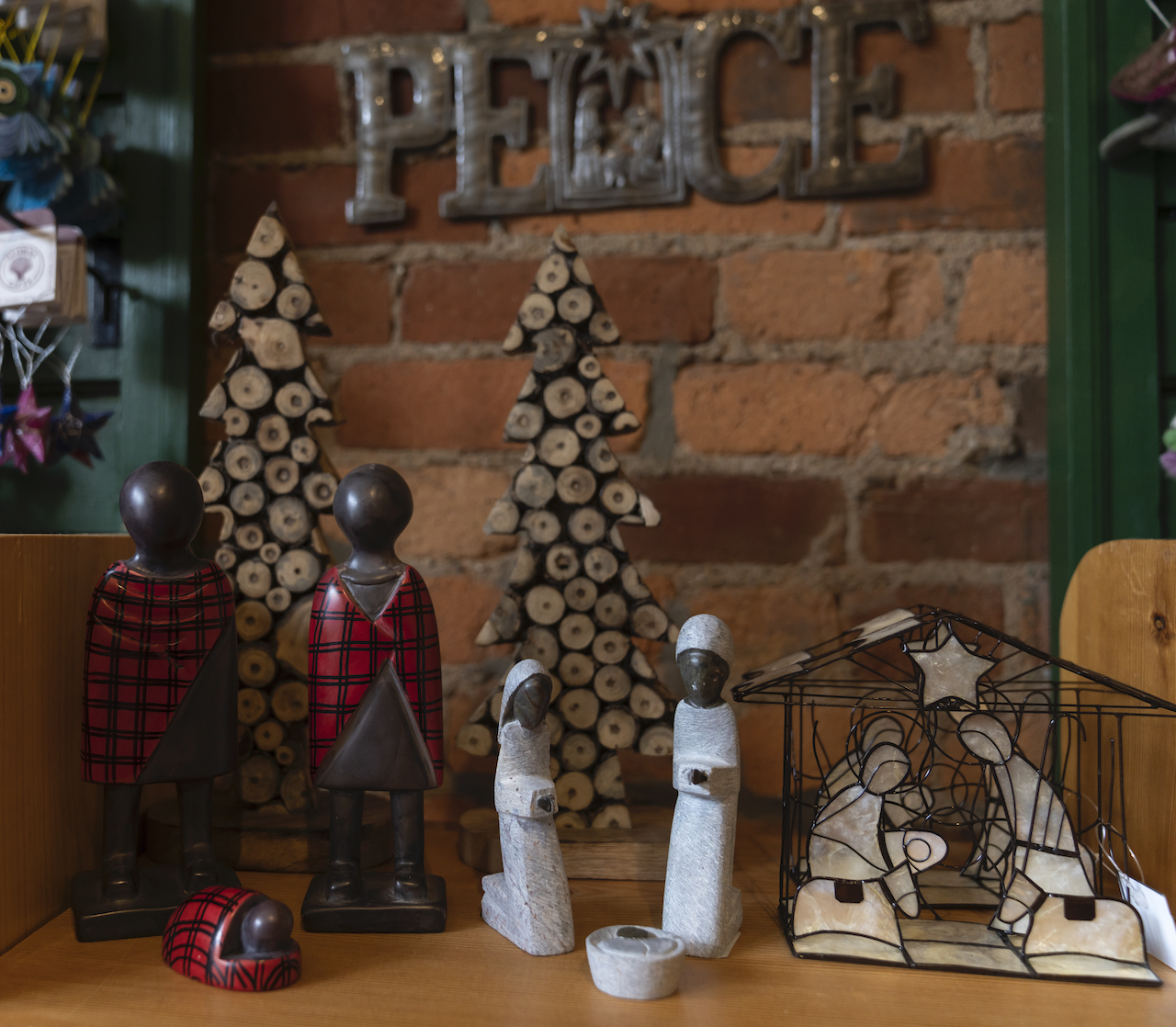 Shopping for unique holiday gifts and aiding in the fight for fair wages, safe working conditions, and environmental conservation globally has become a more accessible philanthropic practice in Columbus over the past half-decade. More than 45 retailers in the city are currently functioning to promote fair trade, a trading partnership that promotes a higher level of equity amongst international trading.

Global Gifts—a nonprofit organization and store nestled in the Short North—serves just that purpose. Originally birthed in Indianapolis, the small regional chain opened its capital city doors in 2014 after another local, separate fairtrade nonprofit, Global Gallery, decided to reorganize and reconsolidate at its current Clintonville hub.

“I really believe that fair trade is a relationship-building process where I think all of us in the fair trade movement are focused on a holistic approach to the way we do trade, and that means connecting with consumers of real people as to what their needs [are] and finding out what products they use on a regular basis,” said DeJong.

Relationship-building and conversations with artisans in Eldoret, Kenya, this past February is what also led current Global Gifts Executive Director Alissa Head to shelf a new item in Global Gifts. Head was hired in 2014 to open the Columbus shop due to her background in retail, nonprofit, and the handmade community and became executive director in May 2018.

After speaking with the artisan group Creation Hive about her personal knitting passion, Head discovered yet another talent of the Kenyan artisans. Now, the shop features knitwear products made of merino wool, which also goes hand-in-hand in supporting Elodret’s local textile economy.

“They’re already very talented artisans, but I don’t think any of us knew that they also knew how to knit,” said Head.

Head started the local chapter of the Fair Trade Federation, Fair Trade Columbus, in 2015. In 2018, Columbus became a Fair Trade Town and currently has one small step left to take to be considered official. Columbus Mayor Andrew Ginther was going to be asked to create a proclamation to declare the city a Fair Trade Town on World Fair Trade Day, but the pandemic put that on hold until 2021.

A member of both the Fair Trade Federation and Fair Trade Columbus, Global Gifts has ties to around 40 different countries in the global south. In its store, you’ll find whimsical wooden eyeglass holders, adorable wool alpaca figurines, and recycled Kantha jewelry, bags, and wallets from places such as Kenya, Ecuador, Bolivia, India, and Bangladesh. Another major cornerstone of fair trade is resourcing recyclable products that would otherwise end up in a landfill.

“Being in retail is not necessarily my dream job, but being in a retail place like this is very rewarding knowing that the items that we make are helping to support economic opportunities for people around the world,” said store manager Amy Phillips-Gary.

While there are three shops in Indiana, the Columbus location is the youngest of the four storefronts. In terms of stocking the store, Global Gifts brings in products from artisan groups and vendors verified by the Fair Trade Federation. The artisans are paid upfront at a price far greater than the corresponding local economy’s minimum wage. The negotiations are open, honest, respectful, and dignified.

This, of course, means no sweatshops or child labor.

“I think it’s something, especially here in the United States, [that] maybe we take for granted, and we don’t necessarily think about who’s making the things that we buy and where they come from and the conditions where they work,” said Phillips-Gary.

The phrase “walk our talk” comes up multiple times when Phillips-Gary explains the mission of Global Gifts. A way in which Global Gifts achieves this is by giving customers the opportunity to round up a dollar for organizations such as local soup kitchen South Side Roots (which they did in November) and young adult homeless shelter Star House Columbus (which they are doing this month).

“Our mission is based around fairness and making sure people are treated with dignity and respect, so if there’s an opportunity for us to on a local level or a larger level support that, we definitely will do that,” said Phillips-Gary.

In a report released in early 2020, it showed the revenue of international fair trade products to be just over $7 million in the year Global Gifts opened its doors. In 2018 in which the latest data was made available, that number has increased to almost $12 million, 12 times the 2004 amount.

Even Columbus has seen its own fair trade surge. As of five years ago, Global Galley and Global Gifts were two of the very few fair trade retailers.

“I think that we’ve done a good job with our outreach and education about what fair trade is,” said Head. “I find that there’s more acceptance of it.”

So if you’re searching for a dazzling ornament or one-of-a-kind nativity set this holiday season, you might as well do that shopping while also contributing to the equitable and sustainable movement of fair trade.

Global Gifts is located at 682 N. High St. You can also shop online and get items shipped directly to you at www.globalgiftsft.com.