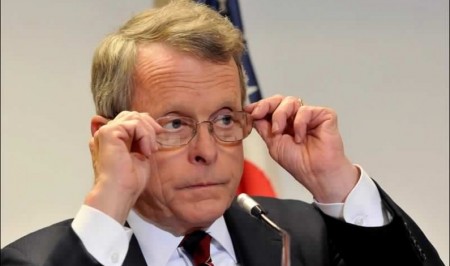 Kayne West wants your vote, Columbus, if he can get it

Thursday evening update: The governor’s office released a statement saying that DeWine’s second, more sensitive PCR, test came back negative, as did tests for Fran DeWine, and the governor’s staffers. He will be tested again Saturday.

When Ohio Gov. Mike DeWine went to greet President Donald Trump upon his arrival in Cleveland, he was administered a COVID-19 test, and the test came back positive.

The test is part of the standard protocol for meeting with the president, and DeWine said he has no obvious symptoms at this time.

“This has been an interesting day for the DeWine family,” said the governor from his Cedarville home, “I feel fine. I have a headache, but I get a lot of headaches, so it’s not that unusual.”

He later told reporters that he does have asthma and takes an inhaler in the morning and at night, but other than that, he doesn’t have any medical conditions that might complicate his recovery.

DeWine and his wife, Fran, who also shows no symptoms associated with coronavirus, headed back to Columbus Thursday afternoon, where they received another test as a follow-up to the first. The results of those tests are as yet unknown. The governor did not have a firm timeline on when he might learn those results.

A small group of people with whom DeWine frequently came into contact will also be tested, especially since DeWine does not know how he contracted the disease.

Of course, they—and the governor—have been observing protocols about mask-wearing and social distancing, and more than a few people online have pointed out the irony of that.

“I’ve already gotten some texts, some not-so-nice texts,” said DeWine frankly. “If that’s what people take from it, it would be very, very sad and that would upset me quite a bit.”

Lt. Gov. John Husted was also given a COVID-19 test today, and his test came back negative, and DeWine said that—that being the case—the operation of Ohio’s government should not be disrupted.

The DeWines will quarantine in Cedarville home for the next 14 days.

Editor’s note: An earlier version of this story was updated with quotes and information from the governor.