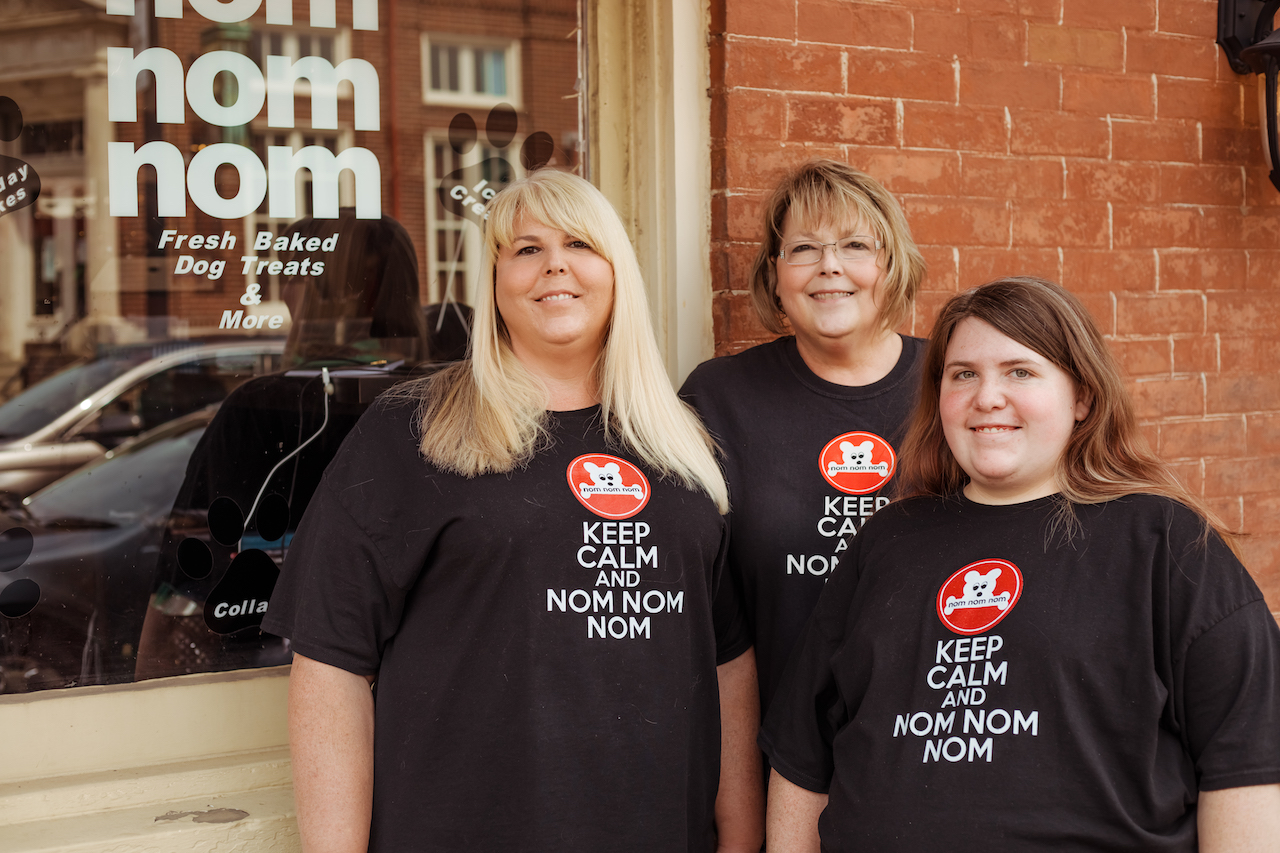 Johnna Kredel and her older sister Barb had a plan.

They would never get married, and instead live with each other for the duration of their lives. Barb would raise dogs, and Johnna would have a doggie bakery.

Barb broke her end of the pact when she got married; but Johnna made good on her promise, opening Nom Nom Nom Dog Treats in 2018 at 3 W. Waterloo St. in Canal Winchester. This summer, she’s opening a second location at 6500 Hayden Run Rd.

Kredel’s mission to offer a plethora of treats for every pooch in the community started with her own extremely picky Black Lab named Herbie.

“If I bought a store-bought treat for him, nine times out of 10, it made him sick,” Kredel said.

Right around 2009, Kredel and her then 10-year-old daughter, Madison, began making their own dog treats for Herbie. Whenever Herbie got a treat, Madison would say “thank you for the nom nom noms.”

“She was always the voice of Herbie,” Kredel said.

When a scare about commercial dog treats saw them pulled off shelves, Kredel’s friends and family began asking her to make dog treats for them as well.

By 2013, Kredel took the necessary steps to begin selling dog treats from her home. She tested her products with the Consumer Protection Laboratory within the Ohio Department of Agriculture and obtained her commercial feed license.

When she took her treats that she and Madison baked to the Canal Winchester farmers market, they sold out immediately. The second week she brought more, with the same result.

“The rest is history,” she said.

Getting her goods into the retail market proved to be a bit more challenging. Commercially sold treats generally require a two-year shelf life, since they typically sit in a warehouse for a year before they’re distributed, Kredel said. Her treats, lacking additives and preservatives, couldn’t meet that requirement.

“We wanted to grow, but we couldn’t grow that way,” she said.

With cookies and cakes on the menu by that time, opening a bakery just made sense.

Since the bakery opened in September of 2018, Kredel has been dedicated to buying locally as much as she can—while bananas and coconut oil can’t be found within our state, she makes sure to buy things like eggs, honey, and peanut butter from local farmers and businesses. That peanut butter, in fact, comes straight from Krema Nut Co.

“The whole vision behind our business is we like to support other small businesses as we operate,” Kredel said. “Everything is local; and it’s not because we’re snooty or anything like that, it’s because we just like supporting local businesses.”

While Kredel purchases from local vendors, she also displays their wares in her store. Visitors will find dog collars, leashes, bandanas, tumblers, mugs, and pens. Between the local ingredient sourcing and the inclusion of local artisans, Nom Nom Nom is a powerhouse for Ohio-made goods.

Nom Nom Nom also donates treats to local shelters and rescues and makes treats a few times a year to raise money to benefit the BrockStrong Foundation, a nonprofit organization created in memory of Brock Johnson, a child in Kredel’s community who died after dealing with an autoimmune disease.

“We’re huge, huge believers that you have to give back,” she said.

While Kredel is dedicated to helping the humans in her community, she’s also very much focused on their dogs—specifically on creating decadent delights for them.

The newest treat is handmade doggie ice cream cones, in which cupcake mix is baked inside a handmade ice cream cone and topped with icing and sprinkles. Kredel said it’s a bestseller.

And there’s even the opportunity to make private appointments for doggies that just want to shop by themselves.

“We want to make sure that we’re very inclusive of all pups,” Kredel said.