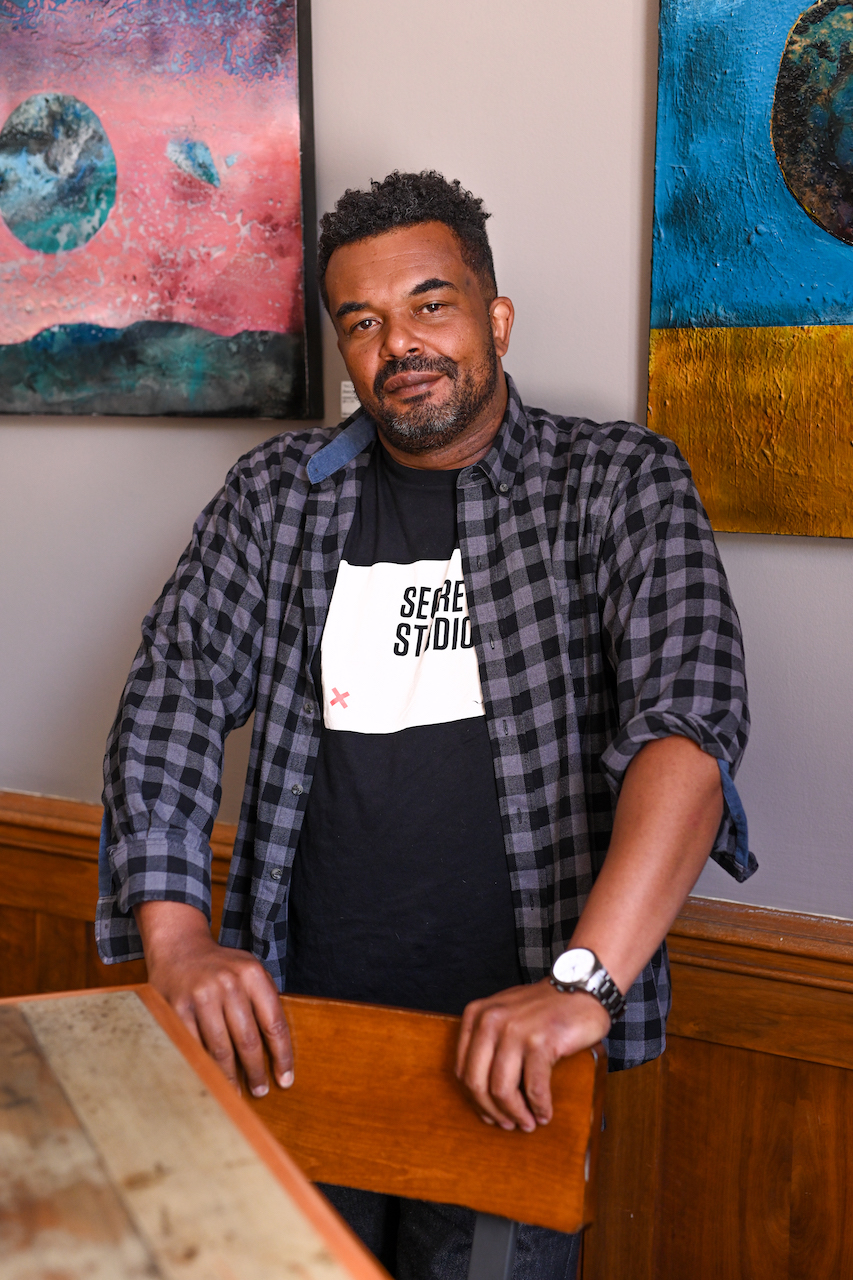 It was an art therapy course that, quite literally, changed the course of Michael Bush’s life. While working to combat emotional stress, he discovered a passion for painting that would turn him into a true artist.

Growing up in Gary, Indiana, Bush would travel to Chicago with his grandmother and mother to the Art Institute of Chicago and art galleries as well as to Cubs games.

“We always made sure to get some culture in,” he recalled.

In school, though, he focused on sports and ROTC. He spent six years in the Army reserves, played basketball at Columbus State, and then settled into a full-time job in the retirement industry.

But he soon found he needed professional help to handle the stress he was experiencing.

“The therapist, at the time, said ‘Let’s try art.’ I had a lot of friends who were artists, and I asked them, ‘What should I do? Where should I go to get supplies?’ I got some watercolors, and it kind of snowballed from there.”

Three years later, while chatting at German Village Coffee Shop, painter and designer Brian Reaume asked Bush if he would like to get a studio at Junctionview Studios.

He eventually embraced the opportunity.

“Now, I joke that German Village Coffee Shop brought me to my path,” he said.

That conversation also opened up connections to many eventual mentors like Laura Alexander, Jay Moffett, and Stephanie Rond. “I like to say that I’m self taught, but I’ve had mentors in probably some of the best artists you can find in Columbus,” Bush said.

“Having a bunch of people around you, pushing themselves, makes you want to push yourself,” he continued. “I was working around people who were in a league well ahead of me when I started out. I learned discipline.”

He discovered his current painting technique through experimentation. Originally, he learned an overspray technique, using spray paint. Then he added water to the canvases. Then he began diluting paints, then adding enamels to break the paint up even more.

“I always look for that magic intersection between color, texture, and fluidity,” he said. His choices of color often reflect an inner attempt to balance his mood.

Outside of painting, Bush has spent over 20 years working in the retirement field.

“My brain gets stuck in the finance side, but I also have this creative side that’s always been there, that was kind of dormant. It’s good to shut down that right brain and do something where there’s no ramifications if something goes wrong.”

In the meantime, he continues to paint nearly every day at his 400 West Rich studio and at home. While he works to control the medium in new ways, he knows that results never will be exactly what he intended. And that’s okay.

“I have to think on my feet and adapt to what happens,” he said. And that gives me a good feeling, in my heart, to say ‘Maybe I didn’t go to art school, but I know that I am an artist.’”