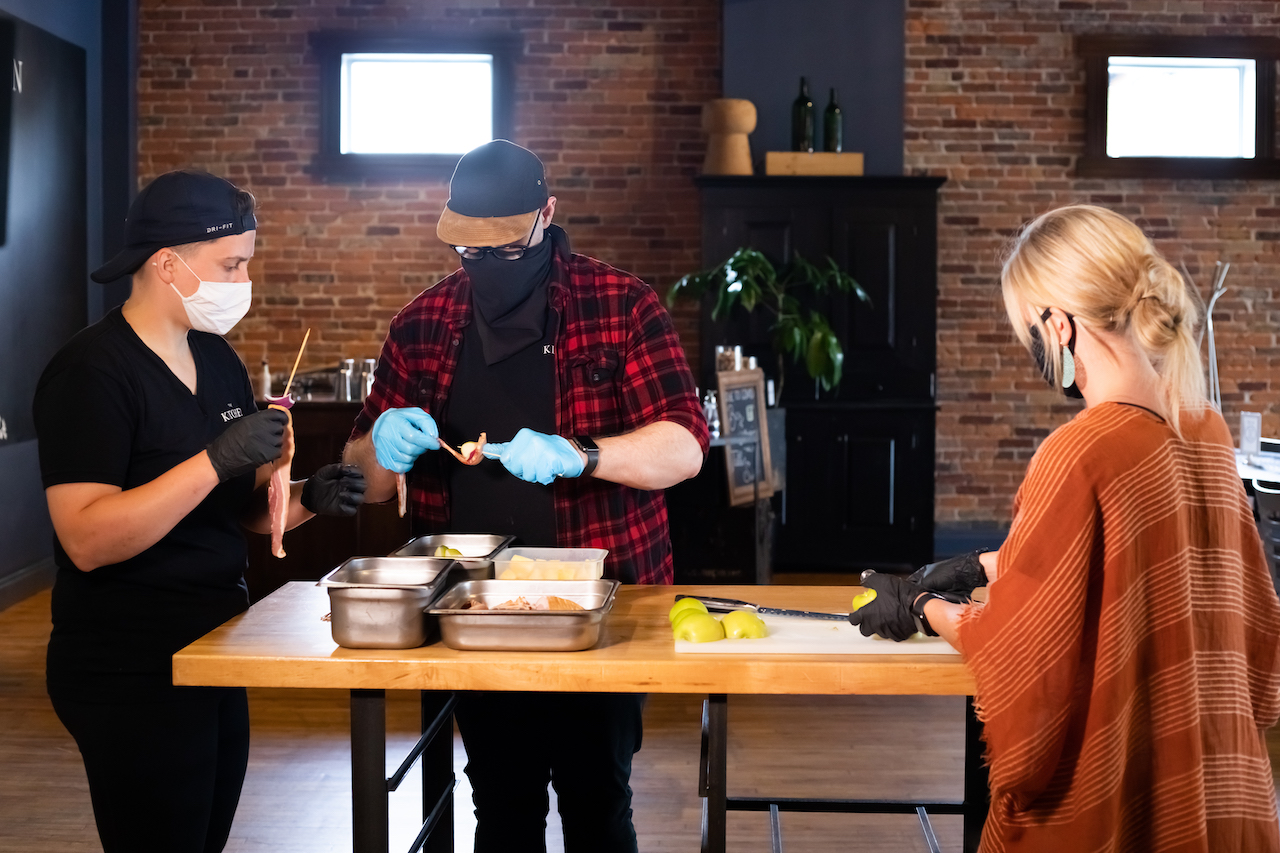 A new bar is coming to Columbus, and it’s entirely alcohol free

You won’t see servers when you dine at The Kitchen, or any chef’s special pasted on the marquee sign. That’s because you, alongside a group of strangers and the friends you come in with, will be the ones doing the cooking.

The Kitchen works by offering what’s referred to by owner Anne Boninsegna as experiential dining, in which patrons prepare their own meal, eat it, and interact freely with each other. This makes the German Village spot one part eatery, one part communal experience, and an entirely unique way to spend an evening.

For Boninsegna and fellow co-owner Jen Lindsey, the concept’s inspiration came from a “cooking camp” the pair attended while they were coworkers in 2009. The camp served as a corporate team-building activity, and paired groups of people together to  learn to cook their own meals on the fly.

Afterward, they both realized the event had imparted far more than just cooking skills: It facilitated powerful peer-to-peer interaction and bonding that couldn’t really be replicated another way.

“People from all over the country came to this event, and they were leaving two days later hugging, after not knowing each other when it started,” Boninsegna said. “I remember seeing one person wish someone else good luck at their wedding, with a knife in one hand and onion in the other.”

So after seeing firsthand the power food holds to bring people together, the pair decided to bring something similar to Columbus.

Today, The Kitchen offers events of all sorts, from private ones for rehearsal dinners, celebrations, and more; to themed, one-off nights that are usually comprised of patrons who are complete strangers beforehand.

They regularly feature a wide variety of themed evenings, from The Smiths, to Bob Marley, to “Eat, Pray, Love,” and even an Oregon-centric wine dinner; but one of the cornerstones is their ever-popular Italian night.

Plus, guests of any cooking skill are welcome. “Even the people who burn water,” Boninsegna said.

And the way things work is pretty simple.

“People come in, they get some basic instruction, and they get to work on what they want to do. It can be hand-rolling fresh pasta, making salad, preparing cocktails. But whatever they end up doing, most people tend to run with it,” Boninsegna said.

And that’s one of the best parts about a night out at The Kitchen: The timing and infrastructure of events are deliberately relaxed. This lets different groups mingle and allows individuals to find the roles that they enjoy most.

And for the most part, Boninsegna said, the guests have an innate ability to self-regulate and lend assistance when it’s needed.

“There will be a team of people working on different courses, and they always help each other out when it’s needed,” she said. “That’s where the collaboration is so beautiful. And then one group might finish the salad they’ve been working on, and everyone cheers together.”

At the end of each evening, Boninsegna and Lindsey witness the same connection they saw at that corporate retreat over a decade ago, and they still can’t get enough of it.

“You hear people start sharing these parts of their lives they never would have otherwise, with people who they didn’t know a few hours ago. They’ll exchange phone numbers, and they’ll talk about the kind of cheese their grandma loved to eat when they were little,” Boninsegna said.

In fact, she believes that events like the ones The Kitchen provides—deceptively simple in how they work—are strangely very difficult to find anywhere else, and as important as they’ve ever been.

“You know, kids can go up to one another on the playground and ask to be friends. As an adult, you can’t walk up to people at dinner and say, ‘That salmon looks great; let’s be friends,’” Boninsegna said. “But we’ve had groups come back and tell us they’ve been best friends since they met here five years ago. And that’s what we set out to do.”