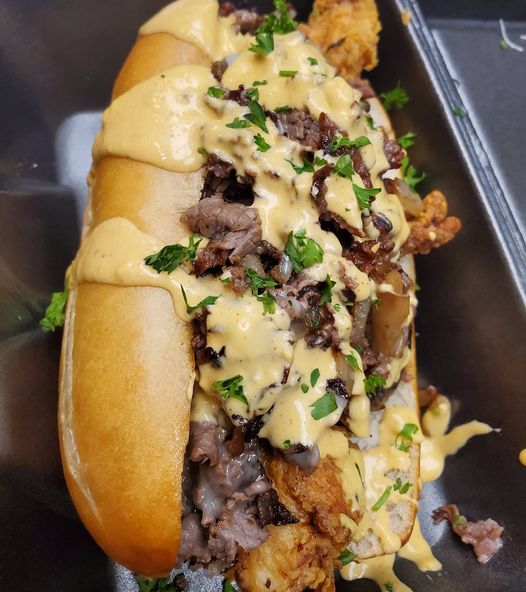 Business has been booming at Black Box Fix ever since they officially opened June 1 in Easton.

“It’s been great. The first two weeks were swamped; the lines were out the door,” said owner and head chef Eric Rogers. “The feedback has been excellent, and people are loving the food.”

The restaurant, which operates a trio of locations in northeast Ohio (they first opened in Cleveland in 2014), announced its expansion to central Ohio last fall, after leasing the former location of Zest Juice Co, located at 4037 Fenlon St.

According to Rogers, the Easton spot’s popularity has become apparent on the brand’s social media accounts.

“Since we’ve been open in Columbus, we’ve gained probably five or six thousand Instagram followers,” Rogers said. “There’s definitely a buzz. A lot more people are posting and reposting our food, and it’s coming from Easton.”

Known for their wild takes on Cajun and comfort food classics, Black Box Fix is the brainchild of chef Eric Rogers, who appeared on an episode of the Food Network show Guy’s Grocery Games after opening Nevaeh Cafe & Catering in Cleveland in 2012.

Black Box Fix is known for cooking up inventive, indulgent riffs on old favorites, such as the OMG Philly—a cheesesteak that comes in several different versions that feature everything from creole shrimp to fried lobster—as well as their Stoner Fries, which top a bed of fresh, hot fries with grilled shrimp, mushrooms, onions, peppers, scallions, and Cajun cheese sauce.

The eatery also regularly offers one-off specials at their Easton location that don’t make the menu, such as Cajun Shrimp Stoner Fries, which were available earlier this week. Make sure to check in with their Instagram account for updates on specials.

Rogers noted that—like many restaurants—Black Box Fix has been challenged by a staffing shortage, meaning they’ve been operating under limited hours (2-8 p.m. daily). But they’re hoping to change that soon.

“Today we’re having a hiring day, so we’re confident we’ll be able to overcome this obstacle too,” he said.

If you like this, read: Have a bit of burlesque with your brunch at this Easton eatery