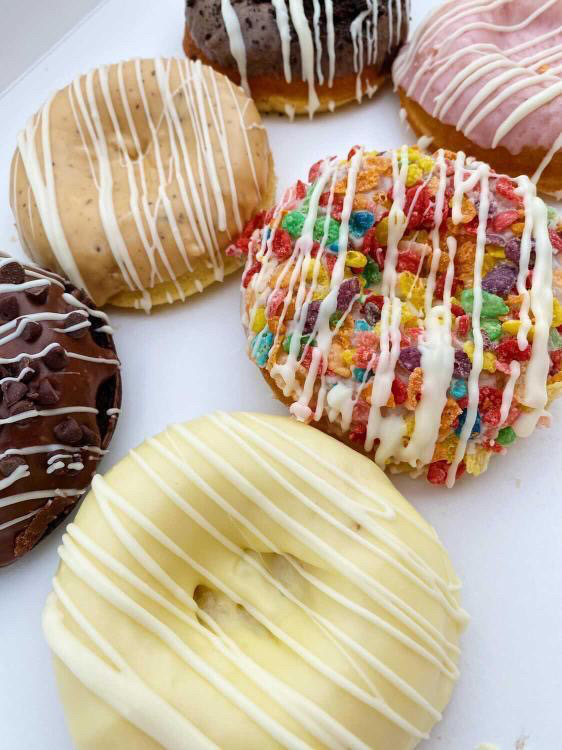 Photo courtesy of The Mochi Shop

You’ve likely had the pleasure of trying many different donut varieties, from the common raised yeast and the traditional cake donut to rich, old-fashioned sour cream varieties, and even the long john, stuffed with any number of sweet, satisfying fillings.

Something you mostly likely haven’t tried yet, though, is a mochi donut. Mochi, the gelatinous, rice-based delicacy native to Japan, has been a popular treat in the U.S. for years now, found in everything from bubble tea to ice cream.

Still, we have The Mochi Shop to thank for bringing the mochi donut trend to Columbus.

The two-person team of Kaori Becker and Junna Kanazawa launched the operation from their own houses in the spring of 2020. A friend, Nadia Swenson, also assists with glazing the donuts. As Ohio’s Cottage Law allows for home bakeries, the two decided to make the best of all the free time on their hands they had due to COVID-19.

Being passionate about baking and mochi helps as well. Becker is a professional home cook, a mochi cooking instructor, and even had a cookbook, “Mochi Magic,” being published this past fall.

“Actually in the Bay Area [where Becker is from] and Hawaii, they’re pretty popular. A lot of people are including mochi into baked goods using mochi flour, and mochi donuts are the most popular one,” Becker said. “We wanted to share Mochi donuts with Columbus, and our own Japanese culture,” she said.

The duo doesn’t know of any other mochi donuts being offered in Columbus, which means if you want to try these sweet treats (and believe me, you do), The Mochi Shop is where you’ll want to go.

According to Becker and Kanazawa, their mochi donuts are created using a cake donut recipe that substitutes sticky rice flour for traditional flour.

“It gives the donuts a really nice chewy texture, like mochi,” said Kanazawa. Their mochi donuts are also gluten free, because they feature rice flour.

The Mochi Shop keeps a full slate of fun, creative, and obviously delicious varieties in rotation at all times.

“We wanted to include Japanese flavors like matcha, houjicha [roasted matcha], and earl grey tea with honey and yuzu,” Becker said. “But we also wanted to have some fun American flavors too, like strawberry, chocolate, Fruity Pebbles, and cookies and cream. We usually have about five to six different donuts every week.”

The pair offers both delivery and pickup options (at Global Gallery Coffee Shop, 3535 N. High St.) though their website on a biweekly basis. Keep an eye out for The Mochi Shop at local farmers markets as well.

As the fledgling business grows, Kanazawa and Becker have their eyes on expansion.

“Right now, it’s just the two of us; we’re both moms, and our kids play together while we bake. But this has been really exciting. We’re building up our kind of platform and our following so that once we open a shop, we can have regular customers who appreciate what we’re doing,” Kanazawa said. “We’re also saving up money to be able to open a shop in the future. If everything goes well, we can probably have one in Columbus in 2022.”