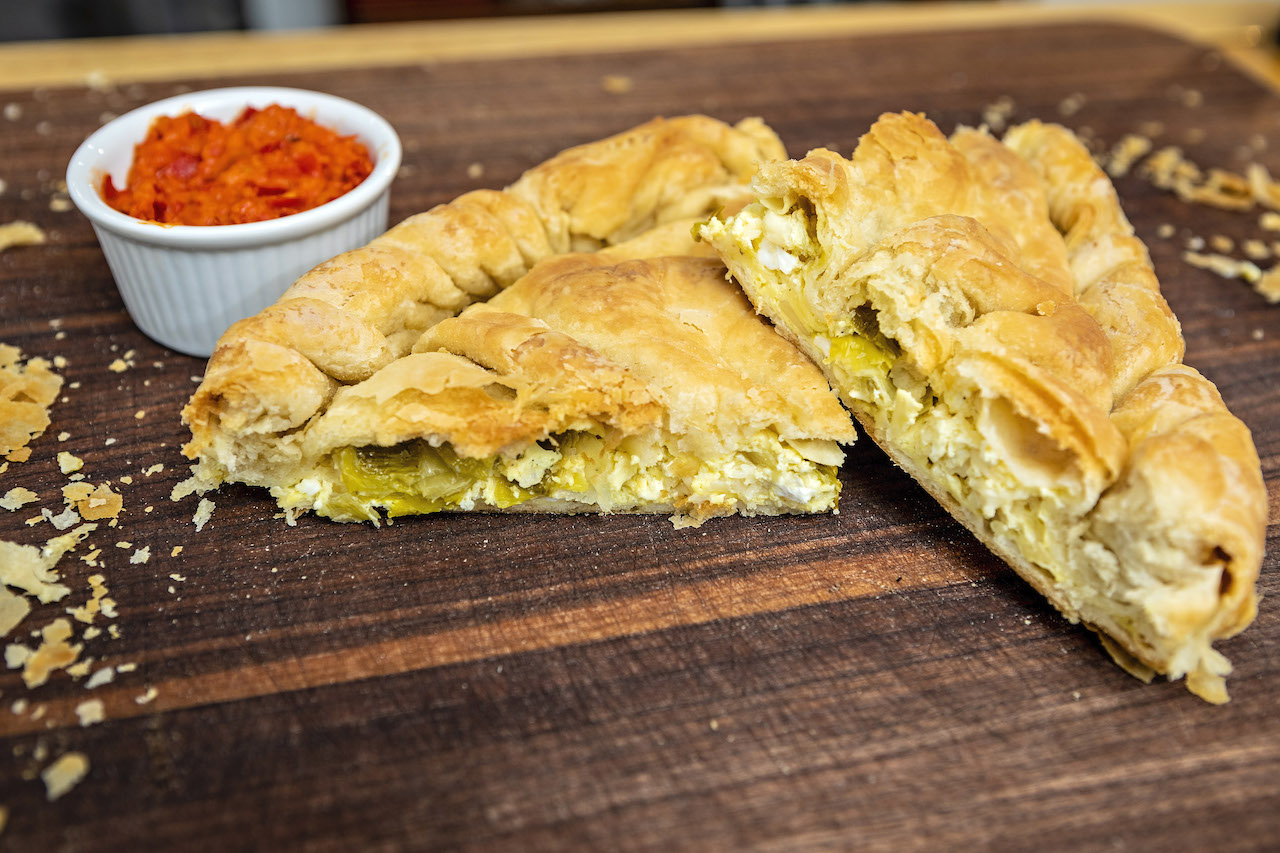 Chances are, you don’t know what zelnik is. Most people don’t.

But this savory Macedonian pastry is making its way into the (614) thanks to a new Columbus eatery named after the dish—and it’s this delightful mesh of cheese and phyllo dough that gave the owner a sense of identity as a child.

“Zelnik was always my favorite food growing up, and it was always fun for me to share that with my friends,” said Zelnik founder Ryan Miller of his delivery-only operation. Orders for the dish are taken through Instagram DM at @zelnik614 and are due the day before deliveries, which are currently Tuesday and Friday by Miller himself.

“When I was a kid, nobody else ever really knew what it was, but this always gave me a little bit of an identity that’s different from everyone else,” he said. “So I’ve always kind of liked it for that purpose, in addition to what it does for my taste buds.”

Traditionally made of egg, soft Bulagarian cheeses, and sautéed leek stuffed into a rich, flaky crust, Zelnik takes a hot second to make. Which is probably why, as far as Miller knows, there aren’t any other Columbus spots slinging his Eastern European pastry. And if they are, perhaps not with as much love and history as Miller.

In his food blog, “Dining with DiMiller,” Miller wrote about how his children’s ethnic identities will be even more diverse than that of he and his wife, who have heritages composed of many countries.

“In time what is left of those ethnic identities? What part of each distinct culture is passed on? What is forgotten? Things that we can be sure will carry on—culinary traditions, heirloom ingredients, cooking methods, recipes. All things food,” MIller wrote.

True to his blog, the recipe for zelnik was passed down from Miller’s great-grandmother, (“Baba”) on his mother’s side (the Macedonian side of his family), even if it took an unusual path through his family tree to him.

Neither his grandmother nor his mother learned how to make zelnik; in fact, Miller’s father—who isn’t Macedonian at all—was the one who took the time to annotate the recipe. And not without a little trouble.

“My great-grandmother never used traditional measuring devices, so [Miller’s father] had to jot down and approximate things. But that’s how a lot of old world cooks are; they just kind of eyeball things. My Dad would stop her, grab the mug she was using to portion ingredients, and measure how much it held. And that’s how we have the recipe now.”

And as Miller worked to perfect the zelnik recipe for commercial sale over the last year, he also incorporated his own set of tweaks and polishes.

“It’s traditionally made in this big sheet, but not everybody’s going to buy a big sheet of something they don’t know,” he said. “ So I shrunk it down to an 8-by-8 square and kind of experimented with the ingredient amounts to get everything right.”

In addition to these mainstays, Zelnik seasonally cooks up some inventive variations that are far from traditional, but most definitely still delicious. These include a recent pork and sauerkraut pastry for New Year’s Eve and a variant with smoked turkey offered around Thanksgiving. What’s more, Miller—an avid fan of Mexican food—plans to experiment with a Zelnik highlighted by Mexican flavors in the near future.

Every Zelnik is paired with a unique and delicious complimentary sauce. Miller’s permanent menu items come with the sharp, fruity, and subtly spicy ajvar. A relish made from roasted ajvarski pepper (native to Macedonia) and eggplant combined with vinegar, oil, and a robust blend of spices, Ajvar’s kick of bright acidity is a perfect compliment for a rich and hearty zelnik.

“A lot goes into Ajvar, and it’s a delicacy; it’s known as the vegan caviar of Eastern Europe,” Miller said.

Previous pastry pairings have included a homemade gravy for the smoked turkey pastry, and a créme fraîche and mustard sauce for the pork and sauerkraut pastry.

While Zelnik has received serious local interest after its late October launch this year, the Ohio University grad and former engineer is taking a measured approach.

“I don’t ever think this will be an on-demand kind of thing,” he said. “It takes a lot of time to make, and they’re traditionally prepared for special occasions, for holidays.”

But that doesn’t mean Zelink isn’t on a path to bigger and better things. As Miller plans his next move—be it a permanent spot, a cloud kitchen, or a shared location—it’s clear he’s doing what moves him, and sharing a huge part of himself along the way.

“I have hopes that someday Zelnik will not only be something that foodies seek out, but be a household name for everyone,” Miller said. “I’m excited to continue challenging myself to come up with fun, unique combinations that people love.”

Learn more about Zelnik at instagram.com/zelnik614

New Gahanna beermaker has a lot of heart