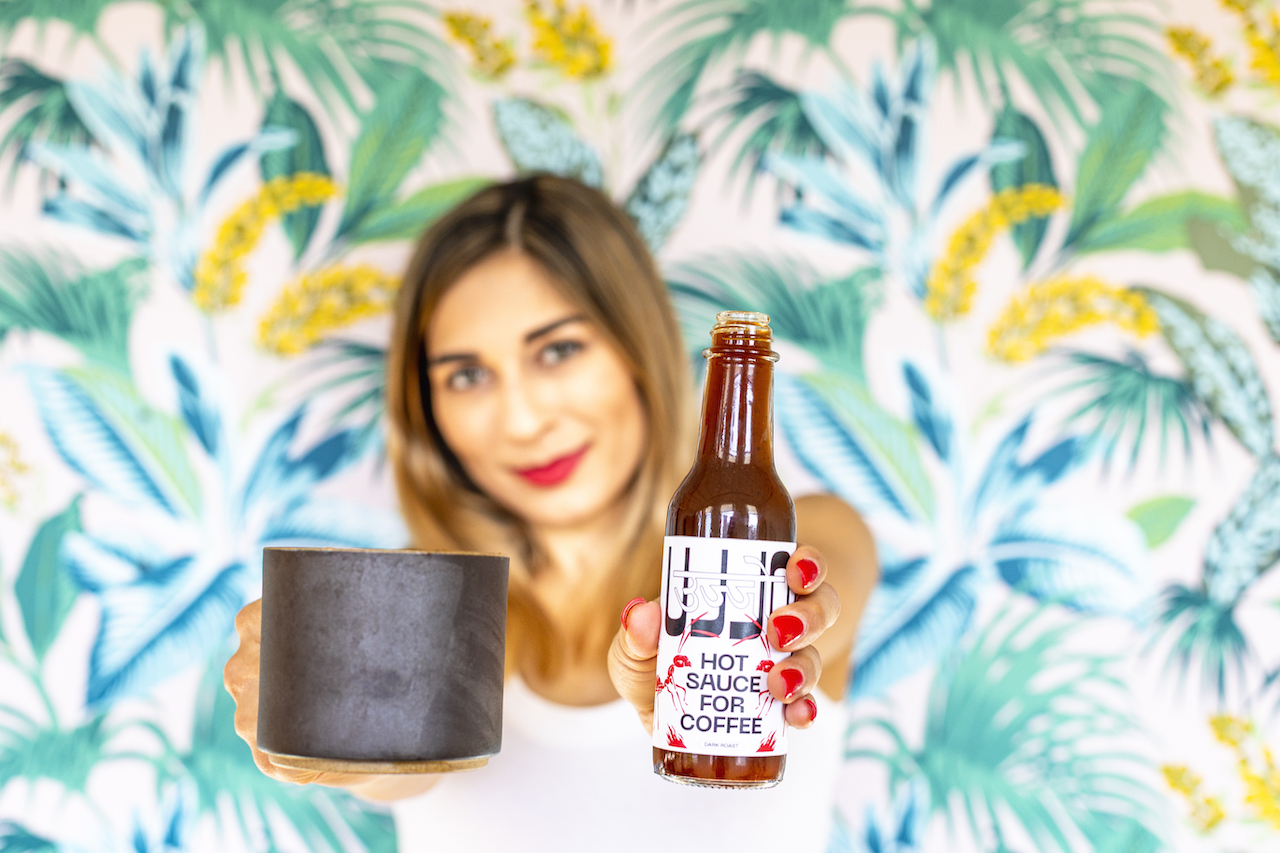 The bottle of Frank’s RedHot Sauce sat on Lauren D’Souza’s kitchen table like a loaded gun.

It wasn’t a question of if D’Souza—a pioneer of spicy food and adventurous eating— was going to use it in her coffee, but when.

“I was just goofing off with a friend and he said, you know, you like coffee, you like spice, you should try them together. I did, and it was terrible,” D’Souza said with a laugh.

But like penicillin or LSD, this weird one-off incident actually uncovered something much larger and more important.

“After I tried it, I realized it was the salt and the garlic powder and the vinegar that made it so bad,” D’Souza said. “The heat it added to my coffee was actually really enjoyable.”

Named after the word “fire” in Konkani, Ujjo is—according to D’Souza’s extensive market research—the very first commercial hot sauce for coffee. You read that right: Ujjo isn’t made from coffee, it’s made for coffee—to go right in your morning cup of joe.

On the surface, it’s not difficult to imagine spicy coffee or its appeal, with similar products like chili tinctures on the rise. Where things got complicated for D’Souza, though, was exactly how to make coffee spicy in an appealing way.

“If you want to create a shelf-stable hot sauce, there are only a couple of ways that you can infuse heat,” D’Souza said. “Vinegar, salt, sugar, and oil are the most popular.”

While salt, vinegar, and oil each could preserve the product’s heat and flavor, they did so in a way that was less than appetizing. So after meticulous experimentation and product-testing, D’Souza settled on a sweet sauce.

And when you take your first sip of Ujjo-infused coffee, it’s this sweetness you’re likely to notice right away. Warm baking spices help to round out its flavor, and earthy Pasilla chilies (a less common variety that meshes better with the profile of most coffee beans) imparts the distinctive kick of Ujjo.

“The idea is you’ve got something that’s very balanced in its heat,” D’Souza said. “It’s not going to build up over time; you’re just going to get a little prick of sensation as you’re drinking.”

Ujjo will initially be offered in two different blends geared toward coffee (one for light roasts, the other for dark), but according to D’Souza, the new sauce is a great way to add a fiery kick to more than just your morning Java. It works well in other beverages like tea, hot chocolate, and even cocktails, in addition to foods such as pumpkin pie, waffles, vanilla ice cream, and much more.

“Made for coffee, great on everything—that’s the informal slogan we’ve kind of adopted,” D’Souza said.

The product is set to launch any day now and if you want to be first in line, simply go to the website and sign up for first dibs at ujjo.com.

As the formal launch of Ujjo unfurls, it might be easy to lose perspective. But for D’Souza, something that keeps her grounded is also one of the reasons she launched the product in the first place: her father.

Ujjo is named after the word for fire in his native language, but it’s a different kind of flame—one totally outside of the culinary world—that D’Souza hopes will continue burning with Ujjo.

“Growing up—whether he was couch-surfing through Portugal on his own, or ordering the weirdest thing on the menu at the restaurant—he was always finding ways to just do something a little bit different,” she said of her father, noting he uses Ujjo in black tea every morning. “Really, he’s the person who introduced me to spice, not just in terms of food, but living your life in a spicy way. That’s what we’re trying to do, and we hope others will too.”

To learn more and sign up to be the first to try Ujjo, head to their website at ujjo.com.