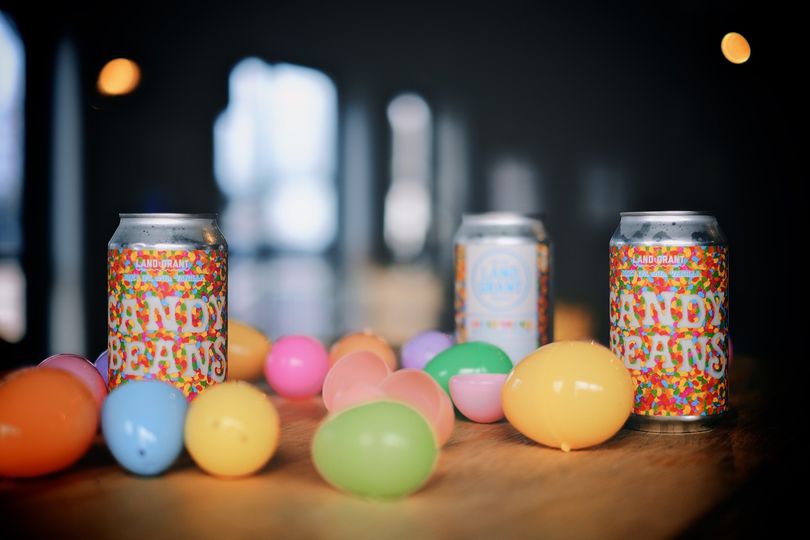 While a beer-flavored jelly bean is nobody’s idea of an Easter treat, a jelly-bean flavored beer is something we can get behind.

And even if you’re on the fence at first, just hear us out.

“We thought about how we could brew something that tastes like a handful of jelly beans,” said Land-Grant Director of Communications Meredith Miles.

This juicy, tropical IPA relies on a carefully-selected blend of seven different hops (chosen by head brewer Dan Schaffer) that each express their own unique fruit-forward notes.

“We’ve only ever brewed one or two other beers with seven different hops in it,” said Miles, noting that this abundance of different hop flavor is what gives this beer its unique character. “What’s cool about using so many is that you get all of these different flavors that pop out while you’re drinking.“

Good thing they left out the liquorice, though.

And the finishing touch for Candy Beans (its name is also a nod to an iconic Arrested Development joke) is a pinch of Madagascar Vanilla. While you might not immediately associate this with jelly bean flavors, according to Miles, it’s a subtle addition that might not be detectable on its own, but helps tie all the beer’s other flavors together nicely.

“The addition of vanilla gives those hops a tiny bit of sweetness and creates a candy-like impression,” she said.

The beer clocks in at 7.3% ABV, and manages to keep its bitterness level (relative to the style), down to only 33 IBUs, another tweak that helps it pull off its absolute best jelly bean impression.

And if you want to get your hands on Candy Beans, don’t wait around. This is the first time the beer has been brewed and, according to Miles, it may be the last, since Land-Grant is always churning out something new.