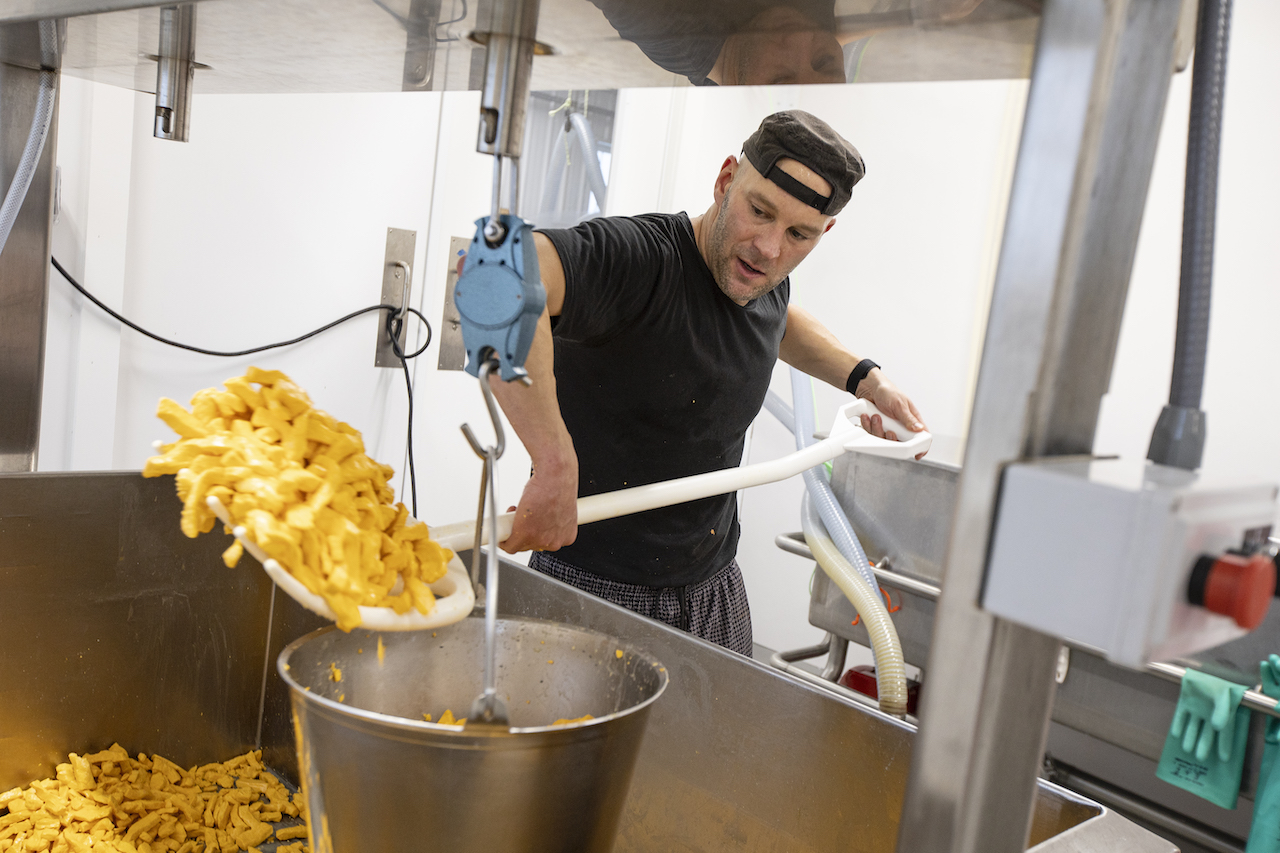 Paint It Black: Would you dine in the dark?

Buckeyes are a powerhouse in the cheesemaking world

As we walk across one of the sweeping pasture that makes up Stonewall Dairy in Cambridge, the ground frozen on a chilly mid-January morning, fifth-generation farmer Louie Cattlet and I navigate a path through his herd of nearly 40 cattle.

The cows have just been milked and now they’re hungry, but they’re still cautious enough about me, a newcomer, to not approach right away.

And then I feel it: Warm, wet, and surprisingly abrasive on the back of my coat. I turn around to find a particularly large (and curious) brown Holstein less than a foot from my face. And even though by now she’s lost the element of surprise, she keeps licking, leaving a massive, sticky trail across my sleeve.

“That’s Monster; that’s her name. My Dad started calling her that because she’s so big, and it just kind of stuck. But she’s also super friendly; she’s always getting into everyone’s business,” said Catlett (a vegetarian himself), who can recall the names and personality quirks of each one of his 40 animals without hesitation.

Monster and the rest of the cows are given space to roam, fresh spring water, and even a barn to sleep in on the coldest nights. Life for a cow doesn’t get much better than Stonewall Dairy.

The farm has been in Catlett’s family for five generations now, although his father only made the switch to dairy farming in the 90s. And he’s hoping to keep it in the family for at least a generation longer. Helping Louie milk with a confidence and poise that belies her age is his daughter, Luci, 10. She even finds time to bottle-feed a calf born only four days before my visit.

“She’s grown up around this and knows how to do everything; it’s just second nature to her at this point,” he said.

All of the milk Catlett’s produces here goes to one cheesemaker: Black Radish Creamery. And Stonewall is the only milk the cheesemaker uses. This is a unique setup, but Louie wouldn’t have it any other way. Fluctuating milk prices drove him in and out of dairy farming before, but now John and Anne Reese of Black Radish pay him a flat rate. The setup affords Catlett stability and provides the Reeses with a consistent, stellar milk source.

“Artisan cheese is the only way to do things right now. And I think it’s the future for dairy farmers,” Catlett said. “You see, a lot of people try to make as much milk as they can, and it really just drives prices down. Why not make less of something and let it become more valuable?”

But there are still other ways to make a living as a dairy farmer in Ohio. As the state has over 1,700 dairy farms but only 31 cow milk cheesemakers, the majority of milk goes to a handful of large-scale producers. One of these, Pearl Valley Cheese in Coshocton, turns out 20,000 pounds of cheese daily from roughly 250,000 pounds of milk.

One of Pearl Valley’s many milk suppliers is Lee Kohler of Marodore Farm in Baltimore, Ohio. Kohler, who grew up on a dairy farm, has been at Marodore now for nearly 40 years. He’s now in the process of handing the operation down to his son, Jeremy. The Kohlers milk Guernseys, which produce a coveted milk that’s high in protein and butterfat, something they receive a premium for.

The biggest cheesemakers in Ohio, though, are the state’s swiss producers. The state is responsible for 61% of U.S. Swiss. Brewster Cheese, located in Stark County, is the largest producer of Swiss cheese in the country, drawing milk from 400 different farms.

According to Tracy Enslen, vice president of business development at the American Dairy Association Mideast, even though some of these farms turn out—quite literally—tons of cheese each day, all of the large Ohio cheese producers are still family owned.

“There’s no such thing as industrial in Ohio cheese,” she said. “The artisanal pride and the quality is all still there even in the largest of them.”

The Buckeye State is home to more than just cheese produced from cow milk. There are several dedicated goat milk cheesemakers, such as Mackenzie Creamery in Hiram and Osage Lane Creamery in Pataskala.

Ohio is even home to a sheep milk creamery, Kokoborrego Cheese Company. This Mount Gilead business has been making sheep cheese since 2011, and their award-winning Owl Creek Tomme is a must try.

Here in the (614), we’re lucky enough to be situated near outstanding creameries like Blue Jacket Dairy (Bellafontaine) and Osage Lane Creamery (Pataskala).

In fact, cheese is even being crafted in Columbus proper. While Black Radish Creamery technically makes and ages their products in nearby Alexandria, they’ve operated a North Market food stand since 2016 (with a second location in North Market Bridge Park), offering not only their own cheeses, but also an eclectic spread from Ohio and beyond.

According to John Reese, who owns Black Radish with his wife Anne, while the pair have always considered themselves lifelong foodies, it wasn’t until John started working for a cheesemaker fresh out of culinary school that things really fell into place.

“It involved science, it involved food; it had that physical component I need to stay focused, so at the end of the day it just encompassed everything, and I fell in love instantly,” Reese said.

Twice a week—using as much as 4,000 pounds of milk delivered by Catlett—Reese will make cheese. The style depends on the qualities and content of the milk, which varies daily. Turning out roughly 30,000 pounds of cheese a year, Black Radish makes everything from cheddar, to the aromatic raclette, to a new washed-rind cheese called Pious Eddy that features bready notes, a creamy texture, and a light funk.

But no matter what he’s making on a given day, Reese is grateful to be paired with Stonewall, and  to be in the Buckeye state making cheese.

“The important thing for me is that we’re respecting the ingredients. We’ve been exposed to artisan cheesemakers for a decade now, and I really think that our milk source is one of the best that I’ve ever seen,” he said. “I’m proud of what we’re doing, and I’m proud that it’s happening here in Ohio.”