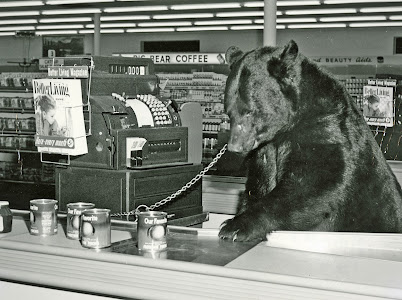 John M. Clark is a Columbus historian and author. Every month, he recalls a fascinating and under-appreciated moment in Columbus history for a (614) Magazine column called “Columbus Uncovered.”

But back in the 1930s, Big Bear grocery founder Wayne Brown found a unique way to pack the customers in – by bringing along actual, live bears.

On February 15th, 1934 – during the Great Depression, nonetheless – the Coalton, Ohio, native opened his first grocery in a cavernous building that had previously housed a skating rink, a dance hall and horse shows.  364 Lane Avenue was a great location – across the street from The Ohio State University – perfect for walk-in traffic.

On Opening Day, tens of thousands came out to see the new store and the Big Bear bear.  And over the next eight years, no one entered Brown’s revolutionary, new, self-service supermarket without catching a glimpse of it – inside a special cage, just outside the main entrance.

Caretaking duties fell to the store’s janitor.  An urban legend at the time claimed that any stock boy who made a mistake on the job had to lead the bear down to the Olentangy River and bathe it.  By about 1942, the original Big Bear bear had outgrown his cage and was given a new home at the Columbus Zoo.

But other bears followed, if only for grand openings, helping the supermarket chain grow to almost 90 stores throughout the Midwest.  Crowds would gather in parking lots to watch a bear walk a modified “high wire.”  Children lined up to ride a bear.  On opening day of one particular Big Bear grocery, cameras flashed as a bear appeared to ring up sales at a cash register.

But Wayne Brown was much more than a creative marketer.  He was also a business innovator.  By focusing on volume purchases and relying on thin margins, the Big Bear chain consistently beat other stores’ prices.  Competitors saw this coming from the opening of the very first Big Bear store and threatened their suppliers that they would pull their business if the suppliers sold to the Columbus chain.  Big Bear found other, smaller distributors, but the strike lasted five years.

Ironically, the success of the Big Bear business model eventually played a role in its demise.  Other, larger, grocery chains began springing up, putting enormous pressure on Big Bear to sell at even lower prices.  Penn Traffic, a giant supermarket holding company, forced a buyout of the weakened company in 1989.

The writing was on the wall; and the stores closed for good in 2004, leaving many fond memories of a once-thriving, locally grown supermarket chain and the real, live bears that helped make it successful.