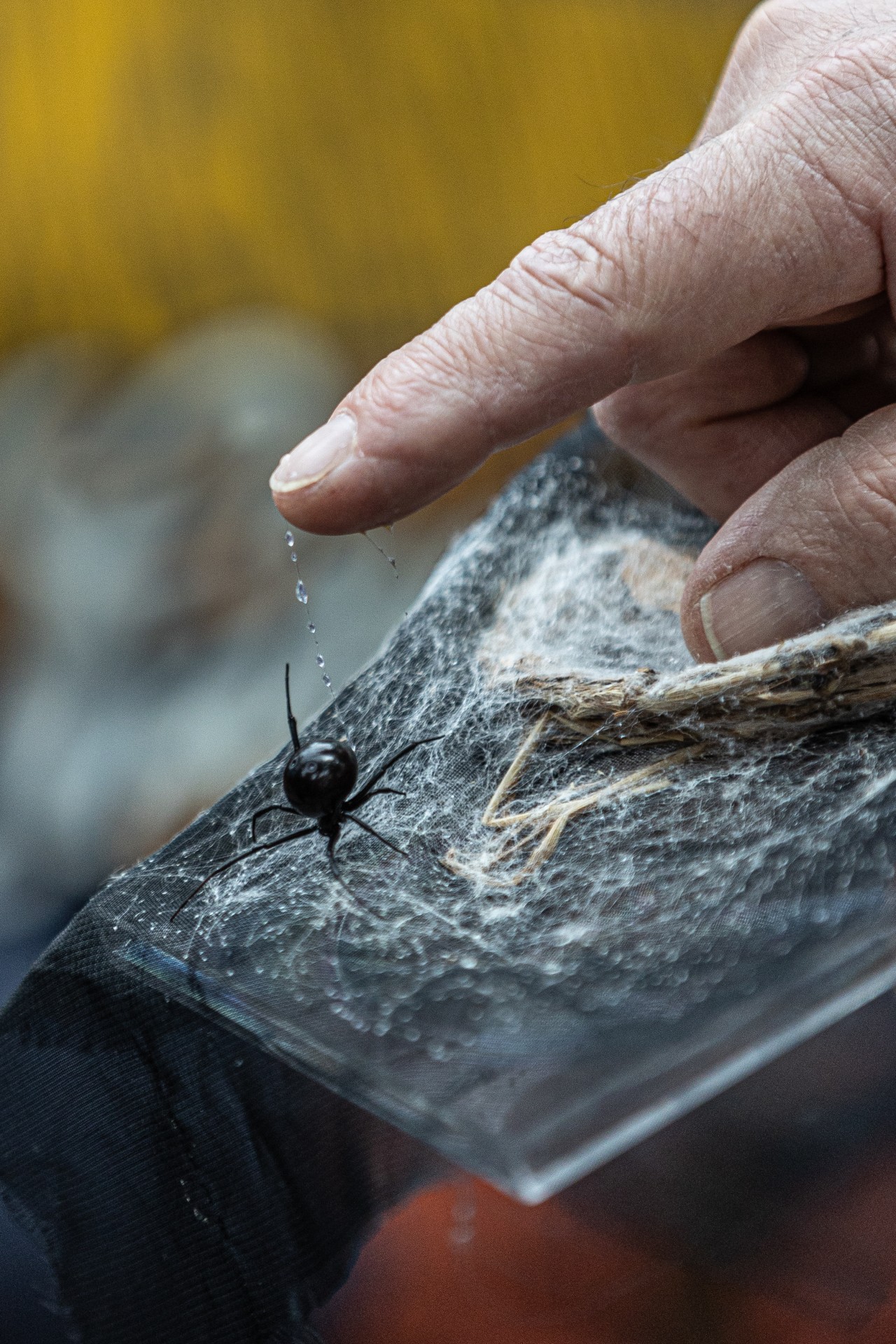 Ever poked a black widow spider in her abdomen?

Mark Berman has. What’s more, he regularly waits around for what happens next.

The practice is Berman’s favorite demonstration he does as part of his Bug Man Education and Science Shows, and—spoiler alert—the spider doesn’t bite.

“Spiders bite to eat, and we’re not food,” said Berman.

Since she needs enzymes in her saliva to digest her food, a black widow isn’t about to waste her precious spit on us annoying humans. Instead, she tries to get rid of us the best way she knows how: With her web.

And so each time Berman does this demonstration, spectators can see strands of web connecting his finger to the spider’s abdomen.

“She’s beautiful and elegant, and not dangerous,” Berman said.

A naturalist, Berman has been studying bugs for over 50 years. The founder of BUGMAN Educational Entoprises (get it?) shares his passion all over Ohio and even beyond, bringing his demonstrations and videos to schools, libraries, zoos, festivals, and more.

Berman’s interest in bugs began at five years old when, growing up on the East Side of Columbus, he would investigate the pond and fields nearby. While studying entomology at the University of Hawaii, Burman began volunteering to visit schools around the island and share what he knew with the students. That’s how he got his nickname.

“Kids would drag their parents over and say, ‘hey, it’s Bug Man,’” he said.

The moniker stuck and gave way to a fledgling business.

Berman began his business in earnest when he attended grad school in Massachusetts in 1996, but eventually dropped out of school to return to Columbus and pursue Bug Man Education full time.

“This was always kind of home,” he said.

Through a post-degree education program at The Ohio State University, Berman earned his Ohio Teaching Certification for high school biology and general science.

Though Berman pursued science academically, he always had a love for photography and videography. He’s been behind a camera since he was just 13 years old.

Now, Berman has parlayed his passion into his business.

His YouTube channel boasts a treasure trove of insect videos, from cicadas to beetles to katydids. There’s also the odd squirrel or two. One of his favorite videos he’s made, Berman said, is of a dung beetle rolling a ball of bear poop.

Berman shows his videos to his audiences, and he also sometimes performs demonstrations. It’s common for him to work with scorpions, tarantulas, and mealworms—the bugs he features are generally safe to handle or be present in public. And after seeing his demonstrations, audiences of all ages think a bit differently about bugs.

Though Berman often works with kids, his audience is just as likely to include adults. Regardless of their age, everyone in the crowd is likely learning something incredibly interesting.

“You see them processing stuff; you just see them putting things together,” he said.

A pillar of Berman’s shows is the concept of respect. The word comes from the Latin, “spectare,” which means “to look.” At its core, the word means “to look again”.

For Berman, bugs are a gateway into showing others just how amazing the world really is.

If you look long enough, “there’s almost always something cool,” he said.