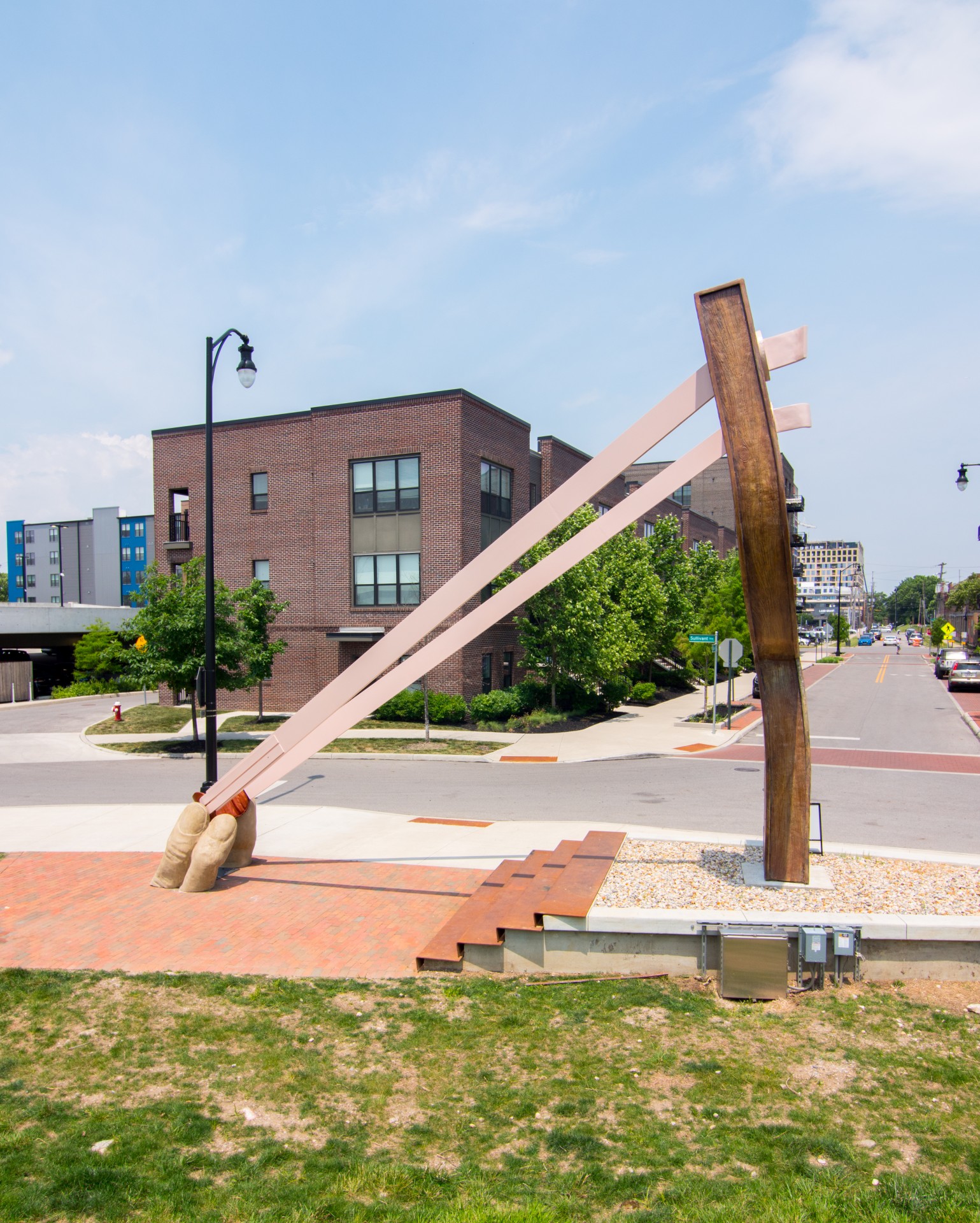 For Andrew Lundberg, the cherry on top of the five-month construction of an interactive sculpture came when he was able to confirm his design was indeed intuitive.

During the grand unveiling of his “slingshot” sculpture May 13 at Casto’s River & Rich apartments, spectators walked right up to the art piece and began taking photos of themselves.

“It was really great to see people just immediately start interacting with it and having fun with it,” Lundberg said.

The slingshot concept was one of seven ideas Lundberg put forth to Casto, who funded the project. Though the interactive element was the reason the company favored the idea, for Lundberg, the concept has even greater significance.

At over 6,000 pounds, the slingshot symbolizes the mischievous nature of an artist. It’s also a visual reminder of Franklinton’s momentum as a community.

Lundberg said the location for such a large sculpture made sense, because of the large number of makers and artists who have put Franklinton on the map as Columbus’ arts district.

Though this was Lundberg’s first interactive sculpture, he’s made a name for himself working with companies such as Casto to design original art creations, signage, custom furniture, and sculpture. Lundberg Industrial Arts, which he founded about 11 years ago, is located within the Columbus Idea Foundry.

Lundberg had previously worked with Casto to create the large, 25-foot vertical sign at the River & Rich complex. The company reached back out to him to come up with another concept for an art piece there.

The slingshot was a winner for a couple of reasons. To begin with, taking something simple and blowing it up is always a solid idea.

And the fact that people could stop and take photos with the sculpture and interact with it meant that viewers could in their way become a part of the piece.

“Then it turns into a little bit of you,” Lundberg said.

Design for the project began last June, and close to 20 people assisted with the project. Lundberg worked with a core group of five individuals for the actual construction of the sculpture, which took five months.

Made of a steel interior and sculpted exterior, the slingshot itself is about 20 feet high and sits atop a five-foot pedestal. Large concrete fingers hold the slingshot back, and visitors are able to put their legs over the slingshot’s straps and pretend that they’re about to be launched skywards.

“You really become a part of it,” Lundberg said. “That’s the beauty of it.”