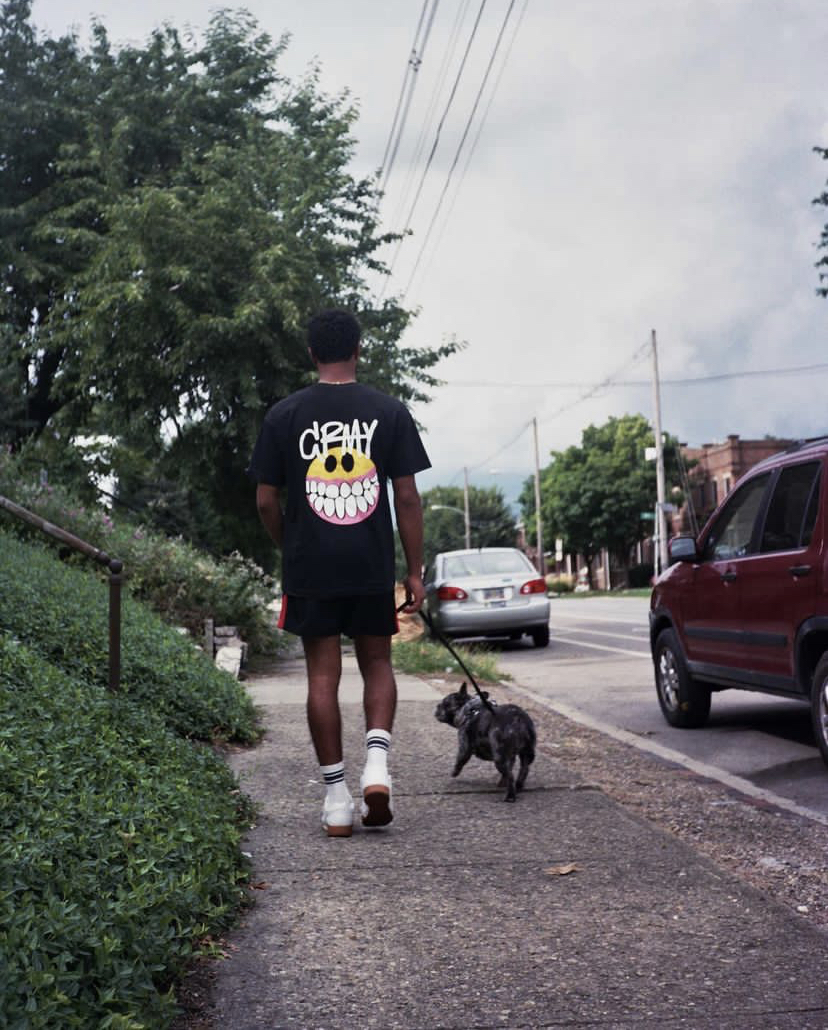 “I had a gut feeling Columbus was the move for us,” said Stephen Barrett.

“There’s just great energy here,” added Peter Barrett, his younger brother. “People are trying to get out and create and share ideas.”

The Cincinnati-born pair moved to central Ohio last year and are co-founders of Creamy Studios, an online artisanal streetwear brand.

They hand-produce one-of-one clothing items out of upcycled materials from local thrift stores and vintage resellers. T-shirts, sweatshirts, and shorts are inventory mainstays, but accessories such as hats and enamel pins also frequently appear in Creamy collections.

Growing up with a graphic designer dad and a thrift shopping-obsessed mom, the Barrett boys developed a passion for both art and fashion at a young age. They spent their childhood weekdays taking “every art class possible.” On the weekends, they’d travel to various second-hand stores searching for a perfectly curated wardrobe.

Their desire to work for themselves led the brothers to start the Creamy Studios brand—which they did out of their Ohio University dorm rooms back in 2018.

And if you’re wondering about the unusual name, wonder no more. It’s a product of many things.

“In the streetwear space, the word ‘creamy’ is an updated synonym for ‘groovy.’ It stands for anything you like or think is cool,” Stephen explained. “I’m also a big peanut butter addict, so it’s a little ode to that as well.”

Peter chimed in with another reason the brand name stuck: It’s edgy. Some people love it; for others, it can be cringeworthy. But the boys like that it’s a bit provocative.

“If nothing else, it’s certainly memorable—which is exactly what we want,” Stephen said.

And this all-in creative approach is very much reflected in the final product.

Take a quick scroll through the studio’s website or Instagram and you’ll immediately notice that the brothers’ style is—in Stephen’s words—“really dense.” From bold colors to action-oriented illustrations to pop-art-esque graphics, there is a lot happening on any given Creamy t-shirt.

But again, this is intentional.

“The original thought behind the brand was to make pieces for artists to perform in,” said Peter. “We want to ensure our stuff is unique and stands out in a crowd or on camera.”

The pair typically puts out around 10 collections per year, each varying in size.

Some are smaller and centered around a specific event or holiday; a drop like this may only feature five original pieces. But others are major seasonal efforts, for which Stephen and Peter may produce up to 80 unique items. Their upcoming “Gas & Go” drop, inspired by NASCAR racing culture, is one such collection.

But no matter the size, production remains intense and time consuming.

“We’ll pick a drop date and work backward from there,” Stephen said. “Sketching concepts, collecting materials, prepping them for paint, executing the design, heat pressing so the clothes are machine washable, shipping, and finally, promotion. It’s always a lot.”

And while the brothers have been doing this type of hard work for more than four years, Creamy Studios has grown significantly since their move to Columbus last summer.

Here they’ve found—and helped cultivate—a community of like-minded artists that support and inspire each others’ work.

“When we first moved up here, we took the approach of being as humble and friendly as possible to grow our network,” Peter recalled.

The pair hosted house shows featuring small bands and local artists. They went to flea markets. They reached out to fellow creatives on social media. Their goal was not only to make new friends, but to also bring people together around a common creative interest.

And they did just that. Columbus now represents their most significant supporter area, surpassing their hometown of Cincinnati.

But Creamy is not an Ohio-only operation. Stephen and Peter ship their clothing to customers all around the world. China, the United Kingdom, and Australia are some favorite destinations to date.

That said, there is certainly no rich-and-famous requirement for Creamy customers.

“We sell to people of all ages and walks of life,” said Stephen. “The only truly defining characteristic of our supporters is that they’re folks who tend to have an elevated appreciation for art.”

It’s that very same emphasis on art that will continue to guide the brothers’ next moves.

They’d eventually like to open up a hybrid retail-studio space where customers can both shop items and watch them being made. They’d also like to produce fine art pieces alongside clothing.