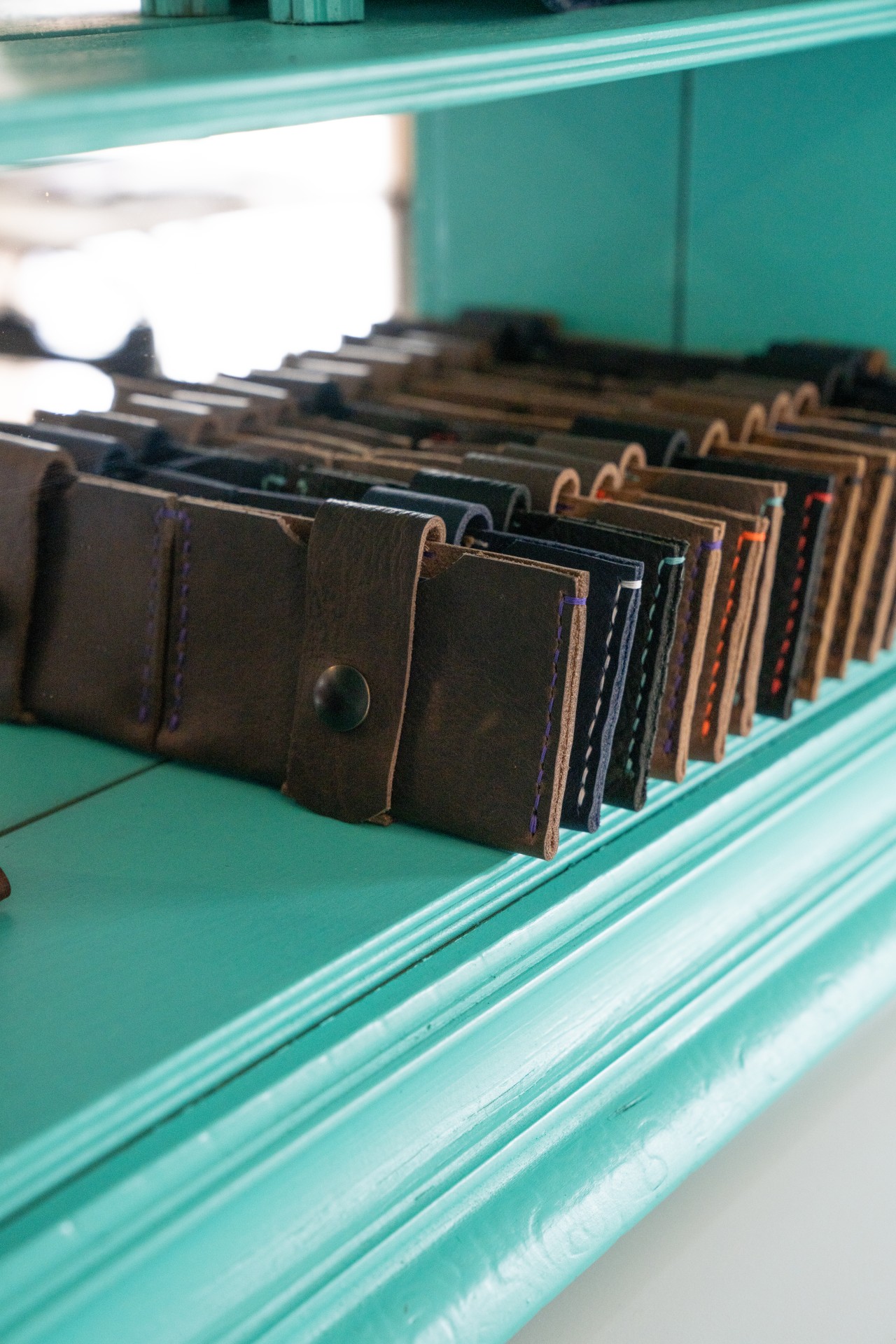 The feedback Brandon Ault received for his very first handmade wallet wasn’t exactly positive. In fact, it was peppered with expletives.

To put that into context, the first thing you should know is that Ault was on a boat at the time, working as engineer and first mate. The second thing you should know is that Ault’s boss, the captain, wasn’t thrilled that one of his sailors was learning how to work leather while on the job. Ault had figured he would eventually get caught and decided to try to soften the blow with a gift for the captain.

“This isn’t a craft show,” the captain said to Ault—along with other choice words.

Though Ault is now a considerable ways from the water, the name of the leatherworking business he owns and manages along with his partner, Becca Lynn, pays homage to his old life. Old Salt Leatherworks was founded in 2008; this past November, Ault and Lynn officially opened a small retail outlet for their products inside their home at 267 Kelton Ave.

Their products are simple with a focus on function and durability.

The Old Salt Shophouse is on the first floor of the home and functions as a small retail hub as well as a means to view the studio space beyond. Hours are 11 a.m. to 5 p.m. Wednesday through Saturday, and noon to 4 p.m. Sunday. Goods are also available for purchase online. In the future, the Shophouse could hold more than leather goods: Lynn said she’d like to eventually feature rotations of other local makers in the Old Town East area.

“Once we really understand what the shop will look like when the [Trolley District’s] East Market is open, we want to start featuring some of our other creative friends,” Lynn said. “We are so lucky to know so many talented people, and we very much want to be an anchor for local makers in our community.”

Lynn and Ault also own the lot behind their home, and she said they dream of building a tiny home on it that could perhaps double as an artist’s studio or retreat. The space could even be connected to the main house.

While Lynn was introduced to leatherworking after she began seeing Ault six years ago, she had been a painter and artist in her own right. She started helping Ault run shows. Now, she’s an equal part of the business, handling the website and stitching many of Ault’s designs.

Ault had worked in 400 West Rich before, and then later out of his home. As the service jobs he and Lynn depended on for extra cash began drying up in 2020 with the onslaught of the pandemic, the couple decided to double down on their business with a retail component to take advantage of the foot traffic expected from opening of the Trolley District development nearby.

Though the brick and mortar location is newly opened, Old Salt Leatherworks is already popular with those in the know. Ault calls his Front Pocket Wallet the unofficial wallet of Old Town East.  The number of people the couple spots wearing their goods has been growing.

Ault and Lynn make purses, totes, pouches, and more for retail, and they also do custom orders.

The couple crafts the goods they sell from durable, oil-tanned leather sourced from Tandy Leather on Morse Road. All items are made with one or two pieces, and hand sewn. Design is informed by the grain of the leather as well as its flaws.

“We don’t shy away from the imperfections,” Ault said. “It’s good to look your wallet in the eye every once in a while.”