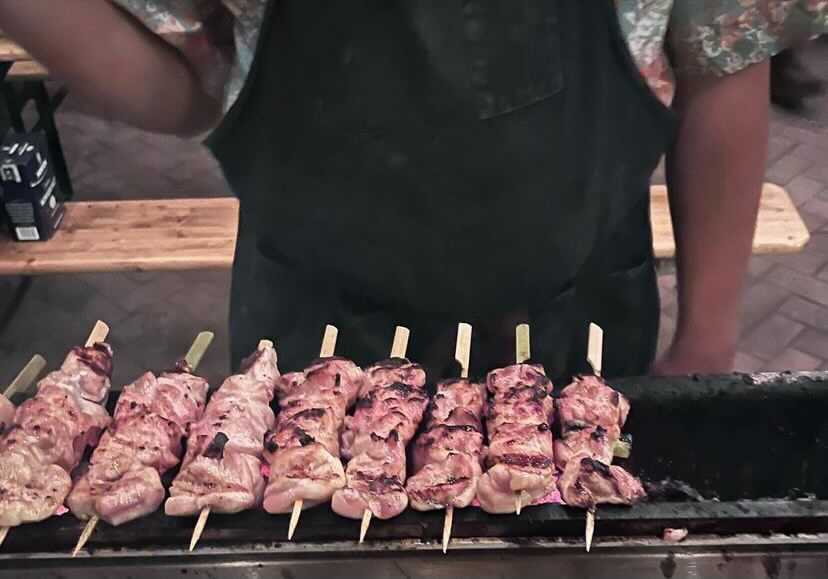 If you’re a fan of Preston’s: A Burger Joint, the recently-closed Cleaver, or East Market’s Koso, you’ll probably want to give the Bincho Boys pop-up a try.

With a name using the shorthand word for binchotan (which translates to “charcoal” in Japanese, and refers to a specific type of open-flame grilling), The Bincho Boys are something like a Columbus chef supergroup in pop-up form. The concept consists of Matt Heagen (Preston’s), Jay Kleven (Cleaver) and Raymond Kim (Koso), three friends with their own separate culinary endeavors who decided to launch Bincho Boys as a fun way to cook together while offering the city a unique new cuisine.

“We also identified a lack of variety in the late night food scene in Columbus, ever since Kenny [Kim] and Misako [Ohba] left, and wanted to play with a concept that would help fill that void,” Kim said.

The pop-up, which first started in October at a Heer to Serve fundraising event, serves a variety of small plates, headlined by skewers prepared on a yakitori grill. While Bincho Boys will always offer traditional yakitori skewers with black garlic tare (served with a variety of proteins), Kim said that Bincho Boys aims to continue developing its offerings as well.

One thing that won’t change, however, is the first-hand closeness that diners experience with food from The Bincho Boys, as they’re able to watch as it’s prepared before them on an open charcoal grill.

“So much of the experience is derived from seeing the food being cooked on live fire,” Kim said.

As a pop-up, Bincho Boys likely won’t adopt regular hours or a brick and mortar anytime soon. Kim said the concept, for now at least, is more of a fun side project among friends, but there will still be plenty of chances to grab a skewer or two in the near future.

Next up for The Bincho Boys is a pop-up at The Oracle on Saturday evening. Kim said the group will hold semi-regular events, but a formal schedule hasn’t been created yet. Follow their Instagram account to stay up to date.

The concept was also featured on a recent episode of Spoon Mob, a local food-based podcast.