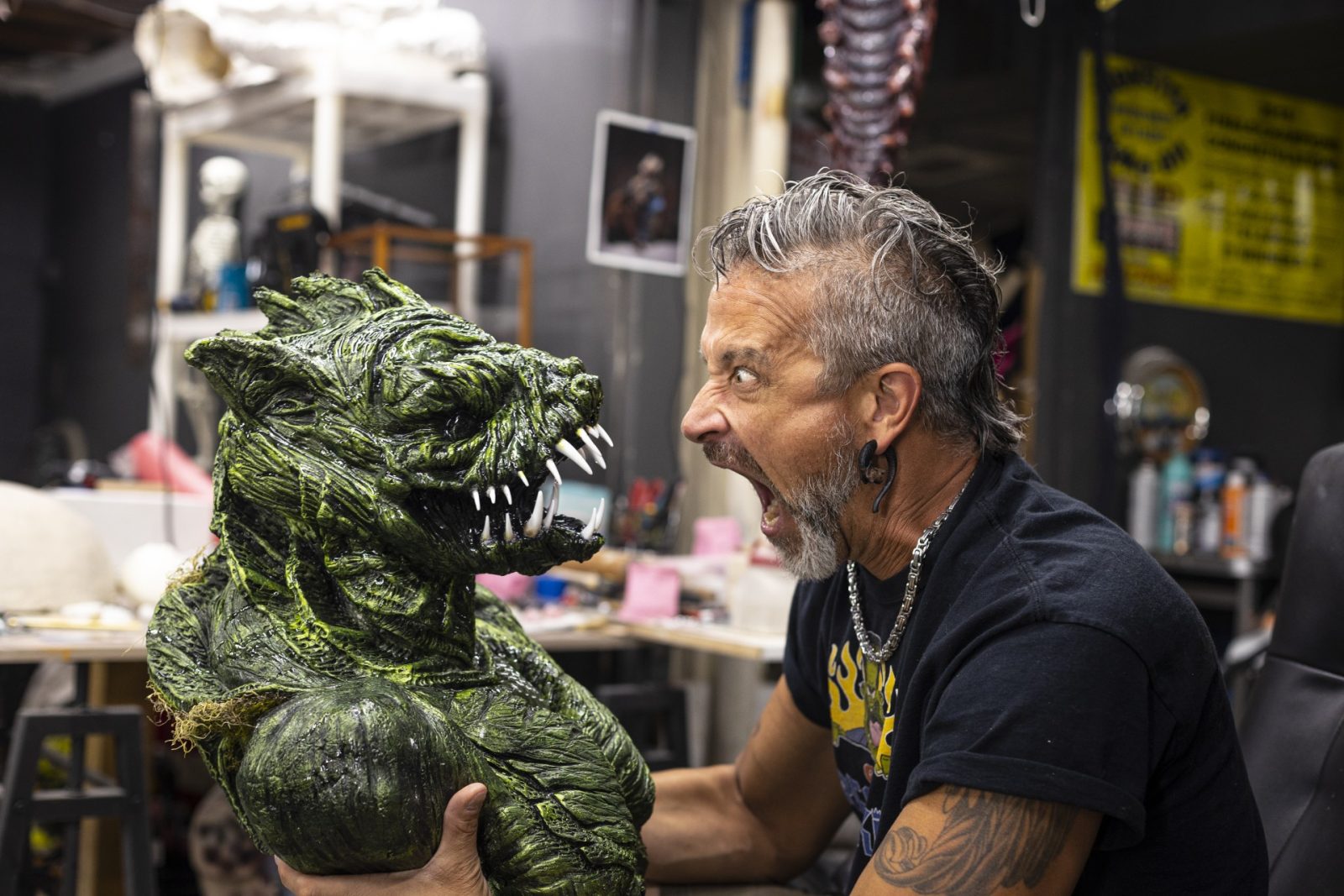 Todd Reed knows his monsters. In fact, he knows them so well, he’s probably dreamt up a few that visit us in our nightmares and pop up around Halloween.

Reed is an artist and a part of the upcoming TV show “614 Scream Kings,” where he and three other visual artists visit cities across the country that house mythical monsters, dig around to try to find said creatures, and return to Columbus to build replicas in their studio. The first episode they filmed, not yet released, was an investigation into the elusive Moth Man in Point Pleasant, West Virginia. Reed had attempted to play a prank on his videographer.

“We were cutting through these dark dirt back roads and it was pitch black, so I all of a sudden turned on ‘The Shining’ soundtrack and rolled down all the windows,” he said. “It was just to scare him. And then out of nowhere I looked behind us and saw these two lights, like glowing eyeballs. One minute we were alone and the next there was this thing behind us—we hauled it out of there!”

Was it the Moth Man? We’ll never know, but it seems like it was a close call either way.

Beyond the show currently underway, Reed has dabbled in a wide range of projects under his company Steampowered SFX Productions, from independent films, to music videos, to commissioned sculptures. He was integral in the opening of Otherworld, the immersive art experience that opened in 2019. His special effects makeup has been seen in artist Bobaflex’s music video “I Am A Nightmare.”

“I did makeup on this huge bodybuilder guy who was made of solid muscle,” Reed said. “I mean I’m tall, and even I looked like a little kid standing next to him. But it turned out really good—I like a bigger canvas.”

Speaking of bigger canvas, you can’t get much larger than Cedar Point. Reed is responsible for redesigning the amusement park’s flagship gift shop for their Halloweekends, a job he says is a labor of love because he’s such an Ohio kid. His handmade monster called the Rougarou (a monster from Cajun folklore that has the body of a man and the head of a wolf) stands in front of the roller coaster of the same name.

Reed is the first to admit that, growing up, he was scared of everything.

“I’d leap up to get into my bed every night because I was afraid there was something underneath it,” he said, laughing. “I was one of the most scared kids on the planet.”

Even so, Reed was drawn to the special effects in creature films.

“Just the magic of being able to do something like that was crazy to me,” he said. “I always felt like they were the unsung heroes of the movies.”

As a kid, he always had a Super 8 camera on him, spending hours making stop-motion claymation movies. Although Reed couldn’t go to a coveted expensive film school or enroll in courses, his mom was as supportive as she could be.

“We didn’t have a lot of money and she was a single mom, but one day she came home with some modeling clay, a couple rolls of film and a bunch of ‘Starlog’ magazines,” Reed says. “She even found a book to teach me to do everything. That was her way of supporting me.”

While it was always a dream, Reed didn’t pursue special effects and filmmaking until a few years ago.

“One day I just decided I was going to go after my childhood dream and do something I’ve never gotten to do before,” he said. “So I got into it, and it brought so much joy to my life.”

Reed admitted that though there are amazing opportunities for special effects artists and filmmakers in California, he wants to cultivate the talent here in Columbus. While local filmmakers don’t have a Hollywood budget, Reed goes above and beyond to make sure every project he’s part of has the best effects it can.

“Anytime I do smaller stuff, I ask them, ‘Will you just trust me on this?’ And they let me take the reins and give them really cool stuff,” Reed said. “I give them more bang for their buck and press the limitations.”

For years, Reed held special effects classes at CCAD Community Education and enjoyed the teaching process, but now he wants to offer courses for free. So he’s looking for a local vacant building to teach, build a haunted attraction, and install his props workshop.

“We could get Columbus filmmakers in there so they can use the areas of the haunt as a sound stage,” Reed said. “They could come to the props workshop for everything they need and have this one-stop shop available to them.”

His talents take him all over the country, but Reed’s heart and efforts reside right here at home. He’s been invited to countless career days for charter schools and done presentations for the Boy Scouts and Girl Scouts. Even during the busiest of weeks, he loves to give demonstrations about special effects art and see kids faces light up.

“I want to do something for the kids in Columbus who were like me,” he said. “Who loved filmmaking and wanted to learn but didn’t have a lot of resources.”

The plans for this new location for special effects filmmaking and classes is TBD, but we have no doubt that Reed will make it happen. If the man can build a drooling, hairy, dagger-tooth monster from his imagination, we’re pretty sure he can do anything he sets his mind to.