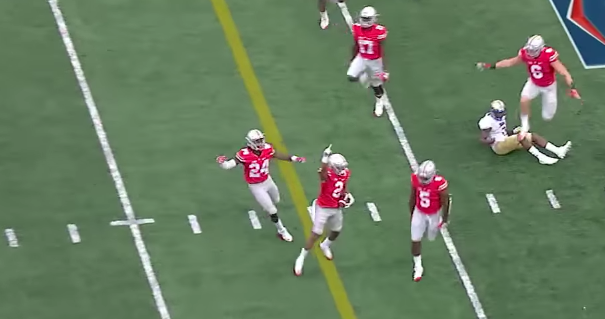 Little Girl to Get 780k After Police Shoot Her

The boys in scarlet were set to wow everyone after a record breaking pre-season opener against Bowling Green, but instead played a sloppy first half.

While the offense struggled against’s Tulsa, our defense stepped up to the plate making sure that despite a weakened offense, we stopped any tempo Tulsa tried to gain.

The Buckeyes intercepted four, count’em, FOUR from Tulsa’s QB Dane Evans, including two pick-sixes close to the end of the first half.

Barrett was unexceptional this game (we’ll let things slide after his astonishing performance last game) ending the first half with a 14/22 & 149 yards. Looks like after throwing six touchdowns last game, his arm needed a rest.

Despite Tulsa’s strong defense, especially against Barrett — their offense failed to capitalize on their strengths, resulting in only putting up 3 pts. via a 37-yard field goal.

The half ended with OSU up with 19-3. Their defense carrying both touchdowns.

The rain fell, delaying the start of the second quarter but once things got back on track The Buckeyes were reinvigorated, closing out the game with 417 yards, beating Tulsa 48-3.

Their next scheduled game takes The Buckeyes to Boomer Sooner country where they go up against No. 14 Oklahoma Sooners. Its looking to be the first real test of this season’s Buckeyes.