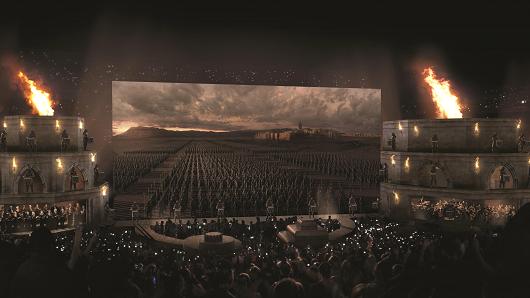 “Music is Coming.” Winter is also coming, but riding the winds of winter will be Game of Thrones: Live Concert Experience.

If you’ve ever wanted to experience the heart-pounding, blood-curdling intense soundtrack from the critically acclaimed and popular HBO show, Game of Thrones, now it’s your chance.

Series composer, Ramin Djawadi, is joining forces with Live Nation to put on a series of concerts around the nation. Fans will hum along to their favorite tunes, like, “Main Title” and “The Rains of Castamere.”

Part of the show will be a state-of-the-art technology, bringing footage from the show to play alongside the live music. a 360-degree stage, LED screens and maybe even holographic dragons, who knows, because this already sounds incredible. One of the stops on the 28 city tour will Columbus, Ohio, at Nationwide Arena on Feb. 22nd 2017.

This is especially awesome, considering season seven won’t start until July of 2017…and there are only two more seasons why did they do this why why why, I just want to see what happens it’s tearing me apart.

Anyway, tickets are on sale — Don’t miss out on what will probably be a ridiculous, dragon filled time complete with loud orchestral music and probably video of fictional people getting slain by frost monsters. #countmein

If you haven’t watched Game of Thrones, click here to shame yourself.