FREE: Bug your bike to blow off burglars

Local schools are in a state of chaos right now. Seventeen schools are closed today due to violent threats. Threats have been directed at Columbus City Schools but they’re handling the situation with more police officers. Similar situations went down at Fairfield plus some added issues.

Check out details below:

Licking Heights Central Middle School is closed today due to a verbal threat of violence from a student. The student has been taken into custody. –10TV

Lancaster High School is closed on Friday after a student received a threatening message from an unknown caller. All other Lancaster city schools will be open with ramped up law enforcement. –10TV

All seven schools in the Logan-Hocking School District are closed today after a threat was made to “LHS.” Administrators decided to keep all students at home because the threat as so vague. This is after the District went on lockdown on Wednesday for an “emergency situation.” –10TV

All five Lakewood Local School District schools are closed on Friday as a precautionary measure after an investigation involving a school shooting threat by three students took place on Thursday. The students have reportedly been arrested. –10TV

The Graham School will be closed on Friday due to a undisclosed threat at the school. –10TV 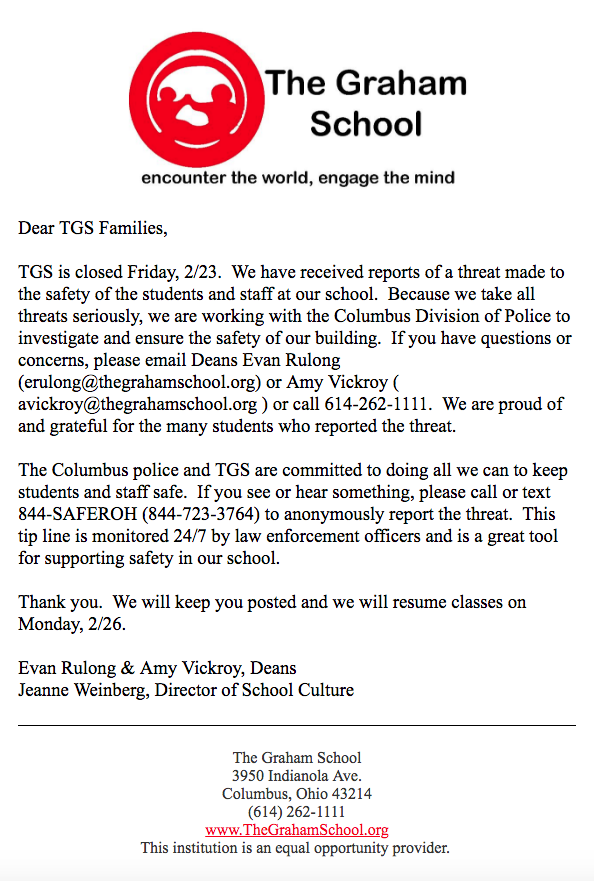 Two Fairfield Union elementary schools are closed today while the high school and middle school are locked down due to a fugitive on the loose. –10TV

On Wednesday, a Fairfield student was under investigation after a threat was rumored. There was another anonymous threat posted to a fake Facebook account. The school requested additional deputies at the school on Thursday. –Lancaster-Eagle Gazette

Columbus City Schools are open today despite several threats made on social media. There is a greater police presence and the CPD has deployed additional resources to “protect, and ensure the safety of the students of the Columbus School District.” –10TV