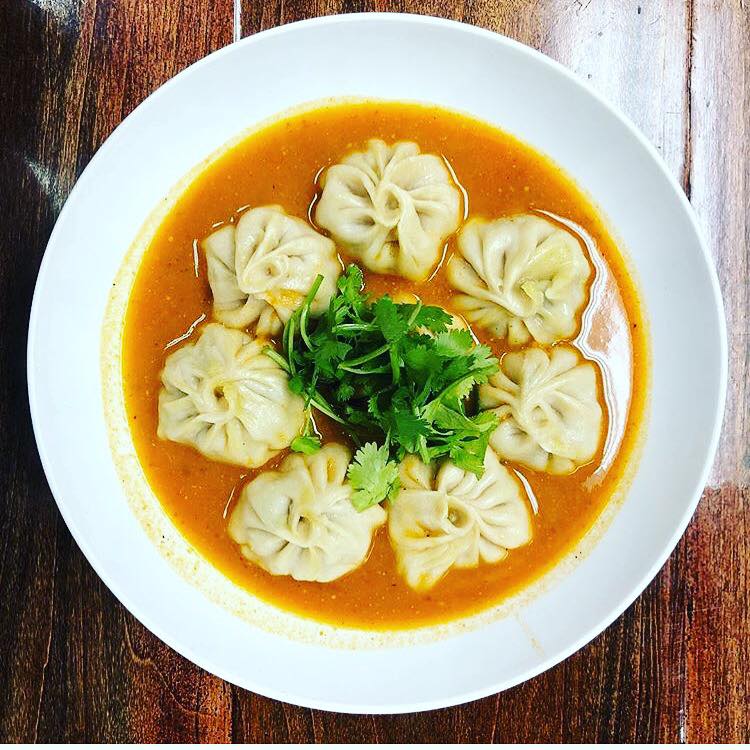 You’re all here because you already know Columbus is a great place to live. Only recently have people across the nation begun to realize it, too.

Here are seven Columbus food shoutouts from major publications all over the U.S. Eat up!

National publication Food & Wine featured the dumpling temple back in early 2018, calling it “One of the Best Restaurants in Columbus, Ohio.” The article explored owner Phuntso Lama’s journey to success including an early retirement, love, ambitions of becoming a bus driver, a “For Lease” sign, and eventually owning two very successful Nepalese restaurant locations.

The combination of the highly-flavorful dumplings, the hefty helpings, and the low price point make the choice of where to dine an easy one for many Cbusers and make Momo the center of many outsiders’ envies.

“This dish is a terrific thing to eat anytime—in the dead of winter, even more so,” writes David Landsel of Food & Wine. “A generous plate of eight plump momos costs just shy of ten dollars. There is house made hot sauce on the side, a fragrant blend of Indian and Mexican peppers. Once you try this food, you will never have any problem finding your way back here.”

Avishar Barua is the Executive Chef at Service Bar in the Short North and is making national headlines for his upscale rendition of his favorite childhood treat: Taco Bell.

Served two to an order, these tacos are built out of a paratha, a Bengali fry bread sprinkled with Kashmiri chili powder and turmeric. Inside of that is a crispy-fried corn tortilla shell filled with a generous portion of brisket that’s been oak-smoked for 18 hours

“One of the most fascinating dishes, however, tucked away at the bottom of the menu, is something that sounds very much like something you might scarf down at Taco Bell, after a reckless night out,” wrote David Landsel.

The Cheesy Brisket Crunch also got a nod from New York Times.

“In a lot of ways, Watershed’s success is a reflection of how Columbus has reimagined itself in recent years, with the city’s immigrant-powered restaurants getting the attention they deserve…and more chefs taking bigger risks,” says Parks.

Popcorn and Halibut Ceviche? In a wine glass? Coming right up!

You may think that combo is quite bizarre, but Esquire thinks Executive Chef David Belknap of VASO at AC Hotel Columbus Dublin and the mastermind behind the dish can change your mind.

Writer Justin Kirkland says Belknap’s experimental pairings are a challenges he likes to take on.

“It’s how he developed some of his most off the wall creations, including this one: a popcorn and ceviche dish that is somehow perfectly spicy, sweet, savory, and a little sour.”

Tucked back in an unsuspecting shopping center in a northern Columbus suburb is what Food & Wine calls “one of America’s best Japanese bakeries.”

Belle’s Bread thoroughly impressed writer David Landsel with its house-made “cream-filled brioche and curry donuts, melon rolls, spectacular-looking danish filled artfully with seasonal fruits, and some of the most perfect-looking loaves of sliced white bread you have ever seen.”

“This isn’t just a place to stop by for a bun and a coffee—this is cultural immersion, not just Japan, but modern-day Columbus, too,” wrote Landsel.

“I had a very good, if not exactly revelatory, spaghetti carbonara at Mr. Mitchell’s Marcella’s,” he wrote.

QSR Magazine has its eye on Ohio-based fast-casual sushi restaurant, FUSIAN. They slapped the establishment on their Summer 2017 40/40 list that names what they think are the best 40 fast-casual concepts with fewer than 40 units.

“We’d like to offer our stamp of approval for those brands we think stand the best shot at becoming the next big thing,” wrote QSR.

FUSIAN is right in the middle of the second tier out of four. They call tier two “On the cusp of greatness.” QSR Mag liked FUSIAN’s DIY sushi concept that allows customers to customize their sushi. They also complimented their chef-driven, signature menu items.

Did we forget your favorite local nationally-recognized dish or restaurant? Let us know in the comments below!