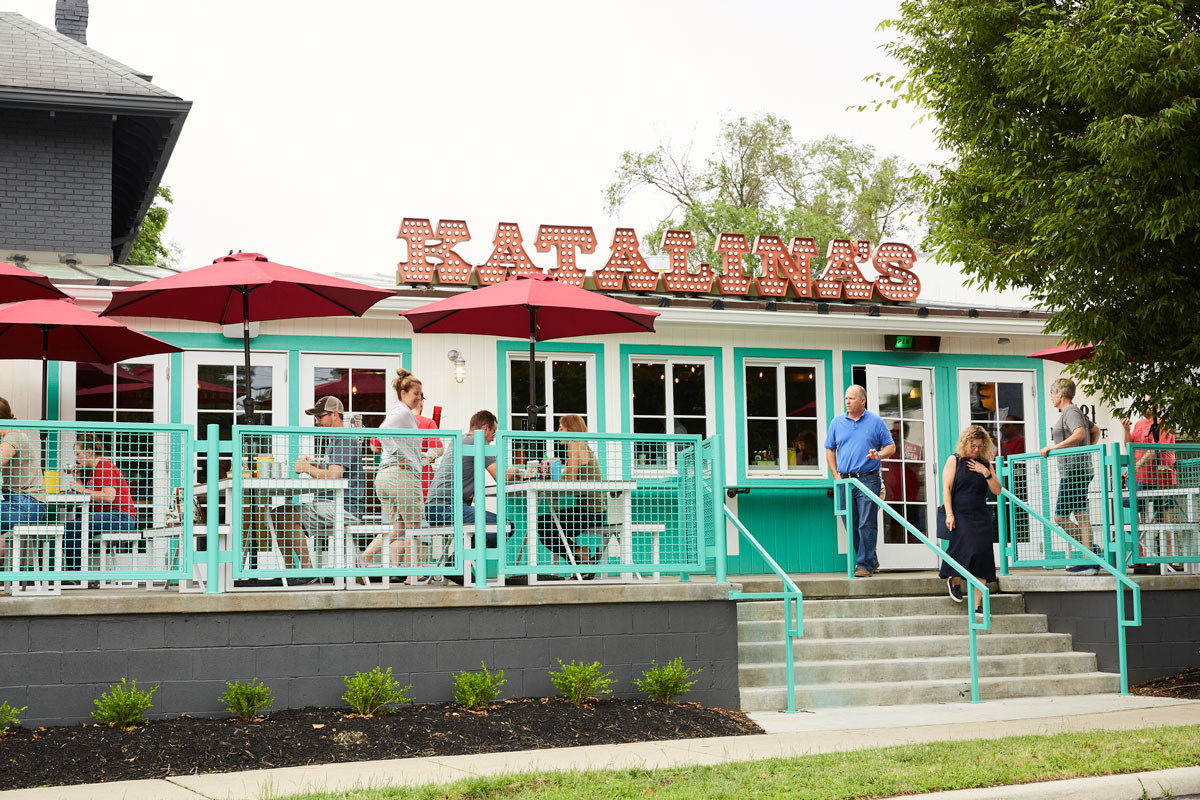 The city’s beloved (peace, love and) pancake balls now have a second place to call home. Expanding from their inaugural Harrison West domain, Katalina’s, welcomes diehard breakfast lovers to their new turquoise-coated digs in Clintonville. Much larger in space and seating capacity, patrons of Katalina’s, Too! may be reminded of another previous whimsical Columbus staple.

“We kept the integrity of [Vintage Fountain Pen Sales and Repair], so I think you’ll see both elements,” says Kathleen Day, brunch connoisseur and owner of Katalina’s. “It looks a little mid-century modern, but then I also wanted to keep the Katalina’s aesthetic. You’ll definitely see those architectural elements of the original gas station and when I first opened Katalina’s. I did not have a budget at all, hardly.”

Instead of breaking the bank, Day relied on flea market finds and decorative, chalk-based decor inspired by the original Katalina’s location. Guests of the original Katalina’s may recall the wooden, brightly-colored umbrella-covered porch, along with the heavily trafficked six-hundred square foot interior. While Katalina’s, Too! is six times as large as its predecessor, Day insists that the brand hasn’t strayed far from its roots. Though various Columbus neighborhoods tossed their hat into the ring to house Katalina’s, Too!, it was Clintonville that eventually took the gold.

One glance at the Katalina’s, Too! menu, and guests may develop a voracious appetite for the Prego Steak Sandwich, a Portuguese-inspired sirloin tucked between a brioche roll from Majita Breads and smothered by a housemade piri-piri sauce. With the belief that outsourcing may exploit the Katalina’s brand, Day purposely intersects her recipes with local resources, remembering that the first Katalina’s began from just a “pot and a spoon.”

“I think once they understand my brand values of ‘live, love, local’ organic and ethics, they kind of come on board. People really love working for Katalina’s because of the brand values and the team is wonderful. I couldn’t do it without them,” says Day. “I think the customers and the community here are just so passionate about food, local products and local farms, they just want more and more.”

As High Street steadily grows into a bar and nightlife sanctuary, Clintonville proved to be the leading choice for Katalina’s, Too!, even wiping out the cobblestone o -beaten path of German Village. With Harrison West being up-and- coming in 2009, Day admits that Clintonville’s familial aura is what generated personal interest. “I just happen to know from my friends living in Clintonville that it is a very family- oriented community and especially because I have a much bigger space I know there will be more kids there,” says Day, who expanded the menu to include a new kids menu. “I think my pancake balls are kid-friendly, but I definitely wanted to be a family-friendly destination.”

For vegans and those interested in transitioning into veganism, there’s an abundance of new plant-based specialties to choose from, but for dedicated brunch enthusiasts, Day’s next project is to expand the Original Pancake Balls TM into having a vegan alternative. “I’m a cook at heart and people will tell you you’re either a cook or a baker. I am not a baker and so I finally have a baker in-house and maybe she can help me on that. But it is very difficult to make a pancake that is as good without eggs,” Day admits. “I now have local Fowlers Mill Flour and they have created something that makes it easier for us. Now we just add a few items instead of making it basically from scratch even though it’s stone-ground flour which is much better for you than just regular white bleached flour.”

Joking that she’ll need a brief sabbatical away from the frenzy of opening Katalina’s, Too! and the demand for extended hours, Day is in no rush to create Katalina’s, Three, though she knows Columbus will be her eternal breakfast landmark. “This was pretty daunting and then my employees are all very excited to keep expanding, of course, but I think I need to just decide if it’s best for me and my employees,” she says. “They all love the family atmosphere of Katalina’s, and I just know from past experiences if you keep growing you can’t always keep the integrity of your original location. I would never want to become this corporate-type company because people love Katalina’s because it’s so unique and home-spun. I want to maintain that.”