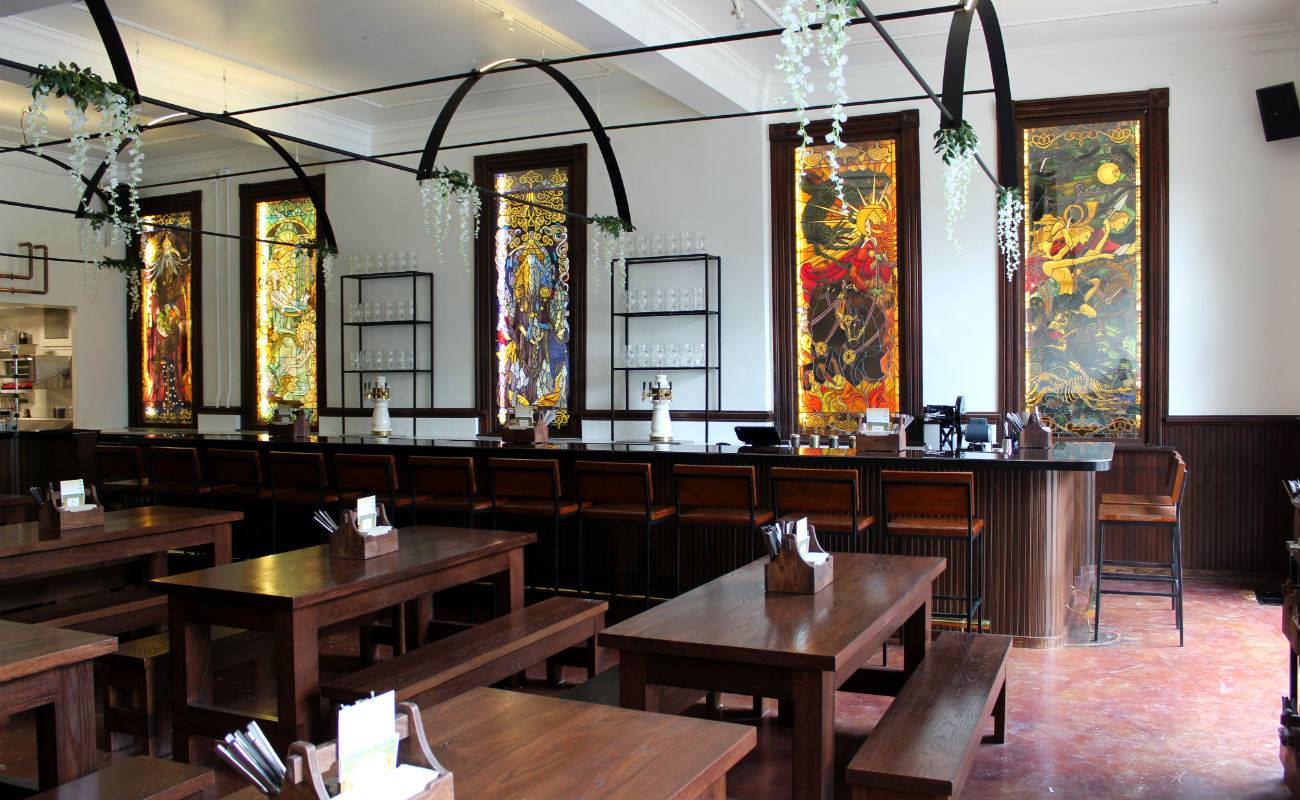 On an unusually warm September day, a few of us (614) staffers made the journey over to Olde Towne East to pay Columbus’ newest brewery a visit.

Gemüt Biergarten, located at 734 Oak St., opened to the public on August 22 and offers guests a cultural drinking and dining experience in a setting just as unique.

The Firehouse, formerly known as the Columbus Music Hall, is a grand and beautiful structure, one that owners Kyle Hofmeister, Rob Camstra, Nick Guyton, and Chelsea Rennie were careful to maintain during the renovation process. The original brick walls remain throughout the brewery and beerhall, but new and stunningly beautiful stain glass windows were installed behind the bar to greet customers upon arrival and illustrate the different Gemüt brews.

Speaking of beers, I went with the Alfheim Hefeweizen which was bright and, much to my delight, not too fruit forward. The dark and toasty Woden’s Hunt Dunkel and the crisp Helheim Helles are also debut beers at Gemüt with a couple kolschs, a marzen, and a pilsner hitting taps soon.

Inspired by European cuisine, the food menu offers a variety of German sausages, Schnitzel, along with several appetizers and large plates. Sunday brunch specials are also offered—keep an eye on Gemüt’s Facebook for updates.

With our beers in hand and our minds on the amazing Gemüt grub, we made our way out of the biergarten. The path to the patio took us past the pristine brewery where we got an up-close-and-personal look at the magic behind the malts.

We emerged onto a stone and brick plaza covered in picnic tables and partially covered by an upscale pergola. In the far corner, a fun-sized tables and chairs sit next to a Little Free Library—the perfect place for the tots to hang while the adults have their fun. A cute wooden gazebo populates another corner of the biergarten next to the al fresco bar.

As a resident of the Olde Towne East neighborhood, I’ve driven by Gemüt Biergarten in the evening many times to see the patio illuminated by dozens of Edison bulb string lights and wished I was there. And now that I finally got a chance to patronize the place, I wish I never would’ve left.

Take a virtual tour of Gemüt in the gallery below!
Note: use the left/right arrows in the upper-left corner to navigate between images.