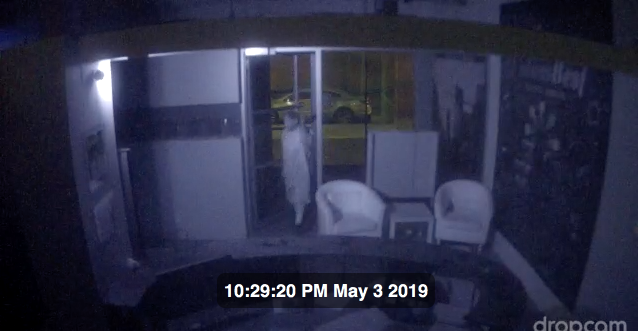 Well, this is embarrassing… At (614), we’re used to reporting the news, not being the news—so imagine our surprise when staff arrived at the offices this morning to discover we had been the victims of an apparent caper!

Over the weekend, our design office became a crime scene when a Mac desktop was hastily stolen, leaving a tangle of cords behind. After some initial confusion, a check of office security footage proved revealing.

A lone man exited the vehicle, and proceeded to enter through the front door. Oddly enough, he appeared to use a key.

The assailant—who appears to be a rather “husky” fellow in a cap and massively oversized t-shirt (or, perhaps, a muumuu)—can be seen in this grainy security footage walking in the direction of the (614) design office.

Moments later, our alarm system’s motion detectors are triggered, and footage shows the person in question exiting via the front door, carrying the computer. He can then be seen returning to the vehicle, which leaves the scene.

Authorities have been notified, and (614) asks anyone who may have information relating to this case to reach out to the Columbus Division of Police at (614) 645-4545. While an official composite sketch of the suspect is still forthcoming, we at (614) believe this artist rendering closely resembles the person in question:

See below to view complete footage from the incident. Needless to say, the locks have been changed and a high-resolution security camera is on the way. Feel free to leave any tips (or rub our faces in our own misfortune) in the comments!