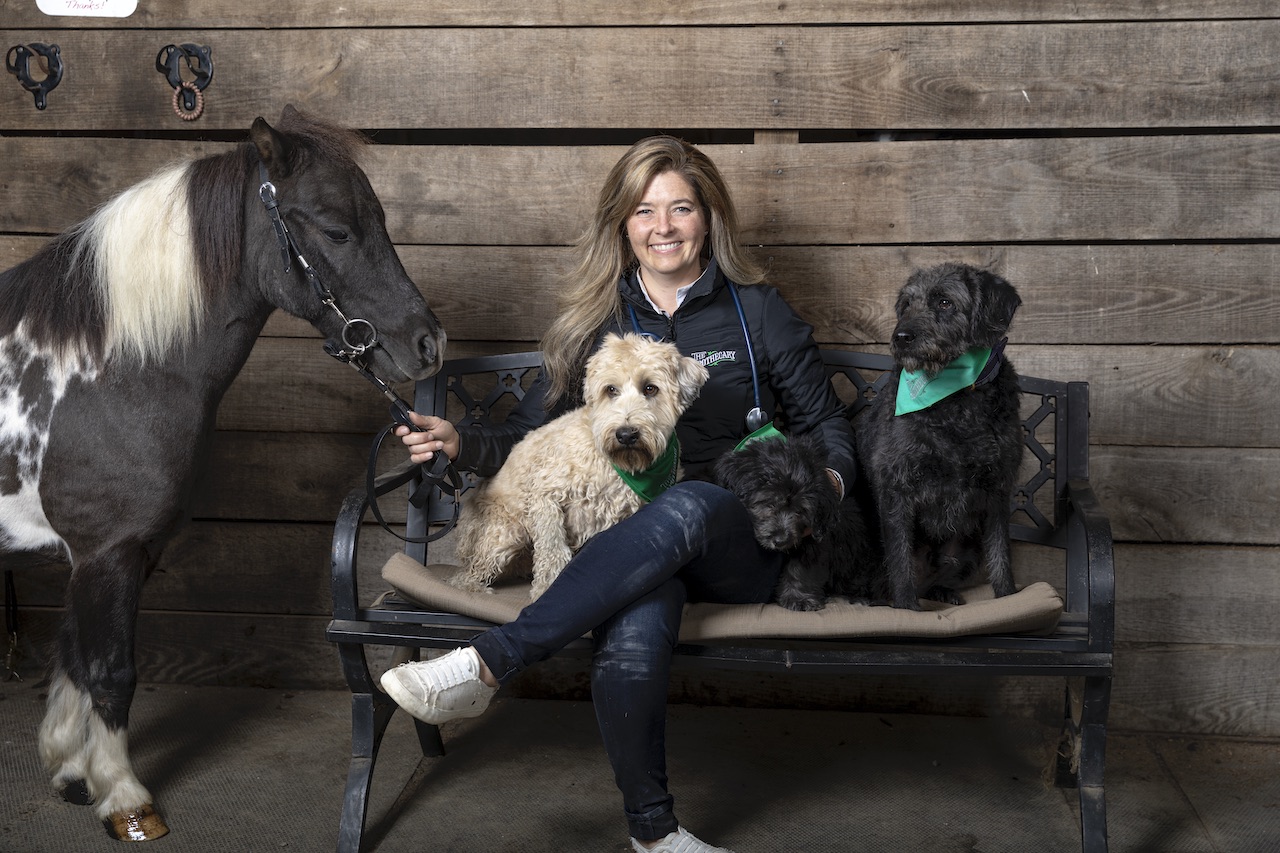 Dublin vet takes her medical practice on the road

The night before I spoke with Dr. Holly Helbig, the Dublin-based horse veterinarian with the unique part-vet, part-trainer, part-show rider practice, she was up until the wee hours of the night with a colicky patient.

It’s not unusual, Helbig said, either to be out late on a call or to find a horse suffering from gastrointestinal distress, especially given many of her patients are elite athletes—show jumpers with physical gifts and the delicate systems that often accompany them. Colic in a horse can quickly lead to dehydration and/or impaction, and is both painful and urgent. This night, she loaded her charge in a trailer and drove it around to, as Helbig described in technical terms, “try to get things to happen.”

Making things happen is a big part of how Helbig has built her professional reputation. Known on the professional show riding circuit as the horse show vet, Helbig spends the lion’s share of her year as the resident veterinarian at one of three horse competition sites: the World Equestrian Center in Wilmington, Ohio; Kentucky Horse Shows in Lexington, Kentucky; and Brave Horse in Johnstown.

“I was already at all the horse shows. They just started hiring me to be the attending veterinarian,” Helbig said.

Helbig, who grew up in Akron, Ohio, started riding horses as a kid. While her family wasn’t poor, she spent many hours working in the horse barns in order to afford the pricey hobby.

“I just wanted the opportunity to ride,” she said. “I was so driven.”

Driven enough to continue riding while earning her undergraduate degree in business and marketing, which led to stints as a wedding planner with the Ritz-Carlton in Boston and as a pharmaceutical representative for Merck. But she couldn’t shake her passion for horses, so she spent two years doing pre-registration work and four years in veterinary school at Ohio State University.

She continued to ride, working both as a show jumping professional or as a training rider. It was this training business that kept her active on the show circuit, leading to shows bringing her on as a vet once she began her medical practice.

Opportunity led to more opportunity. Seeing the need for an on-site pharmacy, Helbig started a mobile apothecary—“Everyone calls it a she-shed,” Helbig joked—which she takes to horse shows throughout the area even if she’s not the assigned vet.

“It’s been an evolution. When there’s been a void in the market, I’ve just tried to fill it,” said Helbig, who is currently pursuing licensing in chiropractic care for horses. “When something’s your passion or love, you keep at it. I’ve been creative and been able to carve out niches for myself where I’ve always been able to work with horses.”

Helbig’s Hawthorne Hill in Dublin boasts an indoor arena, where she both rides and trains young riders, additionally housing 25 or so horses at any given time. And with most shows shuttered due to COVID-19, she’s expanding her more traditional veterinary practice, serving both high-end, Olympic-level jumpers and field horses throughout the state. Earlier this year, she added a second veterinarian to her staff that also includes a teacher/trainer and a pharmacy professional.

“It’s really unique. I’ve worked with other vets, including horse vets, but to be able to work and still ride in shows is something I’ve dreamed of,” Dr. Kaylin Van Horn said. “I had no idea what I was getting into being a horse show vet, although Holly tried to tell me. It’s definitely different from general practice.”

Having two vets on staff who also compete gives Hawthorne Hill the added benefit of being “on the playing field,” Helbig said.

Training keeps her in regular contact with young people, mostly young women, and she delights in serving as a mentor for following your dreams, horse-related or otherwise.

“I’m the poster child for that. I took something I loved and wanted so desperately and now I have these three businesses that are all connected to that,” she said. “I wouldn’t change it for the world. I’m extremely lucky.”