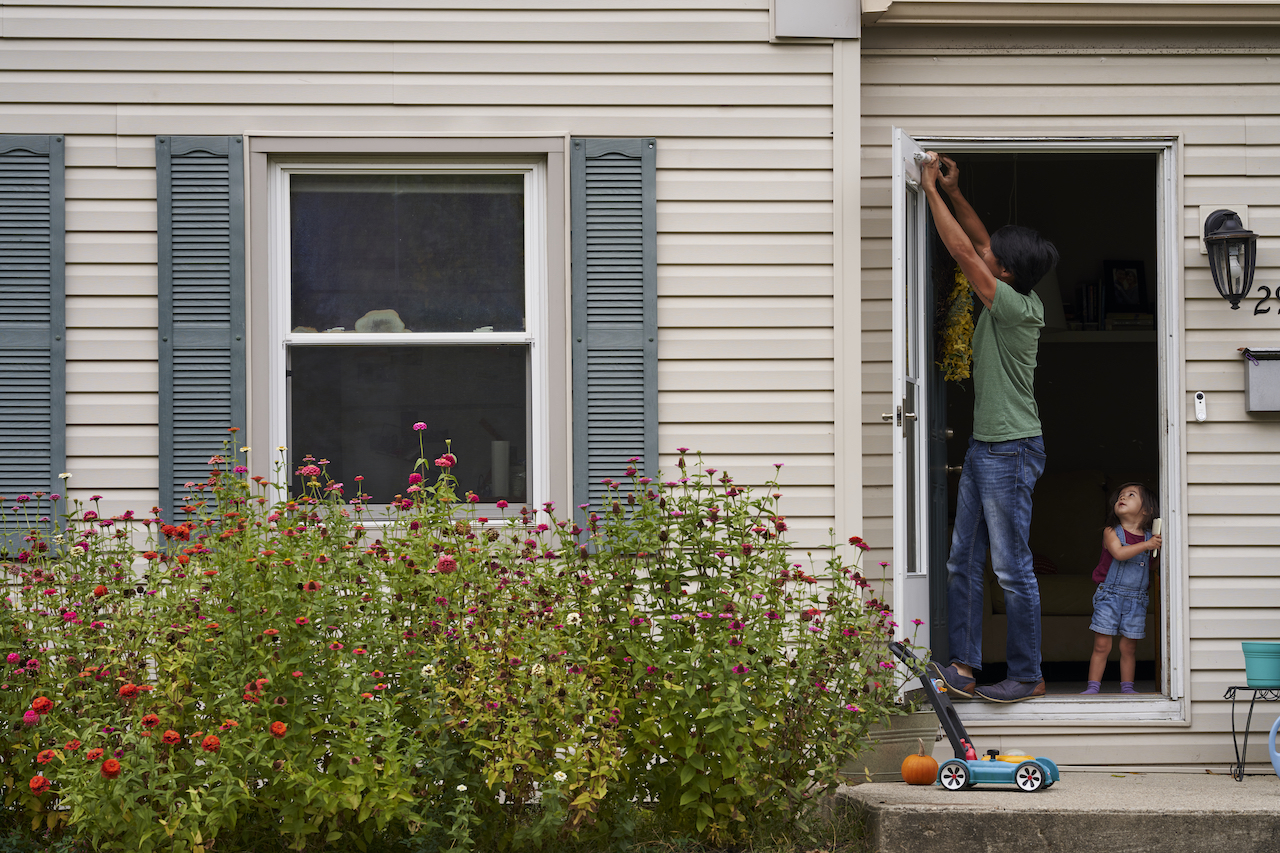 Although Danielle McKnight Zellner’s children have all grown up and moved away, she continues to live in the Linden community, where she’s been for the last 17 years. She works tirelessly in the community to assist the people of the Linden neighborhood through her position as a community service worker at St. Stephen’s Community House.

“A lot of times this community is just like a family, and that’s a big part of what keeps me here,” she says.

This sentiment seems to be a theme that runs throughout the Linden community— and is another one of the small but quietly beautiful surprises the neighborhood has to offer, with families staying in the same area, the same house even, for multiple generations.

“Our block is very unique. One house across the street, the grandparents lived there, now their grandchildren live there,” said one North Linden resident who wishes to remain anonymous. She and her husband bought their home in 1959, and haven’t moved since.

Thinking back on the years in her Linden neighborhood, she recalls block parties and social gatherings, as well as a neighborly friendliness that seems to be another hallmark

of the area to so many residents  “I remember meeting neighbors out in the middle of the street to talk. In fact, we still have one who comes over to use our lawnmower.”

Most Columbus denizens, however, probably consider Linden differently, because if you’re familiar with the community in 2020, it’s likely not in a positive way. The historic neighborhood, which has existed since the turn of the 20th century but wasn’t officially annexed by the city of Columbus until 1921, became a bustling middle-class neighborhood in the 1950s and 1960s. Today, with the population of North Linden just over half of what it was 60 years ago, the area has seen its share of struggle, and is no stranger to crime and poverty.

Many residents—those who have lived, worked, and served there for decades—will paint you a much different picture than those shown in the media, and often it’s one of a community on the rise.

“What we try to make sure of is we want to encourage the media and people from the outside to get underneath the mascara,” said Adam Troy of the New Salem Baptist Church, a Linden community cornerstone. “Typically the mascara is really hiding the truth. And the truth is, this is a really wonderful community.”

Troy will also be the first one to admit the area has its issues it needs to overcome—there is crime; there is violence. The once-thriving Cleveland Avenue corridor, which slices north to south through the neighborhood and serves as its primary commercial area, is now littered with empty storefronts.

Over the last few years, though, a new energy has overtaken Linden. This isn’t just a community with good people waiting for a break anymore; this community is on the precipice of real change.

In 2018, Columbus Mayor Andrew Ginther launched the One Linden Community Plan, a comprehensive, multi-year initiative to reinvigorate the area and its residents, with a surge of funding, new development, and community support projects. It’s bringing a new, $20M community center to Linden, and investing an additional $18M in infrastructure and community programs. Even more important than these contributions is how the plan has galvanized a litany of nonprofits and community groups, each aimed at making Linden thrive.

And if you talk to anyone in the community about the One Linden Plan, you’ll pretty soon find out that it boasts nearly monolithic support throughout the community. This is because the Plan relied extensively on community participation to formulate its goals, spending 13 months between March 2017 and April 2018 engaging with Linden residents to understand what the area truly needs.

For those who personally participated in the plan’s formulation, like Zellner did, knowing her voice would help shape things to come was a major incentive. “To know that my idea is going to somehow affect what’s going to happen in Linden, that’s huge. I think programs like that give people a sense of being a part of something. They’re also realistic; they’re giving people what they want.”

Residents identified the creation of affordable housing as one of the area’s biggest needs, and one of the most important groups in the community right now addressing that front is Columbus Next Generation Corporation. The nonprofit group, which is legislated and funded by the city government, seeks out underutilized properties in Columbus neighborhoods and puts them to good use.

According to Director Boyce Safford, the group has identified and purchased two pieces of real estate in Linden where a pair of large-scale housing developments are underway.

One will eventually become a 41 to 45-unit affordable housing development, but Next Generation hasn’t yet selected a developer for the space. The second, Mulby Place, will stand at the southeast corner of Cleveland Ave. and Myrtle Ave. Construction is already underway on the 100-unit development of affordable living for seniors, in addition to 11 single-family homes and over 3,000 square feet of commercial space. It will likely be completed in 2021.

Another Columbus nonprofit, Homeport, was selected by the Next Generation board of directors to oversee the development of Mulby Place. Homeport is also in the process of constructing another critical affordable housing developments in Linden area, including 90 different single-family homes, and Kenlawn Place, which will hold 45 apartments for low to moderate-income families (in addition to five single-family homes) on the West side of the 2900 block of Cleveland Ave.

“The key with Mulby Place Key is that it’s right in the area which the Linden plan designated as downtown Linden,” said Homeport CEO Bruce Luecke.

According to Carla Gwinn, President of the Greater Linden Business Network and a business owner in Linden for 19 years (as the franchisee of Liberty Tax Service at 1406 Cleveland Ave.), these developments in new downtown Linden will likely pay lasting dividends to other areas in the economy.

Said another tenant of the One Linden Plan, “Development is important for there to be a framework of viable retail space and other development opportunities in the area,” she said. “Once you see development starting, you may encourage more.”

And it isn’t just housing coming to Linden.

Likely the most unique project to come out of the efforts stoked by the One Linden Plan is the combination of two Columbus nonprofits, The Charitable Pharmacy of Central Ohio and Community Development for All People, in taking over what was formerly Eagle Market at 1464 Cleveland Ave. This development, which was also facilitated by Next Generation, will offer free prescriptions for non-narcotic medication to low-income residents as well as free fresh produce.

Many other groups are involved across a number of platforms, such as Nationwide Children’s Hospital, which is addressing health-related tenants of the Plan by providing pediatric clinics and school-based behavioral health services at several Linden schools.

What’s more, the 614 for Linden collaborative, formed in late 2019,  saw the city pair with a host of additional nonprofit groups and community partners, with the goal of advancing the One Linden Plan. It even saw an investment of $5M from JP Morgan Chase’s Raising Opportunity in Neighborhoods program, and a $500,000 donation from Huntington Bank for small-business development.

And while initiatives from the One Linden Plan rightfully garnered a large amount of attention, the area is built on a strong foundation of community programs that are still making a difference today.

One of these is St. Stephen’s Community House. The nonprofit, based on Linden’s Southside since 1960, first opened over 100 years ago as an educational and social hub for many of the city’s immigrants, and it continues that mission of service to this day. They offer programs for teens, seniors, families, and even run a food bank that has fed nearly 700 families a week during the pandemic, according to the director of marketing and development Natalie Atkins.

Anchoring community service programs on the Northside of Linden is the New Salem Baptist Church. The church, founded in 1909, is anchored by the Troy family, pillars of the community for decades, as they continue to extend after school programs, urban gardening, a large-scale food pantry, housing initiates, and even programs helping local businesses secure critical funding.

And it appears people are truly taking notice following the waves of support and development in Linden. A lot of people. Danielle Zellner has seen a significant spike in home owning and real-estate interest within the last few years.

“We definitely have noticed the growth. People are looking into homeownership now. That’s huge. Five years ago, people were not looking to buy,” she said.

What’s more, Linden neighborhoods are seeing a new influx of younger families moving in from other areas of the city, a definite sign that the arrow is pointing up.

Amy Miller, 37, grew up in Upper Arlington, and most recently lived in Clintonville, two of the city’s more desirable neighborhoods. Now, though, she and her husband Ryan are homeowners in the North Linden neighborhood of Kenmore Park.

The couple was turned on to the area after visiting friends who were located in Kenmore Park. When the time came to purchase their own home in early 2019, they found a good deal on a home they liked. Miller admits she had some misgivings about Linden before learning more about the neighborhood, but now the young family couldn’t be happier with their choice.

“I will say yes, I had a perception that there was more crime, definitely compared to UA there is more crime, and that made me nervous at first. But since coming here we’ve met so many people and really truly become friends with them in a short period of time,” Miller said. “The Houses are closer together, people are out more, and they’re more interested in chatting. There’s a desire to connect here more than any other neighborhood.”

“There are food trucks in our neighborhood every Friday and Saturday, and Tuesday evenings there’s a playgroup that meets at a grassy area in the neighborhood. And there are traditions, a movie night on certain Friday nights with a projector. It’s just a great community to be a part of.”

Ultimately Linden, like any community, is truly made or broken by its citizens. And if there’s one thing residents—of 60 years or 18 months—have sung the praises of, it’s the people.

“The Linden community is woven with a fabric of incredibly caring, hard-working people trying to provide for their family,” said Carla Gwinn. “I think the headlines undermine that, but the headlines don’t represent the everyday people I come in contact with; that doesn’t represent who we are.”

“This community is strong, it has the most involved community members that are proud of the history of this neighborhood, proud of where it’s going, where it’s been, and how far they’ve come,” she said. “It’s always going to be cautiously optimistic, but I think there’s this vibrancy now, it’s radiating through a lot of different facets of this community. You see the growth, and you see what’s coming.”