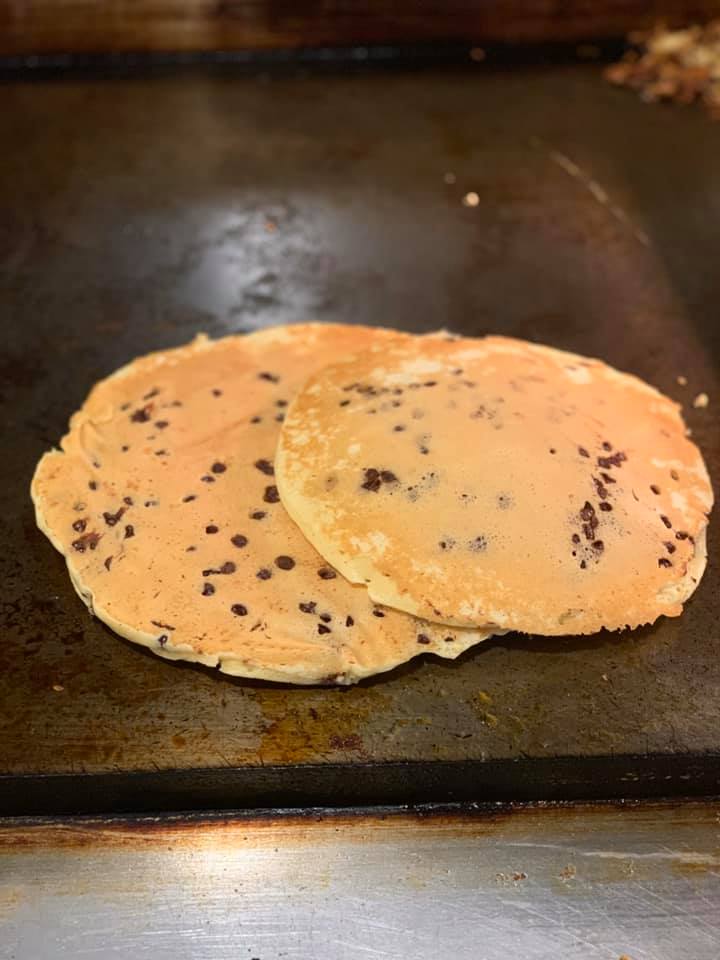 While the age-old debate about which breakfast standout—the pancake or the waffle—is better, we’re not here to take sides.

We love both and wanted to share our favorites with you. There are a lot of fantastic spots to pick from in Columbus, and it was tough to leave out some great ones, but we’ve put together a list of our three favorite waffle and pancake stops that are good enough for breakfast, lunch, or dinner. Dig in.

Pancake. Balls. Do I even have to keep going? While this might not win me any points among the purists, trust me: These things are incredible. In fact, Katalina’s even trademarked their name, Original Pancake Balls, due to their immense popularity. Crafted with flour from nearby Fowler’s Mill, these delicious little spheres of pancake batter are more than meets the eye, as each is stuffed with your choice of decadent fillings, such as Nutella, dulce de leche, or Katalina’s Pumpkin-Apple Butter. They’re served with local maple syrup and topped with powdered sugar, and you really can’t get much better for breakfast.

The DK in this Grandview diner is short for Donut Kitchen, but they also offer some of the best—and most sneakily original—pancakes in Columbus. These gems appear on the DK Diner menu as simply “DK Pancakes,” but this simple presentation shouldn’t fool you. According to DK, they’re actually created using the diner’s vanilla donut mix. It results in a unique pancake that’s rich and decadent, and makes chocolate chips the perfect pairing. And don’t just take my word for it: People across Columbus positively rave about them.

Even with great spots like Pancake House, Delaney’s Diner, and Northstar Cafe on our shortlist, we had to go with this (probably) lesser-known Clintonville diner for our third and final pancake spot. More than one person I spoke to about Beechwold told me flat-out that these were the best pancakes they’ve ever had. Referred to as “hotcakes” on the Beechwold menu, they can be ordered a la carte (for $2.50 each) or alongside items like eggs and french toast. And one of our favorite parts about this Clintonville restaurant—other than the food, of course—is their wholly authentic, no-frills, throwback diner setting that’s just about as wallet-friendly as it gets.

If you love waffles and can make the trek out to Gahanna, what are you waiting for? Superchef’s is the product of Columbus native and celebrity chef Darnell Ferguson (who has appeared on hit shows such as “Guy’s Grocery Games,” “Beat Bobby Flay,” and more), and it’s not hard to see what propelled him to fame. With an eclectic list of sweet waffles (blueberry, chocolate chip, candied bacon, and more), Superchef’s is also serving up some really inventive combo dishes, like the HULK (green waffles sandwiching eggs, cheese, sausage, and candied bacon) and Wings & Waffles, which serves up six maple heat wings on top of a waffle drizzled with maple syrup, powdered sugar, and a strawberry garnish.

While the other two waffle spots on our list are known for their inventive flavors and oftentimes wild flavor combinations, South of Lane in Upper Arlington takes the middle road: simple, straightforward Belgian waffles that are house-made and just really, really good. Because sometimes that’s exactly what you want. This chic, neighborhood cafe is cozy and inviting, offering a plain Belgian waffle as well as add-ons such as bacon, blueberry, peanut butter, and Nutella.

Similar to Superchef’s, this Clintonville-based food truck (usually parked at 3589 Indianola Ave.) has—very quickly—made a name for itself by offering a menu of waffles that are just as creative as they are delicious. Named after Winston Churchill, the spot offers waffles in two categories: Common Style (regular, malted waffles) and Crown Style (sweet, Liège-style waffles). The former includes waffles like The Empire (stuffed with Weiland’s sausage, topped with fried egg, cheese, romaine, and mayo) and Northampton (stuffed with buffalo chicken breast and topped with bleu cheese, shaved celery, red onion, and Buffalo mayo). Their Crown waffles let the caramelized pearl sugar (their secret ingredient) do most of the work, meaning they’re great on their own or topped with whipped cream and Nutella.