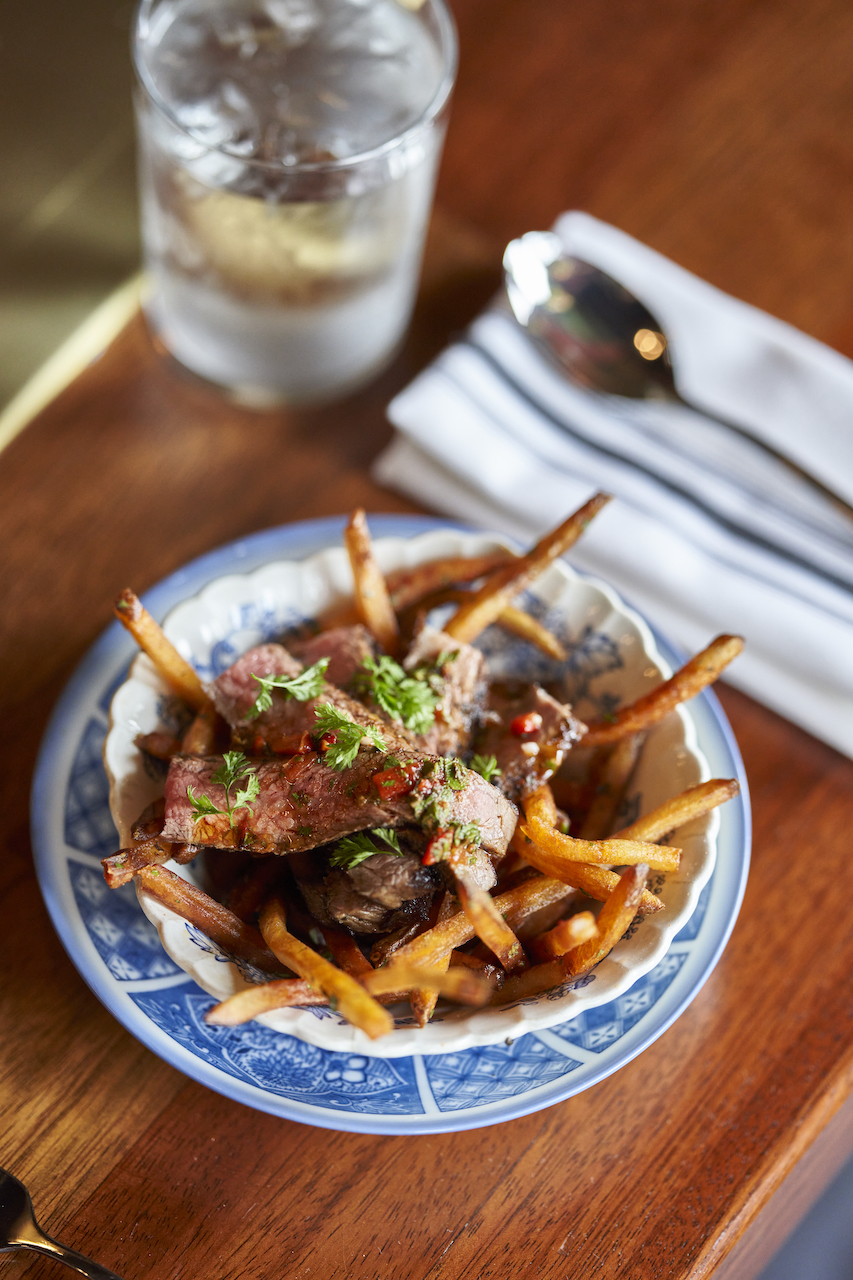 Get your ‘Gobbler’ on

At Chapman’s Eat Market, Chef and Co-Owner BJ Leiberman is not so much the star of a restaurant, but more of a mastermind behind an all-star culinary quartet, gathering minds from Columbus and afar.

“My directive is just do your thing; I’m kinda sick of my own food. I’ve been eating it for a really long time now. There’s a few things I’ll be insistent we have on the menu but I’ll give them the idea and then they go and do it their own way,” explains Leiberman of his chefs at Eat Market.

Pulling from his past, Leiberman brought in Wes Grubs, previously from Husk, as chef-de-cuisine, and his girlfriend Pam Berry as general manager. He then reached out to Justin Singer who he previously tried to bring on as chef for Little Pearl in Washington, D.C., to fill out the role of sous-Cchef, and Seth Laufman, previously of the Blind Lady Tavern as beverage director.

This innovative hive mind approach shows up in dishes like the Khao Soi, a traditional Thai dish that BJ first experienced with his wife while on their honeymoon. “I gave Wes the idea for the dish and talked him through each of the components, and what he gave us was this incredible version of the dish that was more authentic to the memory of the dish than what I actually had in my head.”

A similar situation led to the creation of the restaurant’s ice cream program headed by Singer. “I taught him the ice cream base that I developed for Roses Luxury, and he just took off from there.

“My favorite thing about this place is I can brag about the food in my own restaurant, and not feel like I’m bragging about myself because everyone else is doing all the things.”

While the ultimate goal is for Chapman’s Eat Market to become a spot where people can feel comfortable coming in as regulars, the pandemic has shifted their focus for the time being to a tasting menu that costs $60 a seat, with the option to add on drink pairings for an additional $30 per person.

“We really only wanted to be open for carryout just to limit our staff’s exposure to other people; when we realized that wasn’t fully sustainable to do, we tried to figure out a way to bring people in that would still limit the exposure—so we settled on a pre-selected menu, and figured out how to price it right so it’s a good value for anyone who comes in.”

While initially the tasting menu pulls on many of the carryout menu’s options, it is quickly evolving to offer new courses regularly that aren’t featured on the traditional menu. “We really want to be able to use it to try things that don’t make sense for carryout, and provide a rich experience for people who come in.”

As for how long it will be around “when it comes to transitioning to normal service we’ll probably just rip the Bandaid off and switch over when we feel comfortable with having that style of service again; we may continue to offer a tasting menu in some capacity, but it’s hard to say for sure.”

Outside of carryout, the restaurant offers an incredible selection of to-go meals ranging from lamb shank barbacoa to a double-pattied burger with specially-crafted buns, meat, and toppings.

“The thing we’ve worked hardest for is our sandwiches, everything we put on them we put love into, and every part of it the fries included is a multi day process. They’re all so simple, but if you really put the love and time into it, you can really taste the difference.”

Accompanying the meals is a selection of cocktails and wines curated by Seth Laufman While a traditional cocktail menu exists, featuring drinks like “The Royal Color,” a drink made with Mezcal, Ancho Reyes, Creme de Cacao, and lime and blueberry syrups. The optional beverage pairing is where the collaboration between Lughman’s drinks and the kitchen really starts to shine.

“Each drink is designed to go between dishes so they provide flow to the whole meal,” says Lieberman. This method of pairing along with the smaller sizes of the drinks allows everything to blend together into a wonderful culinary experience.

While Chapman’s is sure to change over the coming months and continue to surprise us with new dishes and methods of dining, it is certainly making a case for being a part of the incredible culinary canon forming in Columbus, Ohio.