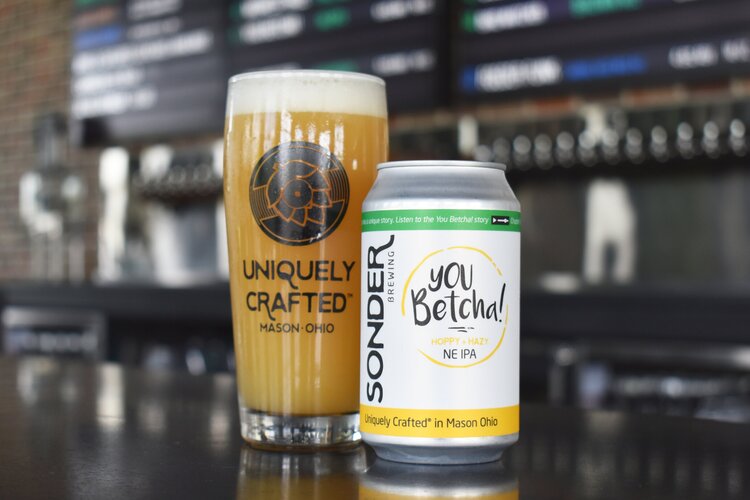 One of the greater Cincinnati area’s most up and coming craft breweries, Sonder Brewing, is making its way onto shelves in Columbus.

The brewery, located in Mason, Ohio, roughly 20 miles northeast of downtown Cincinnati, opened in the fall of 2018 from a 15,200-square-foot brewhouse. They offer an eclectic menu of hop-forward IPAs, bright and crisp lagers, plus the occasional experimental style for good measure–both on tap and in 4-pack and 6-pack options. From a milkshake IPA to a tiramisu stout with chiles, they’re definitely on the pulse of beer trends.

According to Daniel Schmerr, vice president of sales at Sonder, the brewery received immediate interest from Columbus vendors following their initial opening, but chose to focus on Cincinnati before considering expanding.

“You know, we had a couple accounts in this area reach out pretty much right when we opened, but at that time we first wanted to make sure we could adequately supply our area,” he said.

Eventually, Sonder acquired a pair of new 60-gallon fermenters, which allowed them to produce enough beer to consider expanding into the Columbus area. Following a successful expansion into nearby Dayton, Sonder was ready to make their move to the state capital.

And then the pandemic came.

“Once COVID hit we really didn’t feel like it was the right thing to go into the Columbus market while there are so many local breweries that really needed to be selling their beer there,” Schmerr said.

This summer though, once COVID-19 cases declined and business restrictions relaxed, the brewery began their first real distribution efforts here.

They’ve been at it for roughly three months, Schmerr estimates, and can currently be found in approximately 25 bottle shops and local craft stores.

Sonder Brewing is offering several different 6-packs in the Columbus area now, including fan favorite You Betcha! NE IPA, in addition to 4-packs of specialty offerings such as their Frosted series (featuring milkshake IPAs with a range of different additions, like mango and key lime) and their lineup of sour beers.

If you’re looking for a Sonder beer today (and why wouldn’t you be?), check out spots like Savor Growl, Wine & Brew Emporium, Savor Pint, Gentile’s Wine Sellers, Discount Drug Market in Polaris, and the Ohio Taproom.

And while they haven’t made the jump into Columbus taprooms yet (mostly due to the fact that the pandemic has drastically impacted taproom sales), you can get a draft pour of a Sonder brew at Savor Growl in Clintonville and Flip Side in Easton.

According to Schmerr, Sonder should be popping up in more and more smaller retailers regularly, and the brand aims to have a larger presence in Columbus grocery store chains Kroger, Giant Eagle (including Giant Eagle Market District), and more by the Fall of 2021.