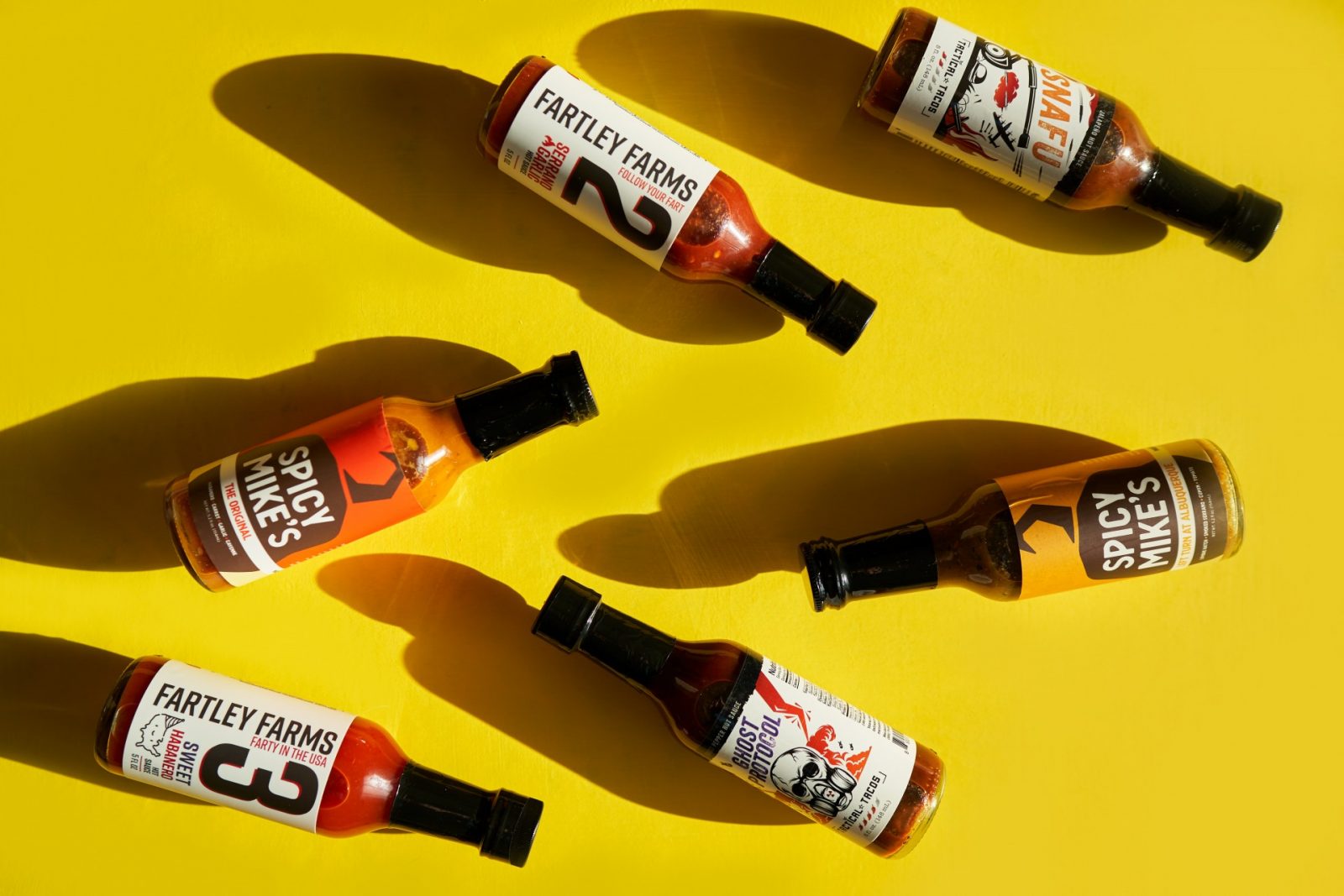 Acquisitions are part of business. You fall in love with a hometown company (you know the ones), and one day, they’re, well, not so local anymore. Sure, the product is still great, but what do you do if you want to keep your dollars local, to help small businesses, to support the next big thing? We found three up-and-coming Columbus hot sauce producers who fit that bill.

The Fart of it All

“If you’re gonna take life so seriously that you get mad about hot sauce names, this isn’t for you,” Fartley Farms founder Ron Fartley jokes. Fartley has taken the age-old hot-sauce joke and given it a different vibe. “You see these crass, easy jokes, but we wanted to bring a little class. I’ve always been into puns, so I looked for things with ‘heart’ in the name.”

“We also want to be a spicy resource,” he continued. His wife, known as “The Lady of the Farm,” is co-owner, overseeing their expert social media presence and website. Their website ranks the city’s spiciest dishes in its “Spicy Sherpa” blog and provides recipes that are as fun to read as they are to eat.

Still, the sauce is the heart of it all. “Warm Your Cold, Dead Fart” is a garlicky sauce that packs a punch of Carolina reaper, ginger, and maple syrup and is downright amazing on super-hot wings. “Follow Your Fart” is more for the masses–a low-sodium, no-sugar-added serrano sauce that’s good on almost anything. And “Farty in the USA” takes the middle ground, blending the hotness of habanero pepper and the sweetness of brown sugar to perfection.

But for all its scatological glory, Fartley Farms’ packaging is low-key enough for mixed company. There are no flaming keisters, no glaring colors or outrageous fonts to put the joke before the product. Looking closely at the sideways-printed name, you wonder “Did they actually just say that?” Yes. Yes, they did. And it’s all good.

A Matter of Trust

“This was not the trust fall I wanted from 2020,” laughed “Spicy” Mike Leone over a cup of coffee. The retail locations and restaurants Spicy Mike’s expected to expand into were shut down. Leone and his wife closed on a house; then he was furloughed at his day job, then laid off. “It’s earlier than I would have liked to push Spicy Mike’s to my full-time gig, but it’s what’s come across my plate, so I’m gonna roll with it,” he said, smiling.

Leone’s wife, Amanda Leone, is co-owner and handles the business side; Mike is the foodie and the creative. He sources peppers, vegetables, and herbs from local farms as much as possible, as well as from their own personal garden.

Spicy Mike’s has focused its sales on farmer’s markets, usually Clintonville and Westgate. Their best seller, full of succulent Fuji apples, is “Smoky Apple Habanero” and sells out quickly wherever it appears. “Pawpaw Spice” combines ghost chile peppers and sweet spices with pawpaw fruit. And their “Funky Three Pepper” sold so fast last year that Leone never got any for his own personal stash.

This fall, Spicy Mike’s will debut “You Don’t Want This,” a righteously hot, thick sauce full of vegetable and spice flavors and scorpion peppers that intensify for about five minutes. The name says it all—if you’re not serious about savage heat, you’ll want to pass on this one. But if you are serious, it’s delicious.

Tactical Tacos owner Mike recalls his initial attempt at a barbecue sauce made with “Ghost Protocol” hot sauce: “It was so hot, the first bite made my ears start ringing.” Fortunately, his sauces alone are flavorful but much less brutal.

Tactical Tacos’ three sauces—SNAFU, Fire Fight, and Ghost Protocol—are not for shrinking violets. “SNAFU” is bright and citrusy, with jalapeno, cilantro, and a smoky hit of adobo. “Fire Fight” adds habanero and other medium-heat peppers, while “Ghost Protocol” tacks on ghost peppers for a serious bite. In the works for 2021 is “Green Beret,” a verde sauce.

Mike and co-owner David (who go by only their first names) met in school and later worked together in the technology industry. The company name reflects Mike’s former military service in Iraq and Afghanistan and the sauces’ origins in his taco-meat marinades. He and David experimented with fiery flavors and shared their samples at work prior to starting the company.

In contrast to most hot sauces, Tactical Tacos’ are based on citrus instead of vinegar. “We try to make it unique and delicious, and the heat is something extra,” Mike said. They use powdered chile to keep the recipe consistent across batches, layering different flavors on a common base. The citrus tastes great but also makes these sauces into deliciously mean marinades.

So next time you crave something spicy, go grab a few of these new and truly local sauces. Adventure awaits.

Put a Lid On It

Like the flavor but not the fire? This fall, Spicy Mike’s plans to debut “Not Hot,” a hot sauce based on red bell peppers with a heat rating of practically zero. “I do make sauces for everybody,” Mike Leone said. “We get people who say ‘I like hot sauce, but hot sauce doesn’t like me.’ This will be for them.”

And, while Tactical Tacos’ citrus-based sauces are all spicy, they’re made to be marinade-friendly, so use just a little with your favorite juices and sugars to tame the heat.

Or add one or two drops of any of these sauces to a cheese or sour cream-based dip, since the lactose in dairy tempers the burn.