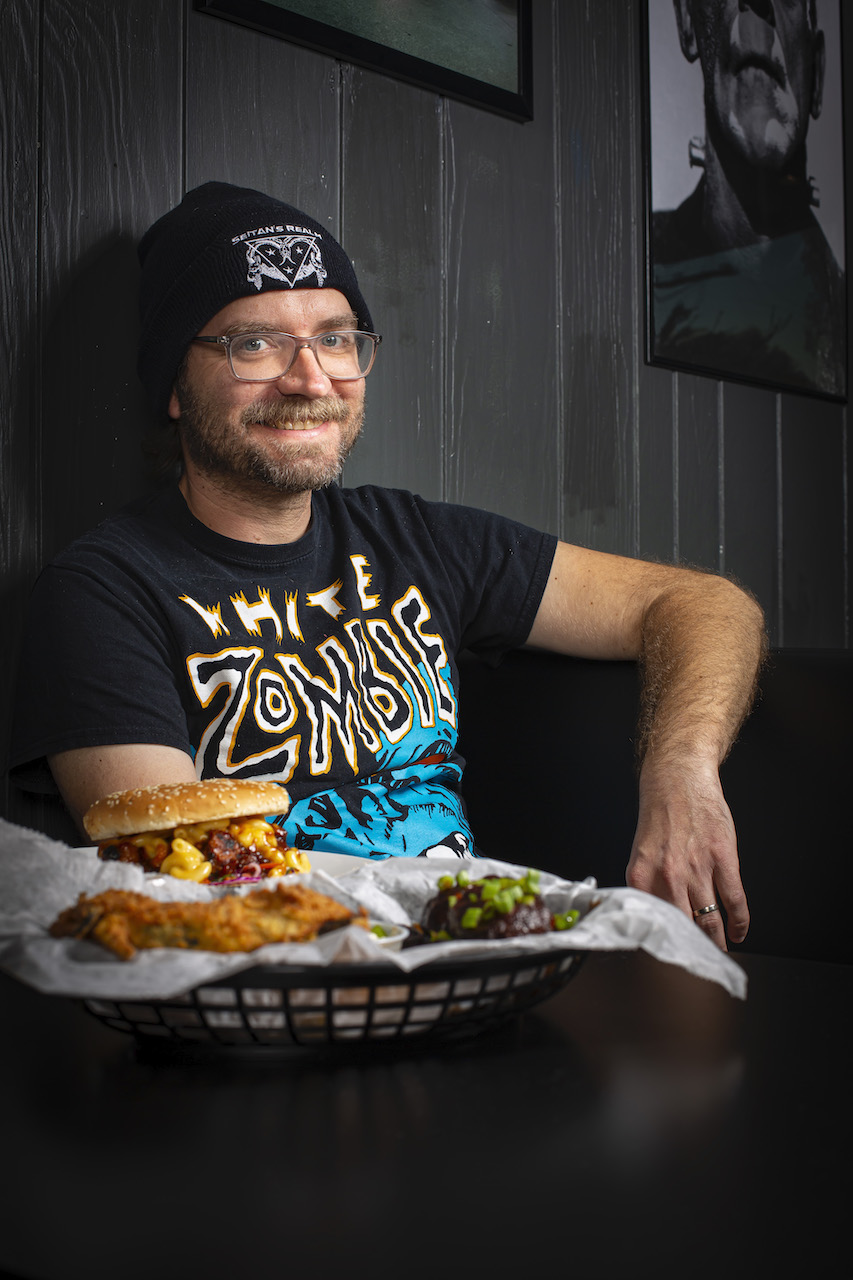 Move over, doughnuts: these are the best fritters in Columbus

One of the first images that will catch your eye upon setting foot into Seitan’s Realm brick-and-mortar restaurant at 3496 N. High St. is a poster behind the register: a depiction of Bill Murray as the Virgin Mary. Even in the storefront’s windows, you’ll find quips of classic ‘80s albums London Falling (Seitan Calling), Appetite for Destruction (Appetite for Seitan), and Master of Puppets (Master of Seitan).

The punny posters are appropriately fitting for the plant-based restaurant that its owners Kevin and Amber Ridenbaugh crack some jokes about at the expense of those that might not understand that seitan—a wheat gluten meat substitute—is just some wacky wordplay and not code for a satanic cult.

“We really just wanted to be edgy and have fun with stuff,” said Kevin, who is beyond excited that its former food truck is now a brick-and-mortar location. “We don’t take ourselves seriously about anything, and we almost did it as a joke just because we thought it was funny. I think a lot of people really grabbed on to that.”

Columbus foodies also grabbed on to Seitan’s Realm’s fulfilling vegan dishes. To add to the list of delicatessen puns, the restaurant will still be offering classic favorites. Those searching for a vegan meal will find the Shia LaBuffalo (a mouth-melting fried seitan chikun patty sandwich) and Rick Reuben (a marvelous marbled rye, corned beef creation), as well as new meal-related innuendos such as The Notorious B.B.Q. (hand-shredded smoked porq goodness).

Sides such as the loaded baked potato salad, jalapeno poppers, and desserts baked by Amber are all included on the new amped-up menu, which wasn’t possible before within the confines of a food truck.

“It’s really hard to have 15 items on a food truck,” said Kevin. “You have to usually narrow it down to about eight.”

No longer serving food out of a truck has also tripled productivity. Before, Seitan’s Realm could only fit about eight loaves of seitan in its food truck, which had just one oven. Now it can fit about 24.

A new and exciting development from serving its food in a brick-and-mortar is the addition of a deli, where they are selling items like bacun and vegan roast beef by the slice.

“We had somebody come in for the soft open and was like, ‘Oh my gosh. I haven’t ordered deli meat in forever. I don’t know how much an ounce is,’” Amber said.

Amber has been a vegetarian for most of her life, but the two decided to both go vegan over a decade ago. Still, Kevin missed eating his favorite meals such as gyros, cheesesteaks, and even Arby’s Beef ‘n Cheddar. With a lack of local vegan options to satisfy his needs, Kevin went to the kitchen to whip up those items himself, vegan style. The product, which was workshopped for about three years, was a success amongst his wife, family, and friends, so the two decided to take that passion for his vegan experiment to the streets.

“We started trying to make things that we really wanted to eat that were hard to find out at restaurants and thought how cool it would be if we could offer those things to other people,” said Amber.

Recently, someone took a page out of the Ridenbaughs’ culinary book, buying some pepperoni and mentioning how they’re going to use it to make their own rolls. Kevin hopes to see more of that creativity with the inclusion of a by-the-slice deli.

With the food truck days now in the rearview of Seitan’s Realm, no longer will the Ridenbaughs have to deal with a middle finger or two waved in their faces while on the way to a gig from those who don’t “get” the Seitan part. However, with the Internet still existing (last time we checked), they still might see a crappy Facebook or Instagram comment here and there from someone not keen on what Seitan’s Realm is actually doing for the community.

And even the world.

“We do it for the animals and we’re doing it for the earth to cut down on pollution,” said Kevin. “There are all kinds of really good and positive things that happen about being vegan, so it’s kind of stupid that [some people] think that we’re trying to bring some witchcraft stuff up and burn the world down. We’re actually trying to save it.”

For now, Seitan’s Realm plans to be open Thursday through Saturday from 5 to 9 p.m. with hopes to expand to five days a week. The restaurant offers socially-distant dining with four indoor tables, delivery through DoorDash, carryout, and curbside pickup.