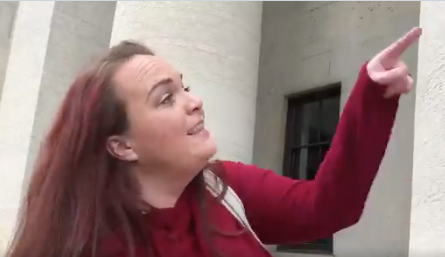 During Friday’s protests outside the state capitol, a protestor was caught on camera berating NBC4 reporter Adrienne Robbins who was there to cover the event. The protestor, who has not been identified, complained about coronavirus media coverage saying, “The company you work is lying to the American people and you know that what you’re doing is wrong.”

The incident was caught on camera by Cleveland.com’s Laura Hancock.

I asked this woman to respect my space after she was yelling and spitting in my face. She said i had no right to social distancing in public and continued to follow me. Complaining about my mask (that is meant to protect her and those around me). https://t.co/M7BX888z11

“The person who was talking to me seemed like she had a very big problem with the media, and that was her main focus,” Robbins said in an aired interview on her own station. “Other people are obviously concerned with their jobs and the stay-at-home order.”

Condemnation of the protestor by fellow media members was swift and forceful.

This is NOT ok. Protest, express yourself, share your opinion, stand up for what you believe in but don’t act like this. Spitting on someone and attacking them for trying to be safe. Why? Totally out of line. I don’t think I would have been as composed at @ARobbinsTV 👏🏼👏🏼 https://t.co/AhdUWUKUrX

Journalism is lucky to have you, @ARobbinsTV, and so are viewers and readers.

I wore a mask while at rally Saturday to monitor and no one approached me to ask my age. (Another clip)

Thank you for your work.

This was followed by about two dozens protestors standing across the street and holding signs in front of Amy Acton’s home in Bexley, Saturday. Some reports say armed men were part of the protest group.

The majority of posts we saw on social media largely felt these protests went too far, particularly the targeting of a state employee at home. The outrage by private citizens and elected officials was vocal.

Dr Amy Acton is Director of Health for the state of Ohio. Men armed w/ assault weapons gathered at her home to protest her doing her job to keep Ohioans safe from #COVID19. If there were armed men of color on that suburban street they would have been arrested. #ThisIsAmerica https://t.co/ZFMHMN0W2Q

Intimidation of a state employee at home or anywhere else is completely unacceptable. Shame on any elected official or political candidate who incites, perpetuates, or condones this vitriol. We are better than this, Ohio. https://t.co/4MyGtXOcEi

Today, and every day, I stand with Dr. Acton.

What do you think, are protestors going too far?