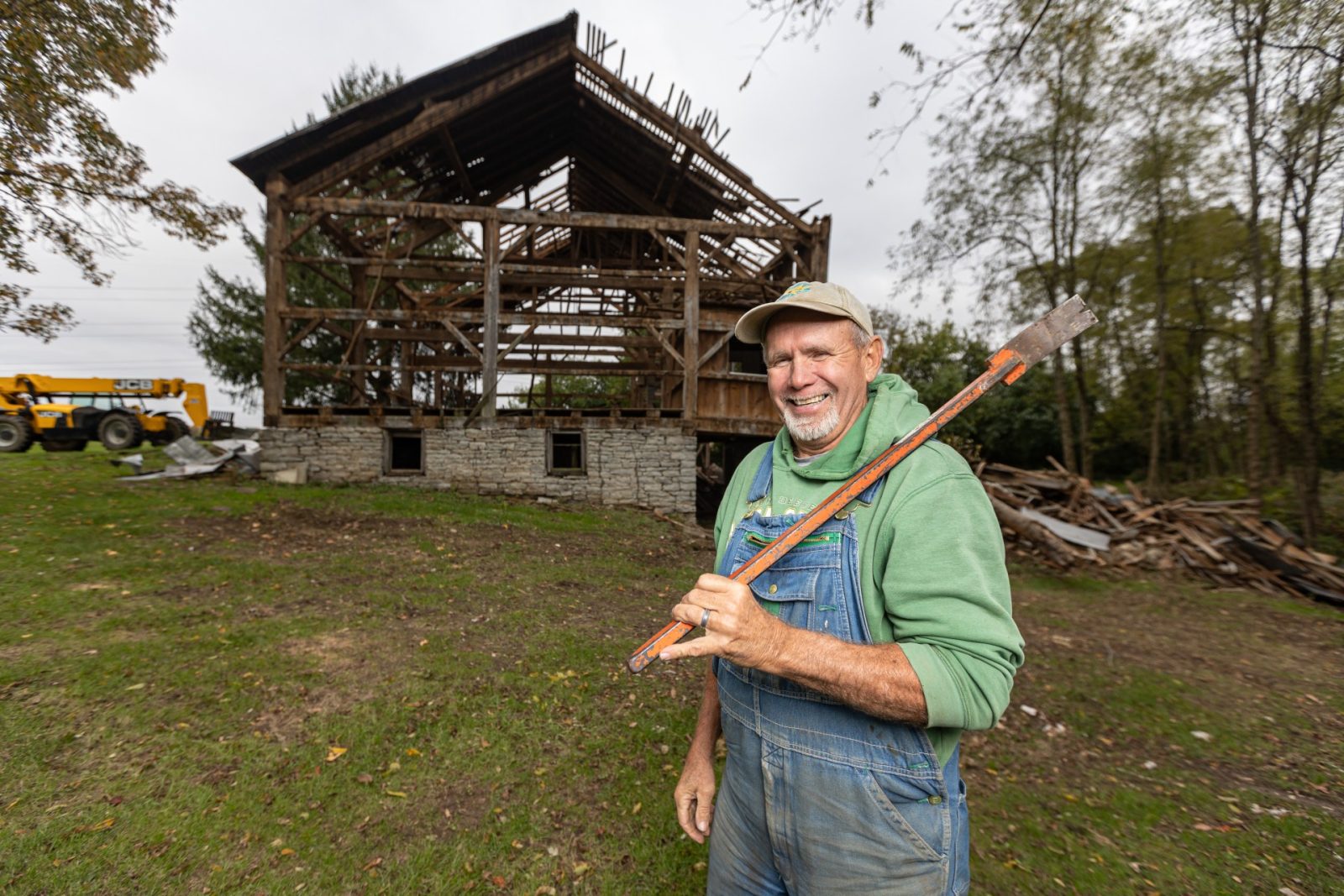 In 2006, Randy Smith was on a first date with the woman who is now his wife, when she told him that her dream home was a restored barn. Five years later, Smith has reclaimed enough wood from historic barns to have one built as the couple’s primary residence. “That’s when I really started down the rabbit hole, when I fell into the abyss,” he joked.

For years, Smith deconstructed barns on weekends before deciding to shutter his commercial roofing business and launching the Mount Gilead-based Ohio Valley Barn Salvage in 2018. Since then, Smith’s company has reclaimed, restored and relocated barns in Ohio, Kentucky, Oklahoma, Texas, North Carolina and, soon, Montana.

You may even recognize the company’s work at the recently-opened Henmick Farm & Brewery in Delaware, Ohio. Smith and crew relocated a 19th-century barn from the Lancaster area to Henmick, where it offers overflow taproom seating and an event space for the farm brewery.

OVBS works with clients on both ends, those looking to have a historic barn taken down and those looking to purchase one. And either way, it’s not a simple process. Smith said he might have to look at 150 old barns to find one that’s suitable for a client. From there, he figures to show anywhere from 4-12 different suitable barns before they find the right one. “You see it when it happens, though,” he said. “Someone walks in and immediately they fall in love and know it’s the right barn.”

For Smith and his clientele, it really is a labor of love: Both for the beautiful old barns themselves, and the intricate history behind each one. “They all want to learn the history, where the barn came from, when it was built and who built and owned it,” he said.

Smith recalled a barn he dismantled in Sugarcreek, Ohio, with the help of an Amish crew. “One of the workers had the same last name as the barn-builder’s name inscribed on the foundation’s date stone. The next day, they brought in a book that had information about the community’s history, and come to find out it was his great-great-great grandfather who owned the property in the 1850s,” he said.

If only Smith’s could be as lax.

When he’s standing in a barn that’s ready to be taken apart, he sees things like a puzzle, like a problem to be solved. The solutions come from his own meticulous record-keeping, but also

experience and expertise, involving things like the integrity of the roof and floor in particular, inspections for bees, bats and snakes in the summertime.

“These barns typically have around 600 pieces. That’s a lot to keep track of,” he said. “We did a job in Oklahoma where we had to wait several months between the time the material shipped and when we reassembled the barn. When we arrived, we discovered that chipmunks had eaten all the tags we labeled the wood with.”

Despite such scenarios, there’s not likely anything that could rescue Smith from the rabbit hole, though “I tried multiple times to get out and finally gave up,” Smith said with a laugh. “You get to the point where life’s just going to take you where it wants to drag you. I’ve accepted my fate.”

“When it’s a passion, it’s just a whole different rodeo,” he continued. “I guess I just love what I’m doing.”

If you like this, read: Daytrip Spotlight: This Ohio orchard offers one of the largest varieties of apples in the entire world