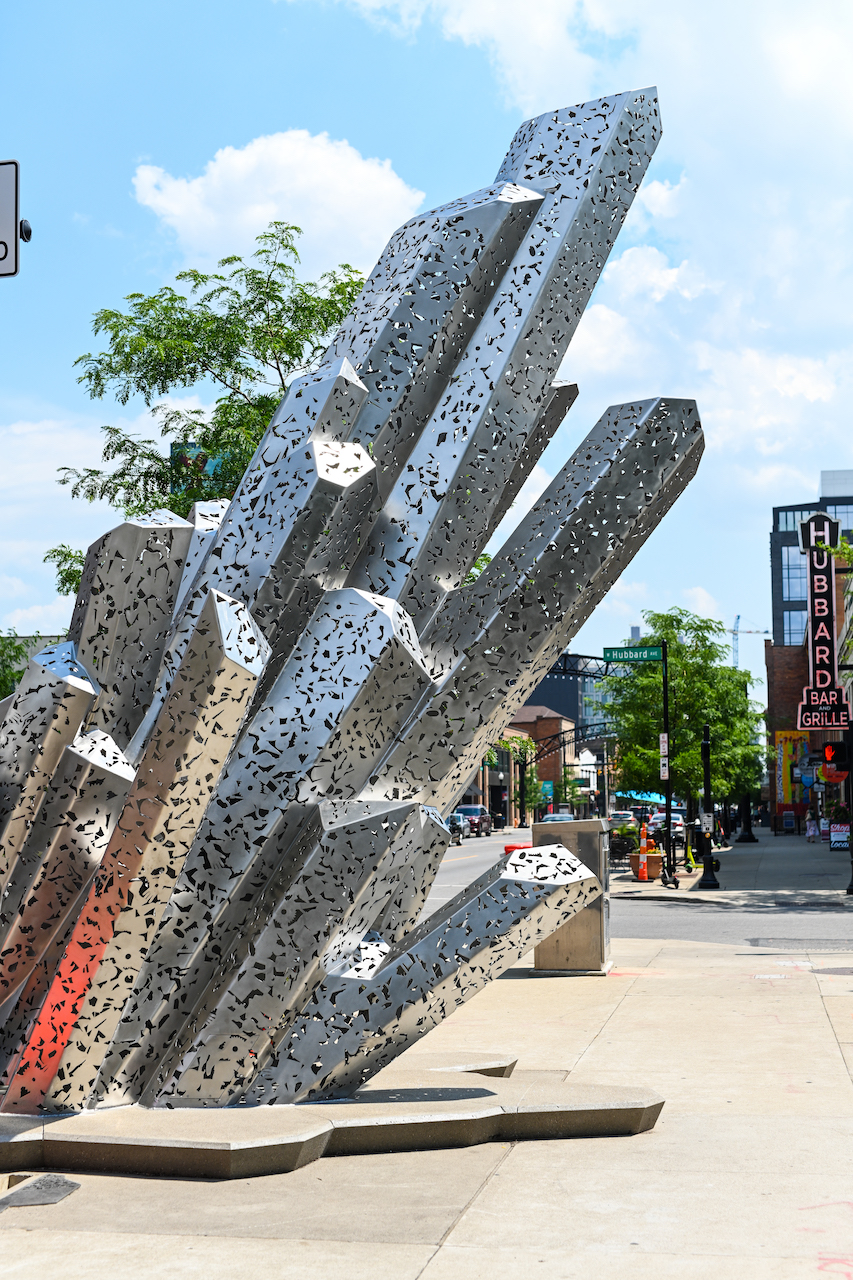 Mark Reigelman’s new public art installation in the Short North features a massive 7,000 pounds of stainless steel jutting out of the ground at almost-impossible angles. It forms a crystalline monolith that towers over viewers at heights of up to 20 feet tall.

So while it’s understandable that you might get lost in the huge scope of the project, it’s important to recognize the real heart of “The Makers Monument” — the details. The half-million dollar project that was erected at the corner of West Hubbard Avenue and North High Street in late June, features hundreds of tiny cutouts that, when viewed as a whole, depict a wide array of different objects crafted in or near Columbus throughout its history.

“What we really wanted to create was a pattern that didn’t repeat,” he said. “But that’s a lot more difficult than it seems, so we brought in someone to create an algorithm. It took several months to get it all right.”

Similar to a large-scale magic eye puzzle, the piece rewards attention to detail in a unique and satisfying way. The list of items viewers can find include a tooth, a casket, the outline of Ohio, an axe, ice cream cones, saws, and many more. According to Reigelman, there are 75 unique objects represented, and over 5,000 individual cutouts.

As its name suggests, “The Makers Monument” is a site-specific tribute to all the strange, interesting, and economy-fortifying things built in the city of Columbus, reaching all the way back to when only native tribes populated the area.

“To a lot of people, Columbus isn’t really thought of as a manufacturing city. That’s Toledo or Cleveland. But really, we are makers here, and have been for a long time,” said Columbus Public Art Coordinator Lori Baudro. “We were one of the leading makers of mining equipment [with iconic businesses like Jeffrey Manufacturing Company], but there was also a plethora of hapidasheries and glove-makers as well; smaller, interesting industries like that.”

And for Reigelman, who is currently based in New York but still considers Ohio his home, it was important to create a public installation that recognizes the often-overlooked history of the state’s largest city.

A large part of what makes the sculpture so unique is the way it can captivate viewers from afar with its massive, crystalline structures, but also reward careful, up-close attention at the same time.

“From a distance, I wanted this explosive form that didn’t follow the vertical or horizontal lines of the streetscape,” he said. “But once you get closer and you see how light starts to pass through the cutouts and cast shadows, it really pulls you in. You see this curious pattern wrapping the entire work, and if you can take time to find one nugget, more will start to unfold.”

While large-scale sculptures are nothing new to Columbus, Baudro says “The Makers Monument” serves as the city’s first real piece of “avant-garde” public art, an important milestone for the city.

And now more than ever, she says, it’s important for us to embrace public art.

“It helps to give individuality to areas where everyone can enjoy it,” she says. “You don’t have to go inside to enjoy them either, which is particularly important during COVID when people aren’t wanting to flock indoors. Really, it just provides a way to bring more art to more of the city, so everyone can enjoy it.”