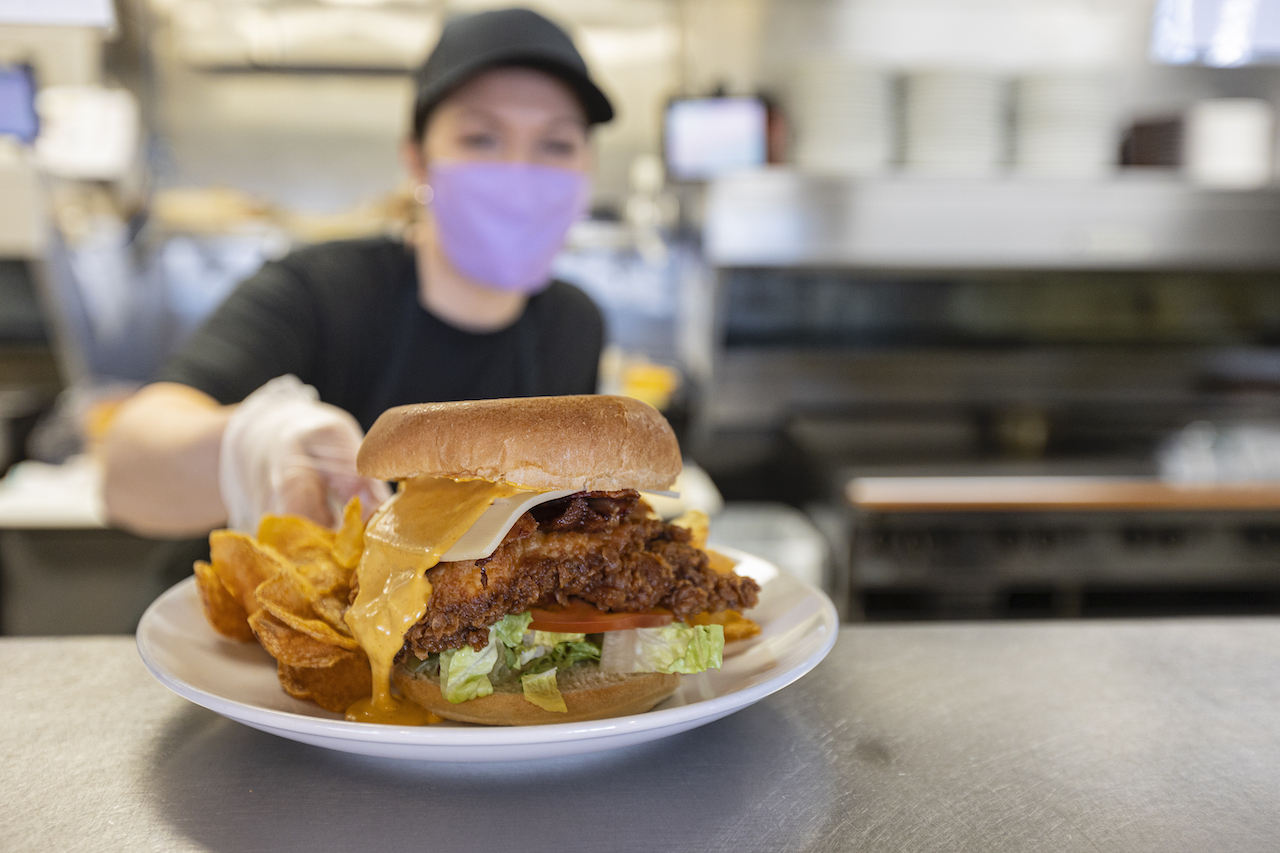 There’s no doubt that 2020 was a challenging year.

That being said, there’s at least one thing “the year that shall not be named” brought to Columbus residents that they can be thankful for every day: Fried Chicka Bang.

This fun, flashy, and undeniably delicious 90’s-themed pop-up opened its first location on Sept. 23 out of the Polaris Sunny Street Cafe (8461 Sancus Blvd.). As a pop-up, they open shop just after Sunny Street closes, operating from Wednesday to Sunday from 4-8:30 p.m. And four months later, their meteoric rise in popularity has allowed Fried Chicka Bang to open a second pop-up out of the Arena District location of Sunny Street Cafe (277 W. Nationwide Blvd.).

No matter which location you’re talking about though, it’s the same story: these are some of the best fried chicken sandwiches in the city. (Ranch-sauce-smeared) hands down.

But it’s not just Columbus residents who can’t get enough Fried Chicka Bang, either, as the eatery regularly attracts patrons from across Ohio.

“We couldn’t even have guessed how well-received we’ve been,” said co-founder Maria Swallie. “We’ve had customers come from as far away as Marion. They drive down here and eat in the car.”

The business was founded by a trio of sisters and sisters-in-law—Maria Swallie, Megan Stasko, and Meggan Stasko, with each bringing their own set of restaurant-running abilities to the table.

“We would always have family dinners and get-togethers because we live so close together, and that’s sort of how all of this started,” said Meggan Stasko. “Years before this, we were always joking around and making food together, and trying out each other’s recipes. So we just sort of built on all that.”

The three sisters all enjoy different types of food, meaning one of the projects of creating a menu for their restaurant was incorporating a wide range of flavors. While they’ve managed to pull this off—representing flavors from Nashville to South Korea—it’s ironically their menu’s lack of extraneous options that serves as one of its biggest assets. It features just chicken sandwiches, two salads, and a small list of side dishes.

“Our menu is on the smaller side on purpose,” Swallie said. “It allows us to execute everything really well, to make the orders quick, and make them consistent. When you specialize in one thing, you can really focus on making them good.”

Of course, though, no fried chicken sandwich is complete without a side of the pop-up’s signature homemade ranch dressing.

“We give ranch with every order: every sandwich, every order of fries. Especially with our spicy sandwiches like the Hotstepper or the Ghostface, you need something to cut through that heat,” Swallie said.

It’s become so popular that Fried Chicka Bang whips up over 15 gallons of homemade ranch every week, and regular customers quite literally buy it by the tub (for only $7).

“I’m sort of thinking we should just make it a drink,” Megan Stasko said with a laugh. “We should start putting it in beverages.”

More than just ranch, the eatery is truly focused on their sauces, which are all house-made. From herbed mayo to chunky bleu cheese to their own brand of “funky mustard,” Swallie says each sauce is critical in defining the flavor profile of the sandwich it compliments.

Within the pop-up’s two dessert options, Teddy Banana Graham Pudding and Bizarro Crunchberry Cheesecake, you might recognize some of your favorite childhood snacks (Teddy Grahams and Crunchberries), and that’s not by accident. The finishing touch on Fried Chicka Bang—besides that last mouthful of fried chicken perfection—is a 90s-themed atmosphere that’s just as fun and indulgent as their sandwiches. So make sure to check your next carryout bag for a free handful of iconic 90s candy as well.

“We’re delivering to so many people who grew up in the 90s, and what better feeling than to get those little nostalgic treats of Warheads and Laffy Taffies with your food,” said Meggan Stasko. “It kind of takes you back, you remember those days, an easier time. And that’s especially important during a pandemic, because it’s that little bit of happiness that we can bring to every customer.”