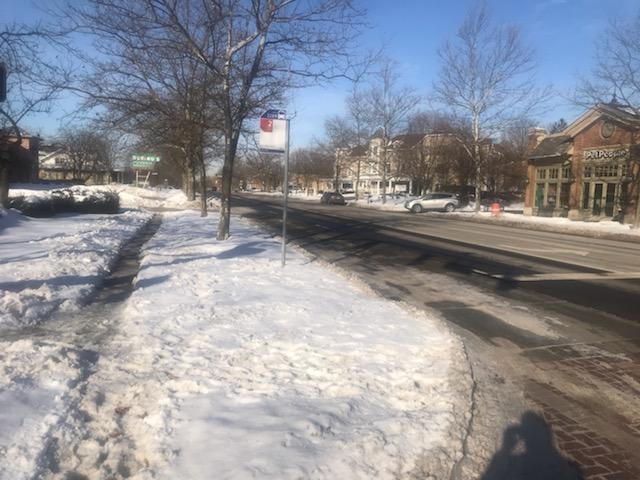 When you first wake up on a crisp, cold February morning to see your neighborhood blanketed in a fresh layer of snow, it’s a beautiful sight.

Beautiful as long as you’re not a local business owner.

Although the amount of snowfall Columbus actually received over the course of Monday night didn’t match up to earlier predictions, some of which estimated six inches of accumulation, it was the combination of ice and fresh snow that led to widespread closures on Tuesday.

A multitude of local businesses ended up shutting their doors, some even for days at a time. Some spots, like Nocterra’s Powell taproom, closed early on Monday in anticipation of the storm. Others, like High Bank Distillery, The Royce, and Brown Bag Deli, (among many others) decided to close shop entirely on Tuesday.

After shutting down early on Monday, Mazah Mediterranean Eatery was another restaurant that decided against opening yesterday, Feb. 16.

“We were open on Monday and the day started out normally, but then we just weren’t getting any orders,” said owner Maggie Ailabouni. “And I’m glad we did close down too, because even if we started to get more orders, I was worried about our drivers. The conditions were pretty bad, and that’s not always something people think about.”

Ailabouni noted that employee and customer safety was also one of the largest factors in Mazah’s decision to remain closed throughout Tuesday. “I went outside and I fell into the snow,” she said. “So many employees, drivers, customers, they might not be able to shovel their driveways, get their cars ready, get the whole city ready.”

The Mazah owner also stressed how difficult it was to close down for long stretches at a time, and said she believes it will compound the setbacks places like her restaurant are facing due to COVID-related drops in business.

“With the pandemic, we’re just trying to stay afloat every day, and this is just more we’re missing out on,” Ailabouni said.

And while many businesses—especially those depending on delivery drivers and travel—felt their decision to close was the right move, others that closed down yesterday weren’t so sure.

Many spots, including the popular Grandview restaurant Cleaver, decided on Monday, Feb. 15 to close yesterday, due to forecasts predicting a massive snow dump on Columbus. And while ice was still an issue for many, the amount of snow the city actually received didn’t match the high levels predicted.

Owner Tony Tanner believed the Grandview eatery would be snowed in following the ominous weather predictions. As they only ended up with several inches of snow—leaving the eatery fully accessible—he wished the spot had stayed open.

With more winter weather possibly on the way tomorrow, we’ll see if businesses are able to shake off a few more inches.