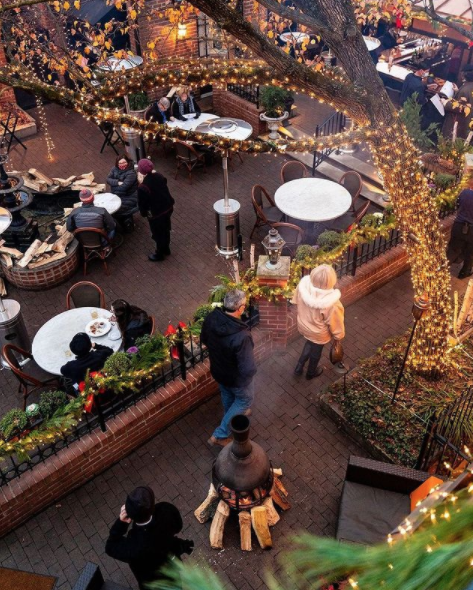 A Taste for Travel: The Kitchen’s dinner and a movie series goes global

If you haven’t been to “Lindey’s Lodge” yet, we have good news.

The Lodge, barring any unforeseen weather fiascos, should remain open for the winter, according to Director of Catering and Sales Grant Cassidy.

The Lindey’s outdoor area typically shuts down around Halloween, Cassidy said. The space opens for one night to celebrate the German Village Society’s annual Village Lights in December before shuttering again until May.

Because more people have been open to dining outside, and to provide more options for those who feel uncomfortable dining indoors during the pandemic, Lindey’s decided to keep its Lodge open longer than normal, Cassidy said.

In December they transformed it into a holiday-themed patio, outfitting it with about 15,000 white lights draped on trees, around the bar, and on fences.

The space includes about 17 tables, spaced-out bar seating, and three lounge areas. Each lounge area now has a fire pit, and nearly every table has its own tall heater.

Last month, the Lodge was so popular that the waitlist for the area was about two to three hours long. (No waiting is allowed onsite; guests are called when their tables are ready.)

Although the space is still popular, the waitlists aren’t nearly as long, Cassidy said. Now, the Lodge is open Thursdays, Fridays, and Saturdays. Guests are advised to BYOB—bring your own blanket, that is.

As long as weather doesn’t prove to be a safety hazard, Cassidy said he anticipates keeping the Lodge open permanently.

“We’ll see if we could just keep this going,” he said.