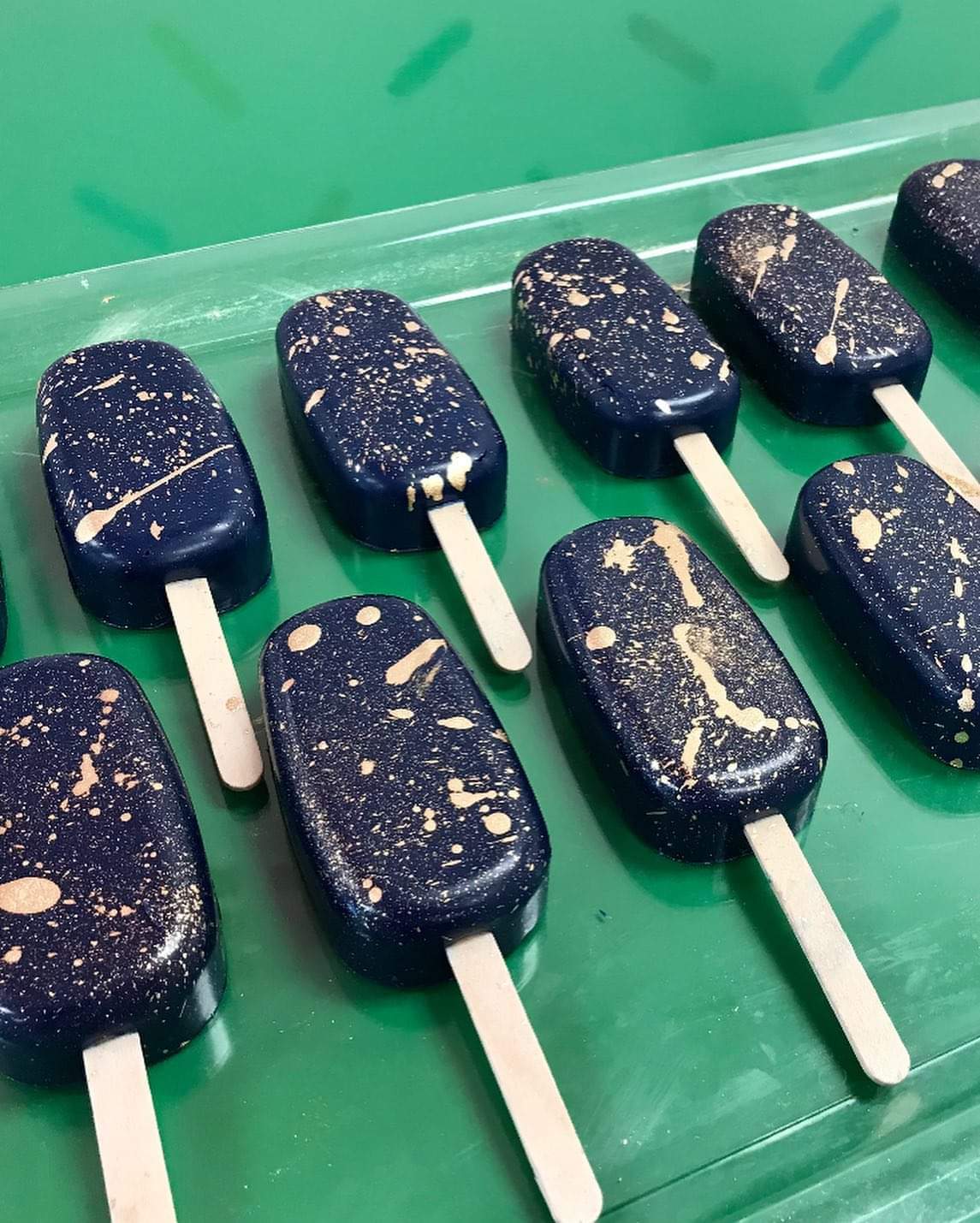 Welcome to the summer of the cakesicle.

These sweet treats, which feature rich cake inside a crisp chocolate shell that’s served on a stick, were relatively uncommon until recently, but now they’re catching on like wildfire in Columbus. Popular confectioners like Sugar Rush, Angie’s Rainbow Cookies, That’s Sweet, and more are all featuring their own version of the cakesicle.

And we can’t get enough.

But first, you might be wondering, what’s the difference between a cakesicle and a cake pop?

The first and most obvious distinction is size. Cake pops are crafted by hand-rolling batter into a ball and simply dipping it into liquid chocolate (which creates their signature outer shell). Cakesicles rely on a full-sized popsicle mold, which is usually brushed with liquid chocolate that hardens and is later filled.

According to Sugar Rush owner Mandy Miller, size alone can be a gamechanger. Not only does it help them last longer than cake pops, it makes an even bigger difference aesthetically.

“Because they’re bigger, because there’s more surface area, you can do so much more in terms of design and decorating with a cakesicle.” she said, noting the sweet shop even crafted a Yoda-themed cakesicle for May 4 this year. “They’re sleeker and more modern-looking.”

While cake pops were never a huge hit in the events space, according to Miller, cakesicles have become wildly popular treats for weddings and parties, and Sugar Rush has seen orders flying in since the state’s restrictions on public gatherings began to lessen.

And there’s no shortage of other eye-catching cakesicles throughout Columbus. Sunshine & Sugar Bakery creates a pastel-pink variety dotted with edible gold flakes and swirling frosting patterns, and Happy Sweets, which specializes in the trending treats, sells them in nearly every color imaginable, from green offset by slashing white lines, to an all-white cakesicle dotted with chunks of black Oreo cookie, and even some covered in Lucky Charms cereal.

While most spots sell the “classic” cakesicle, featuring a hard chocolate shell, some vendors like Angie’s Rainbow Cookies are breaking the mold. Literally. Angie’s is offering a riff on the cakesicle that closely resembles their namesake cookie: six layers of rainbow-colored cake with a drizzle of chocolate at the tip, but without a shell.

And just like their crunchier counterparts, these are going fast too.

“We offered them at Clintonville Farmers Market on saturday. I sold out and have several preorders for large amounts throughout the month,” said Angie’s owner Betsy Tiano.