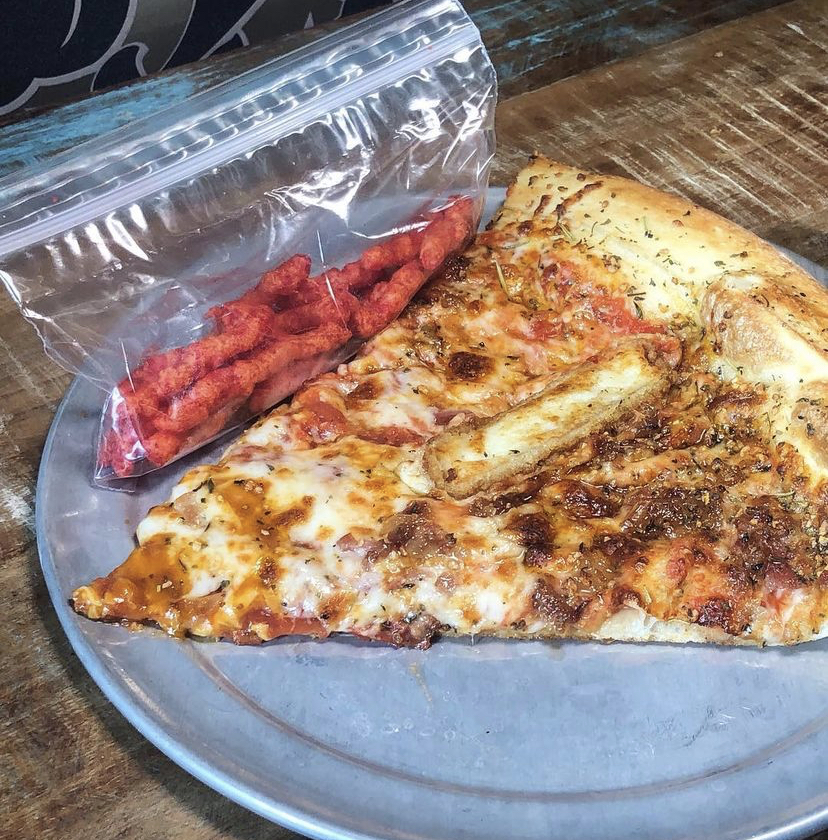 While this new limited release from the inimitable Mikey’s Late Night Slice may be a humorous nod to the goofy green stuff, you definitely don’t have to partake to enjoy this one.

Of course, we’re talking about Mozzarella Kush, their newest speciality pizza, available only at Mikey’s locations through April 25.

This seasonal pie has been a favorite at Mikey’s locations for several years now, and so far the 2021 version has lived up to its billing.

“They’ve been selling fast, and not surprisingly people are really into it this year,” said a manager at the 668 Grandview Ave. location.

Like its name suggests, Mozzarella Kush doesn’t skimp on the cheese: It’s layered on thick over a classic red sauce base.

And here’s where the eatery—known for its wild and inventive pizzas—doesn’t disappoint.

The pie is topped with bacon, mozzarella sticks (you read that correctly), and served with a “dime bag” of Flamin’ Hot Cheetos on the side, adding both heat and texture to the indulgent dish.

The finishing touch on Mozzarella Kush comes as an over the top drizzle of their signature—and insanely delicious—Unicorn Sauce, which imparts a touch of smokey, spicy, tangy, and sweet flavor all in one.

You can even buy a la carte bottle of the sauce right here if you’re so inclined.

Just do yourself a favor: Don’t ask what’s in it.

“Can’t do it, I can’t tell you what’s in the Unicorn Sauce. Before I started working at Mikey’s I had to sign off saying I wouldn’t disclose what was in it, so the sauce is pretty top-secret,” the Mikey’s Grandview manager said. “But I will say it’s a combination of several other sauces, plus a few special ingredients.”

So while Mikey’s might be tight-lipped on the sauce topping this speciality pie, it’s no secret that Mozzarella Kush is a decadent must-try. This pie won’t be around long, so make sure to pick some up while you still can.