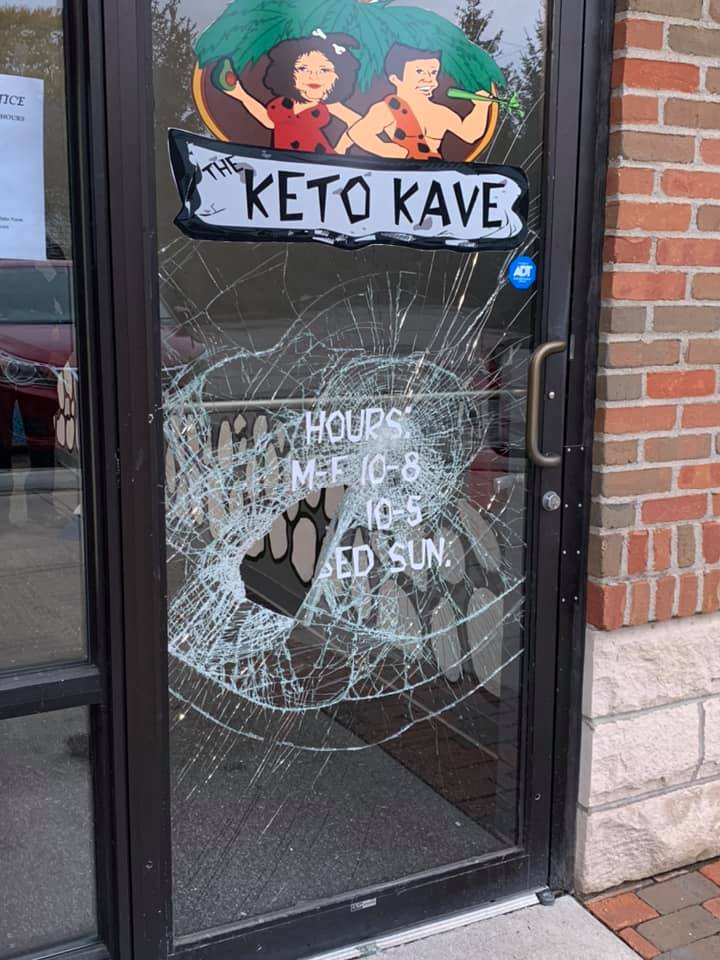 Photo courtesy of The Keto Kave

In the early hours of Sunday morning, a pair of Clintonville businesses were vandalized and robbed, representing the latest incidents in a recent slew of North Side burgalaries.

Libby Lou’s Fun Factory, the Clintonville sweet shop selling a unique line of Extreme Shakes and baked goods, was broken into at 6:34 a.m. on Oct. 31. A brick was thrown through the store’s front window, and its cash register was stolen.

Located at 3039 Indianola Ave., Libby Lou’s initially announced it would be closed while addressing the break-in, but was able to open later in the day, at approximately 12 p.m.

The Keto Cave, a new grocery and take-and-bake meal store for ketogenic diets, was also victim to a similar incident yesterday.

According to co-owner Susan Van Ness, she received a call from The Keto Kave’s ADT alarm system at 7:06 a.m. Sunday morning to notify them of a break-in. The glass front door of the business was shattered by a rock. A perpetrator entered the store, but didn’t take anything of value.

That’s in part, Ness said, because the recently-opened business is lacking much of its stock.

“Right now, there’s really not much in here,” she said. “Due to shipping issues, a lot of our stuff is still out on a ship. We haven’t been able to fully open the retail store.”

While Ness is waiting for more evidence before making a firm conclusion, she believes it’s likely the Libby Lou’s robbery is connected to the break-in at her store.

The Keto Kave is located at 4818 N. High St., just over three miles north of Libby Lou’s. According to multiple GPS applications, the two locations are eight minutes apart by car. The break-ins occurred 32 minutes apart.

This week alone, a string of similar robberies have been committed in the area north of downtown Columbus.

On Oct. 27, a window in La Chatelaine Bakery & Bistro’s Worthington location was shattered, and pieces of the restaurant’s equipment were stolen.

Van Ness also said she has communicated with several other nearby business owners who experienced recent robberies. Ness stated that an area convenience store was broken into—in similar fashion—during the early hours of Oct. 27 as well, and multiple cartons of cigarettes were stolen.

The store did not return a request for comment.

“All of this, it’s frustrating,” Van Ness said of the robberies. “With where we’re at right now, it hits a nerve.”

According to Rhome Ruanphe, owner of Buddha Bowl, a new Clintonville eatery, robberies have been an ongoing issue for many local businesses for some time.

His Brewery District eatery, Basil Thai Restaurant, experienced an almost identical robbery last winter. “[It was the] same. Brick through the window, and they stole the register,” he said.

He noted that during the same week he was robbed, two other Brewery District restaurants experienced similar incidents as well.

“We don’t keep cash on site anymore,” he said. “It’s been all credit since last year at all my places.”

614now will continue to provide coverage on this issue, make sure to check in regularly for updates.