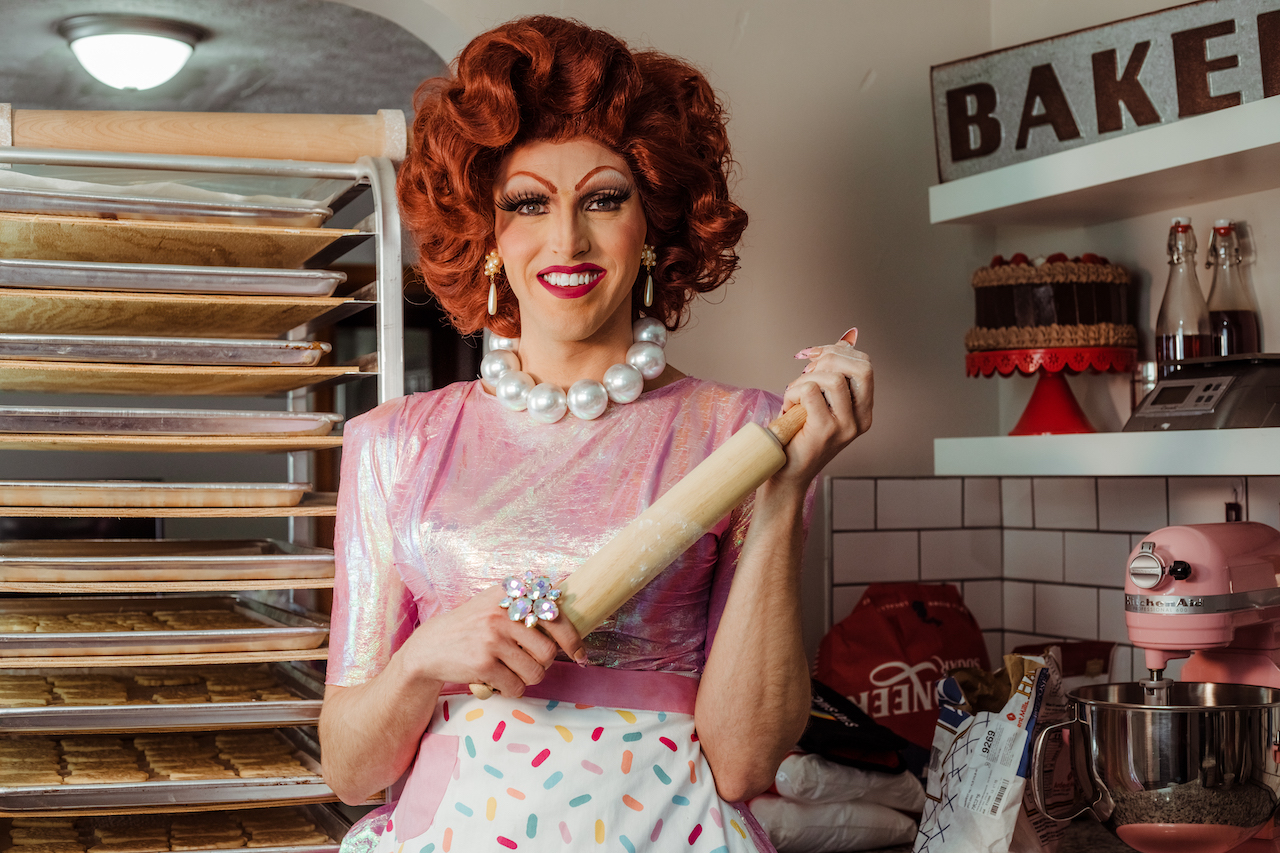 An embalming machine and a box of rat poison might not be the first things that come to mind when you think about cookie decorating, but they’re two examples of treats Alex Copeland has made for happy clients.

“I’m really fortunate that I’m really busy with what I do,” Copeland said, adding that the embalming machine cookie was part of a cookie package for someone who worked at a morgue, while the box of rat poison was part of a cookie collection celebrating a dog’s life by illustrating items said dog had eaten over its lifespan.

Copeland has been creating custom cookies for clients since launching home bakery Plenty ‘O Cookies in April 2015 as a way to have more freedom to schedule drag shows when he wanted (under the moniker Plenty ‘O Smiles).

But the 30-year-old Columbus resident’s drag queen cooking baking gambit has blossomed to include cookie decorating workshops featuring Copeland dressed in drag. During his workshops, Copeland serves as a facilitator. Some guests will follow everything he does, while others will do their own thing. But regardless of what their cookies end up looking like, Copeland said he just wants his cookie decorating novices to have fun.

“I want them to leave feeling encouraged and good about what they did,” he said.

During the pandemic, Copeland has been booking a lot of decorating workshops with colleges and universities, shipping the products to students and decorating together virtually. But now, Copeland is in the process of renovating his basement to serve as a full bakery kitchen, and he hopes to finish the job in August and begin hosting some workshops in-house as well.

Copeland said he initially debated whether to include his drag persona in his baking business, for fear of appearing to make the business more about himself than his baking.

Many people he talked to said they thought the idea of a drag queen baker was a cute one, though a couple of people were against it, Copeland said. But he felt anxious about making such a big decision that would ultimately affect all his future business plans.

“One day I just decided to do it, and no matter what, stick by it,” he said.

The decision ended up being a boon for business. Copeland had already established a fan base for Plenty ‘O Smiles prior to starting up Plenty ‘O Cookies, and people were really supportive. And once a friend who knew him from his drag persona began ordering two dozen cookies to sell at a weekly farmers market, Copeland was able to get his name out in a bigger way.

While the farmers market offered Copeland an opportunity to practice a variety of designs, perhaps the biggest help to his fledgling business at that time was the online cookie community.

“I’ve learned so much from my cookie decorator friends over the years,” he said, adding he hopes to eventually diversify his selection by baking more cakes, macarons, and cookie varieties.

For now, he said he enjoys his connection with clients, and the stories behind the cookies they ask him to make.

“Each time it’s a little bit different,” he said.