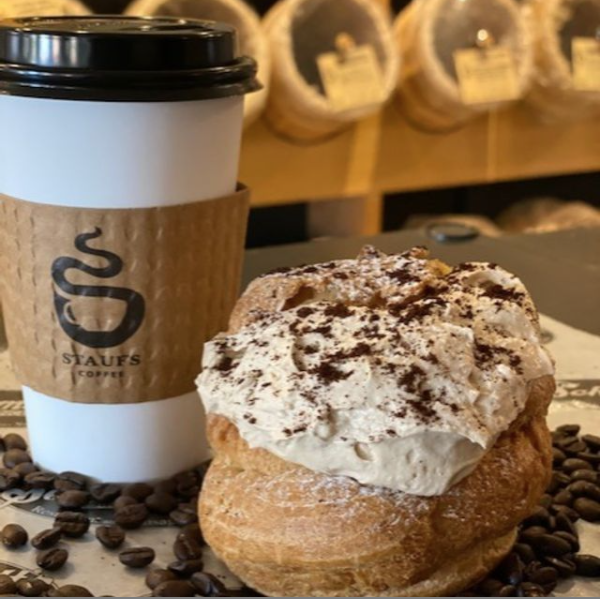 If only all partnerships were this sweet.

Schmidt’s has started 2021 out on a high note, with their Stauf’s Latte Puff, available only for the month of January.

Matt Schmidt, brand ambassador, said he’d been wanting to do a coffee-flavored cream puff, which was something the restaurant hadn’t done before.

The collaboration with Stauf’s is the second-ever partnership that Schmidt’s has done for its Cream Puff-of-the-month.

The first was in September, with Graeter’s Black Raspberry Chocolate Chip.

“We sold so many cream puffs,” Schmidt said.

Schmidt said the collaborative cream puff helped get people out to their food truck and restaurant at a time when events were being canceled. Schmidt’s even set up a pop-up tent in front of a Graeter’s location in Cincinnati.

“There was a line around the Graeter’s before we even opened,” he said.

Schmidt said the eatery wants to do a collaborative Cream Puff-of-the-month ideally on a quarterly basis moving forward—the monthly cream puffs have been a staple for the last four years.

As we wait for the next collaboration, we can look forward to Schmidt’s strawberry-flavored cream puff for February, and their pistachio cream puff for March.

These are the traditional offerings for Valentine’s Day and St. Patrick’s Day, Schmidt said, and they’re both always big hits.

If anyone is interested in collaborating with Schmidt’s on future cream puffs, they can contact Schmidt via [email protected].

In the meantime, we’ll be making it our weekend mission to try the Stauf’s Latte Puff. We’ll see you there.