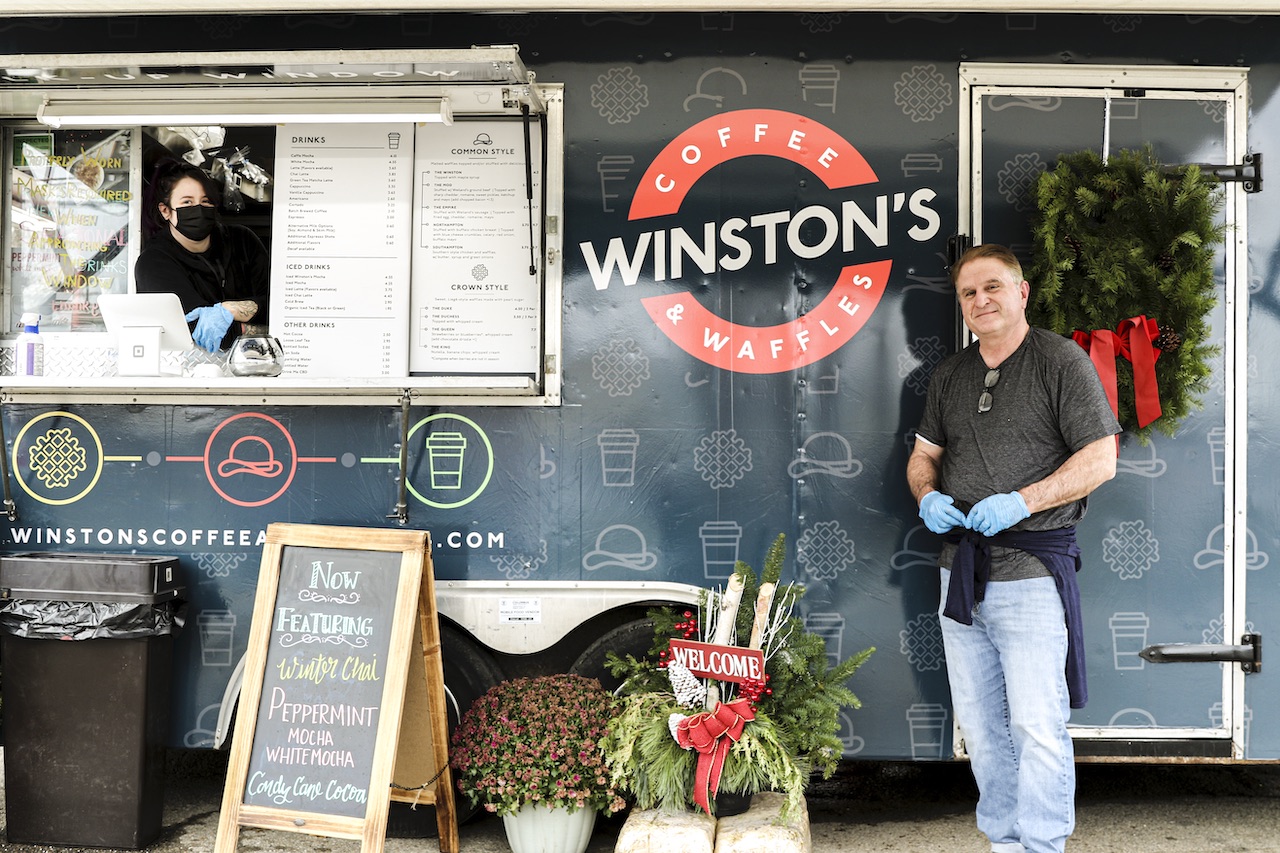 Winston’s Coffee and Waffles comes to Clintonville—as a trailer

Control. Who doesn’t want to have control of their personal and professional lives? Owner and proprietor of Winston’s Coffee and Waffles Steve Eslhoff certainly does, and the Columbus food scene is better for his decision.

Elshoff, a Worthington native, got his first taste of the food service industry as a teenager, while slinging pizzas at the now defunct local pizzeria chain Franco’s.

“My buddies and I worked at all three locations and we had the time of our lives,” Eshoff said. “I was able to spend time with friends, loved my bosses, and was part of a great community. It was honestly one of the more rewarding times of my personal and professional life.”

After high school graduation, Elshoff considered making a career in the food service industry, but college beckoned and those dreams were put on hold. In undergrad, Elshoff became enamored with production and moved to Chicago and New York City, where he worked on nationally televised programs such as “The Jerry Springer Show” and “American Justice.” (For those wondering, Elshoff reports that Jerry Springer and Bill Curtis are kind people and true professionals).

“In my twenties and thirties, I didn’t hit it big as (a) famous drummer and didn’t have my own pizza shop. I was happy with what I was doing, but was never truly in love with my career,” Elshoff said. “Food and community kept calling, but I didn’t have time to answer.”

The bug never disappeared, though. After decades in the production business, Elshoff finally decided to get back to his roots, become his own boss, and make a run at the food service industry.

After brainstorming with local chefs, restaurateurs, and food service friends, Elshoff decided on a truck and waffles. It was not an easy decision, as many factors played into this choice. But hard work gave way to good luck, and Elshoff quickly found himself owning and operating a food truck in the heart of Clintonville.

Winston’s (named for personal inspiration Winston Churchill) checks a lot of boxes in the Clintonville food scene. For starters, the truck has a full espresso bar that offers specialty drinks as well as Crimson Cup Coffee.

“There are a few other wonderful coffee shops in Clintonville, but none too close to us. We want to become the local’s choice for their everyday coffee,” Elshoff said.

And of course, we can’t forget about the waffles. Coming in two distinct styles, Winston’s offers a waffle for every occasion.

The first style, called The Common, uses a robust malted waffle batter. The dish is filled with proteins and finished with creative, fresh toppings. For instance, “The Empire” (the most popular menu item) comes stuffed with house-made sausage from Weiland’s Market and is topped with a fried egg, sharp cheddar cheese, romaine, mayo, and green onions.

If the concept still sounds fuzzy, picture a traditional Chicken and Waffles entrée with chicken on top of the waffles. At Winston’s, this entrée is called the Southampton, and has the fried chicken INSIDE of the waffles, which are then topped with syrup, butter and green onions. This version of Chicken and Waffles is an innovative and unpretentious take on a comfort food classic, as well as rich, tasty and budget friendly.

Rounding out The Common are the Northampton, a spicy buffalo chicken breast concoction topped with blue cheese, shaved celery, red onion and buffalo mayo; The Mod, a mixture of Weiland’s house made ground beef topped with sharp cheddar, sweet pickles and romaine; and The Winston, the syrup-topped malted batter waffle that started it all.

The second type of waffle, The Crown, is a lighter production that could almost be described as a pastry. These waffles are liege style, which means they are made with yeast and pearl sugar cubes that caramelize into the batter when cooked.

Choose from either The Duke (plain), The Dutchess (heavy whipping cream), The Queen (whipped cream, blueberries and strawberries), and The King (Nutella, banana chips and heavy whipping cream). All are sweet and saccharine daydreams. “I am not a chef and I am not particularly even a foodie,” Elshoff said. “I just want to be my own boss, serve some delicious food, and bond with my community.”

Winston’s Coffee Coffee and Waffles is located across the street from Weiland’s Market, in the heart of Clintonville, at 3589 Indianola Avenue.