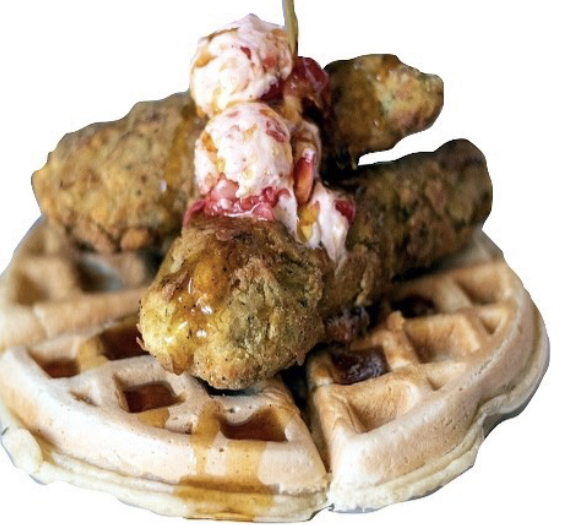 If you’ve found yourself wondering where exactly the rest of the summer went, you’re not alone.

But just before this season gives way to heartier fall menus and Pumpkin Spice everything, let’s make a stand. From sweet and spicy fried chicken to purple Crunchberry pie, these must-try new dishes are summer’s last hurrah in the Columbus.

Fay’s has finally reopened in a brick and mortar storefront, and they’re bringing a brand new dish with them. While the spot is obviously known for crepes, this classic chicken dish is absolutely nothing to sleep on either. It combines two smokey drumsticks on a fresh waffle with strawberry, powdered sugar, and garlic habanero syrup.

Most times we’ll save a dessert for the end of these lists, but today we couldn’t resist. This pie from the High Street bakers is something special. This classic sugar cream cream pie uses milk steeped in Captain Crunch Crunchberries. The resulting flavor (and appearance) of this daring dessert is just as tasty as it is nostalgic.

This isn’t the same old insipid school lunch-box bologna we’re talking about. The dish from this indulgent food truck starts with a sizable chunk of bologna from Falter’s Meats and sears it to perfection. It is then served on a toasted brioche bun with lettuce, red onions, Jarlsberg cheese, and grainy mustard.

Since we already have dessert near the top of the list, why not end with breakfast? But don’t get it twisted, this new dish is last but far from least in our minds. It features a sausage patty, eggs, cheddar Jack cheese, and local maple syrup sandwich between two silver dollar pancakes buns. This is the objectively correct way to start your day.

If you like this, read: Sweet and savory crepe vendor now open at Easton

According to Taste of Hilliard voters, these are the city’s best places to eat