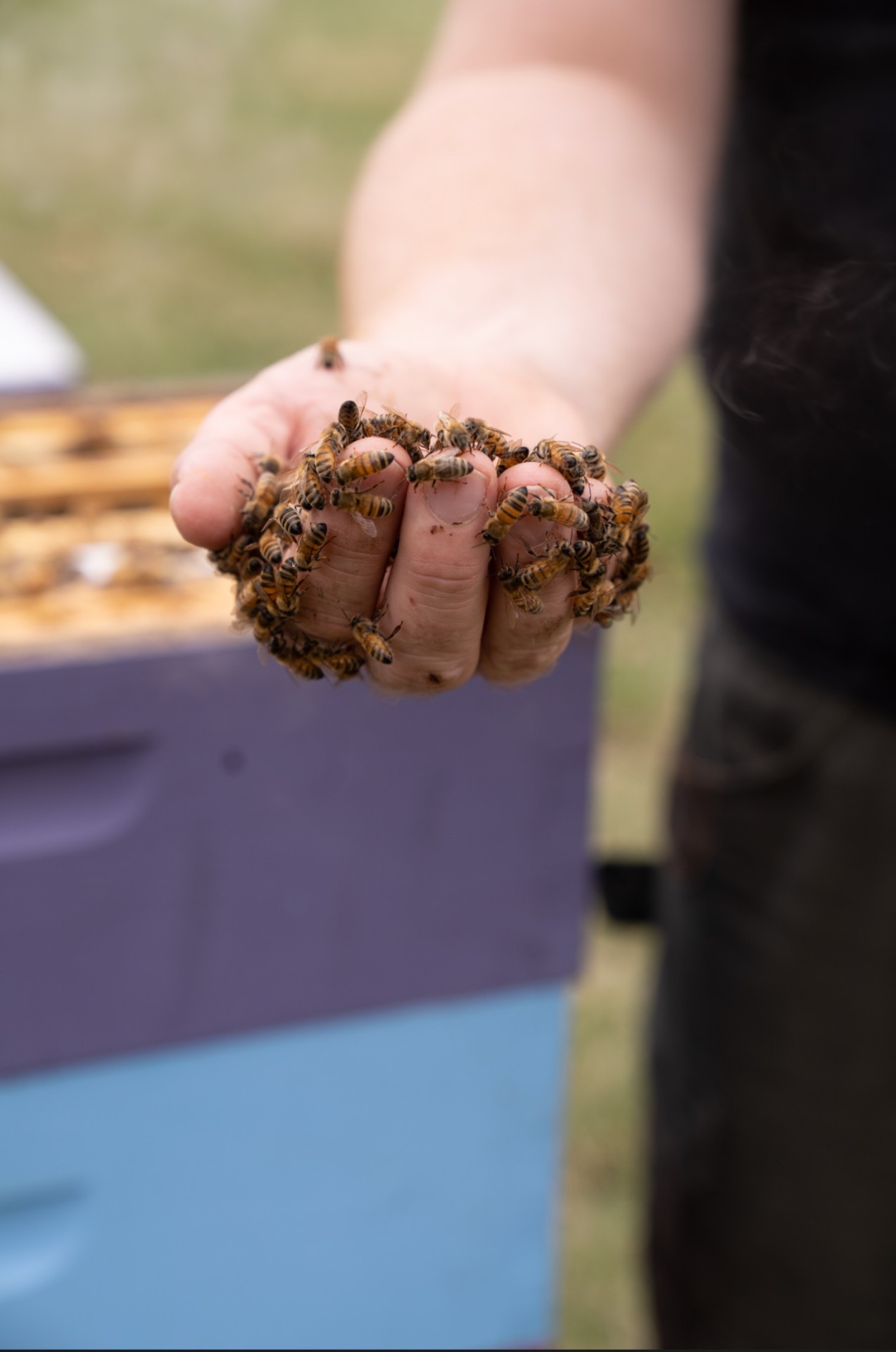 The smoke pools around his face; his outstretched fingers.

When it clears enough to see, the hundreds, if not thousands, of insects take shape: Dave Noble’s entire hand is covered in a pulsing mass of bees.

But for Noble, an experienced beekeeper, bee educator, and now a bee entrepreneur, this is simply all in a day’s work.

“I have a very good relationship with my bees; I rarely get stung,” he said. “Do they recognize me? No, probably not. I believe that bees are the best teachers though; if you know how to listen, they’ll show you how to act around them.”

For the imposing six and a half foot tall beekeeper—whose massive frame belies the patience and quiet care he practices with each individual insect—the love of beekeeping has been with him for decades, buried under the skin like a spent stinger.

“It started when I was a student at OSU; I had originally intended to study plant pathology, which dovetails a lot with beekeeping,” Noble said. “Then when I was exposed to Ohio State’s Honeybee Research Lab and my mentor Sue Cobey, things just kind of took off.”

And it was through Cobey that Noble began to not just learn about bees, but to teach others about them as well, something he continues to this day by offering a wide range of beekeeping classes at the Columbus Garden School.

Today, Noble also owns and operates the pandemic-born business Red Beard Bees. This means he’s around the insects constantly, housing roughly 65 hives across several properties. He even keeps a number of hives at his personal home in New Albany

“I look forward to my work with the bees, to spending time with them. Having so many of them here at home now does not mean that I have unwittingly thrown my work-life balance out of whack,” he said. “Quite the opposite really. It has helped me to integrate my work and my life. It may sound corny, but the bees have helped me to realize what my life’s work is.”

While honey, as you might expect, is a significant source of income for Red Beard Bees, Noble dips into other more unique markets as well.

One of those markets is selling queens.

“Queen bees will mate with as many as 30 drones in the first 12 days of their lives; it’s all about genetic diversity. I sell fully mated queens for $40,” Noble said, noting that a queen—unlike many bees which live for only weeks—can sometimes survive for more than five years.

“My goal is to eventually make selling queens as big or bigger than my honey sales,” he added.

Noble is also planning to begin selling beeswax for candles as his hive numbers continue to grow, aiming to build a business that’s as diversified as possible.

Diversified, that is, within the world of beekeeping.

That’s because, for all his gregariousness and openness as an educator, Noble revealed that bees are his passion, and he’s aiming to do as much as he possibly can with them. Whether he catches a few stings or not.

“I love teaching people, I love seeing them learn,” he said. “But for as much as I like people, I think I actually prefer bees. That’s where I’m at now.” He said with a smile.

If you like this, read: Meet the man, and the rollercoaster story, behind Central Ohio’s first Black-owned craft brewery