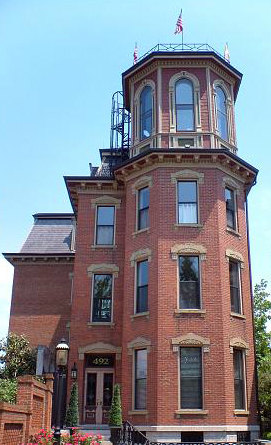 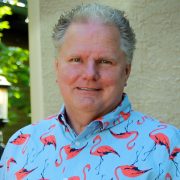 The turret of the tall, brick mansion peeks above treetops and other roofs along South Third Street in German Village.  If a man wanted to sunbathe in the nude up there, he would be pretty easy to spot.  And that’s exactly what the original owner did during warm weather.  On days that were too chilly to enjoy the sun al fresco, he would retreat to his fourth-floor, octagonal-shaped sunroom with floor-to ceiling windows – occasionally turning his sofa to maintain maximum exposure.

The story goes that young Frederick Schwartz came across the Atlantic, perhaps in the late 1870s, in search of a city to practice his trade as a pharmacist and to build a huge house for the fiancée he left behind.  Schwartz found a comforting community of fellow Germans on the near south side of Columbus, built his house at 492 South Third Street and then promptly wrote his fiancée with the good news.

In return, Schwartz received a “Dear Johan” letter.  Yes, his betrothed had found someone new.  And this is where the story turns dark.  Frederick, thoroughly dispirited, seemed to give up on life, itself.  He stopped cutting his hair and beard, both of which turned snow white.  He began eating only what he could grow in his small garden and barley from local brewers.  He drank only milk and whatever water he could collect in his rain barrels.  He wore only woolen clothing, and he began going shoeless, even in the snow.  Schwartz continued sunbathing, but he never married.  And he died alone.

Years later, neighbors began to report nighttime sightings of a naked, ghostly apparition climbing the old, iron stairs to the top of the turret.  Surely, it was Schwartz, continuing the unusual ritual he had started while still very much alive.

This oft-told story is a mix of fact and fiction.  Schwartz wasn’t from Germany.  He was born in Niagara Falls, New York, in 1836.  There was no love interest back in the Old Country.  As a small child, he and his family moved to Columbus and took up residence in a small house on the very lot where he would later build his “castle.”

As for some of his documented eccentricities, Schwartz adhered to something called the “Sanitary Movement,” an approach to public health in the 19th century designed to protect people in an age when disease was rampant.  That was the reason for drinking rainwater and, perhaps, to adopting a vegetarian diet.  Going without shoes was another matter, altogether.

It’s believed Schwartz had decided early in his adulthood to remain a bachelor, and that he built his mansion in hopes of persuading his two sisters to marry and raise large families under his roof.  His role would be as patriarch and benevolent uncle.  But the two sisters showed little interest in marrying, instead content to fill their days with cooking and housework.

And that was the life of Frederick William Schwartz – until May 11, 1914, when he died of old age in his sunroom, with his doctor and one sister by his side.  There are no details on what he was wearing.